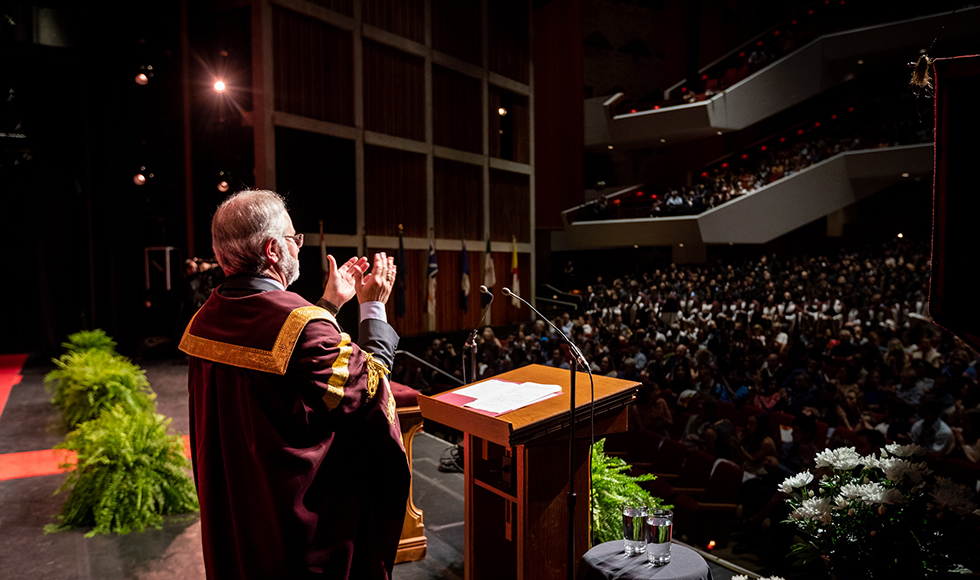 Donna Strickland, who earned her undergraduate degree in Engineering Physics at McMaster and went on to earn the 2018 Nobel Prize for Physics, is to receive an honorary doctoral degree at McMaster’s Spring Convocation ceremonies.

She is one of 12 distinguished figures whose achievements in fields such as health care, science, Indigenous rights and philanthropy are being recognized in 11 ceremonies that begin with Nursing May 22 and Health Sciences May 23, and resume for Convocation Week beginning June 10.

In order of presentation, here’s a look at who will be receiving honorary doctoral degrees in ceremonies this spring:

Flaherty served in many senior roles in 37 years at Hamilton Health Sciences before her recent retirement as executive VP of clinical operations. Flaherty, a McMaster Sociology graduate, is regarded as a key figure in shaping health care in Hamilton and as an influential teacher, mentor and community volunteer.

Shanahan is a global leader in gastroenterology who served as a McMaster research fellow from 1981 to 1983 and is today Chair of Medicine at University College, Cork, Ireland. An inventive and prolific immunologist and microbiologist, he is regarded for his humanity and literary insight.

Cascioli is a Hamilton businessperson and philanthropist who took Lakeport Brewing from bankruptcy to a $200-million sale to Labatt. A 1983 McMaster Commerce graduate, today she focuses on community efforts through her charitable foundation and writes books to help children develop financial literacy.

Paul Desmarais Jr., a leading figure in international business, is chair and co-CEO of Power Corporation. Hélène Desmarais is founder, CEO and chair of the Centre d’enterprises et d’innovation de Montreal, a successful incubator of technology businesses. Both husband and wife are celebrated as leading philanthropists and volunteers.

O’Reilly is a distinguished lawyer highly regarded for defending Indigenous rights across Canada, including fighting Quebec’s James Bay hydroelectric project in 1973, and representing Mohawk land claims in the Oka crisis of 1990. His advocacy has earned acclaim in Indigenous and legal circles.

Dear, an acclaimed social and urban geographer, began his teaching career at McMaster and went on to teach at USC and Berkeley. His research on mental health and homelessness has influenced generations of researchers, and was based on field work in Hamilton and Toronto.

Mann is a world-renowned pioneer in climate science whose famous “hockey-stick” graph showed the alarming rise in global temperatures over 800 years. The Penn State professor continues to defend his science and educate the public despite sustained abuse from climate-change deniers.

Rappaz, an emeritus professor at the Ecole Polytechnique Federale de Lausanne, is a globally recognized leader and mentor in materials science. His research has made major contributions to the steel and aluminum alloy casting industries.

Strickland, a 2018 Nobel laureate in Physics, earned her undergraduate degree in Engineering Physics at McMaster. She pioneered the development of chirped pulse amplification, now vital to millions of corrective laser eye surgeries each year. She is a professor at the University of Waterloo.