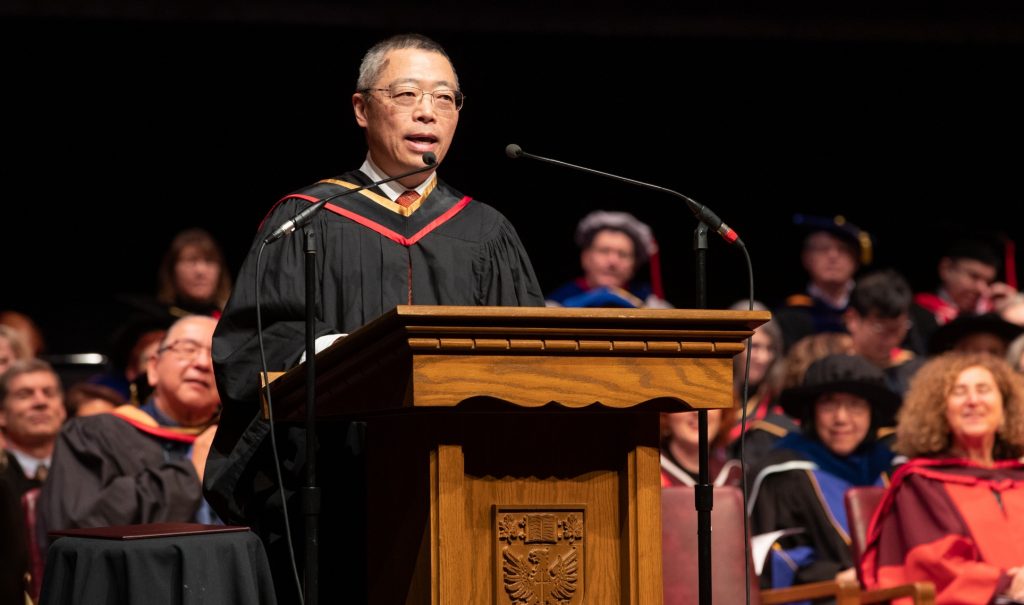 ArtSci 1984 grad Bruce Miyashita speaks at the Fall 2019 convocation, where he reeived a Distinguished Alumni Award

In 1981, a teenaged Bruce Miyashita was visiting universities with his mother, trying to figure out what to study next — and where.

“I wasn’t sure which faculty to look into — I liked both science and art,” Miyashita recalls. “I wanted a way to study a bit of everything.”

At McMaster, a chance conversation with a woman in the registrar’s office led them to the brand-new Arts and Science program, and Miyashita graduated in 1984 as part of ArtSci’s very first cohort.

“There was no history for it and no way to guess if it would succeed,” he says. “But it was a good decision, obviously.”

Today, after more than two decades of working as an improvement and change leader at multi-billion-dollar organizations, Miyashita runs a charitable foundation named after his parents.

Grounded in the same principles of flexibility and interdisciplinary thinking that drew him to ArtSci and that he championed through his career, the Tom and Nancy Miyashita Foundation helps young adults build practical skills to prepare for the work force.

“He obviously took his degree in Arts and Science and ran with it,” says Professor Emeritus Alan Mendelson, who taught Miyashita.

“He is a superb role model for students. He is an ethical and thoughtful person, and he is generous both with his resources and with his time.”

In 2017, Miyashita gave $350,000 to McMaster’s ArtSci program — which has grown by leaps and bounds since his undergrad days — to introduce students to the business world and connect business leaders with students who know how to communicate, collaborate and think creatively.

The Tom and Nancy Miyashita Arts and Science Program Enrichment Fund supports initiatives such as the New World of Work Forum.

Miyashita’s relationship with Mac and with ArtSci goes even deeper than the enrichment fund.

“Some of my most meaningful relationships and affiliations began when I was an undergrad at Mac,” he says. And now, as an alumnus, he takes every opportunity he can to get to know the students.

A year ago, Miyashita travelled 3,000 kilometres with three ArtSci students to Fogo, NL., to learn about the island’s unique economic model.

“I wanted to give these students something above and beyond what they’re getting in the classroom — and they got that,” Miyashita said. “But honestly, I think I learned way more from them than they did from me. We had a really great time travelling together.”

Getting to know the next generation of leaders is what makes it really enjoyable as an alumnus, he says. “I’m fortunate I have the time now to engage with students — it’s very gratifying.

“Tiny interactions that you may not give a second thought can add up and nudge someone in a direction they never thought about — like that one person at the registrar’s office in 1981 did for me.”

Any words of wisdom for the latest ArtSci cohort?

“Difficult as it may be, don’t put any more pressure on yourself to get everything perfect. It’s okay to ‘fail’ or change course. Life doesn’t unfold in a single linear, upward path.

“Don’t drive yourself crazy thinking about what could have been or comparing yourself to others.”

Bruce Miyashita is receiving a Distinguished Alumni Award at the fall 2019 convocation. The award honours graduates who have attained a national or global level of distinction and achievement through scholarship, research, teaching, creative contributions to the arts or sciences, or service to society.