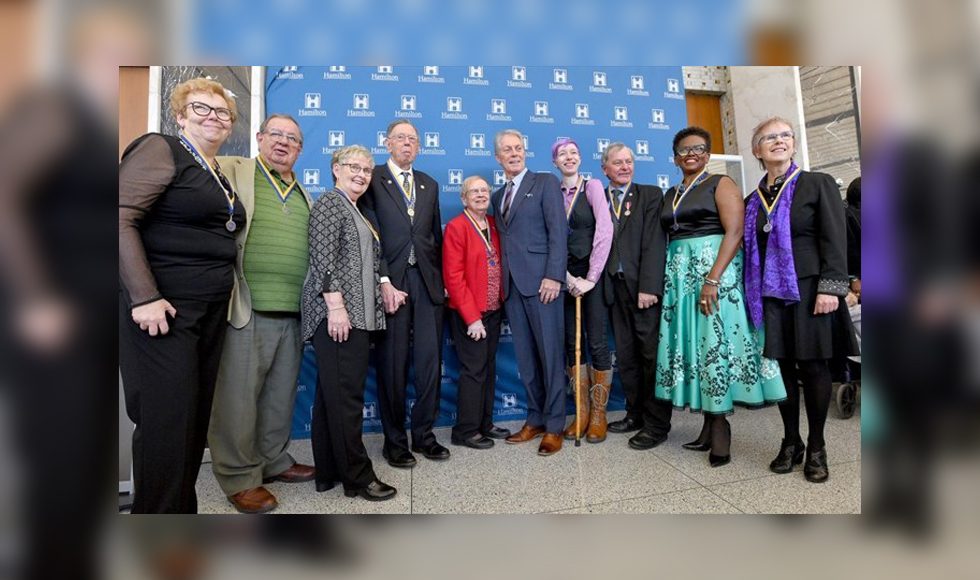 Kenneth Hall ’55 and ’60, Robin McKee ’80, Anne Pearson ’84 and ’93 have been recognized with the inaugural Order of Hamilton awards, announced during Mayor Fred Eisenberger’s New Year’s Levee on January 5.

The award recognizes 10 Hamiltonians who have made an exceptional impact on the city through volunteerism.

Hall, who has a long history with McMaster, taught with the Hamilton Board of Education for 31 years, helped develop the Cootes Paradise Fishway and form the Bay Area Restoration Council. He was a two-term president of the McMaster Alumni Association and in 2018 received an honorary degree, in addition to the Social Sciences degree he earned in 1955 and Bachelor of Physical Education in 1960.

McKee, who earned his undergraduate degree from the Faculty of Humanities, is a history buff who has been dedicated to preserving local cemeteries for more than 20 years and conducts free walking tours each Saturday at the Hamilton Cemetery.

Pearson’s Social Sciences doctoral and post-doctoral research at McMaster explored the topics of Hindu fasting rituals in India, and the transmission of religious practice and identity between first and second generation Hindu women in Ontario. She maintained a connection with the university through her teaching roles from 1987 to 2015 including seven years as a full time Assistant Professor. Pearson has done extensive volunteer work with various initiatives and organizations, often in a position of leadership and promoting interfaith education in Hamilton.

Ken Hall is also one of the newest recipients of the Sovereign’s Medal for Volunteers, an official Canadian honour that is administered by the Chancellery of Honours at Rideau Hall. A special award presentation was held on January 3 celebrating Hall’s achievements.

“Ken has done so much for so many organizations and anyone who has seen his work up close, whether that’s at McMaster, in the local environmental sector or in the broader community know that this recognition is very well deserved,” said Mary Williams, vice-president, University Advancement during the presentation.