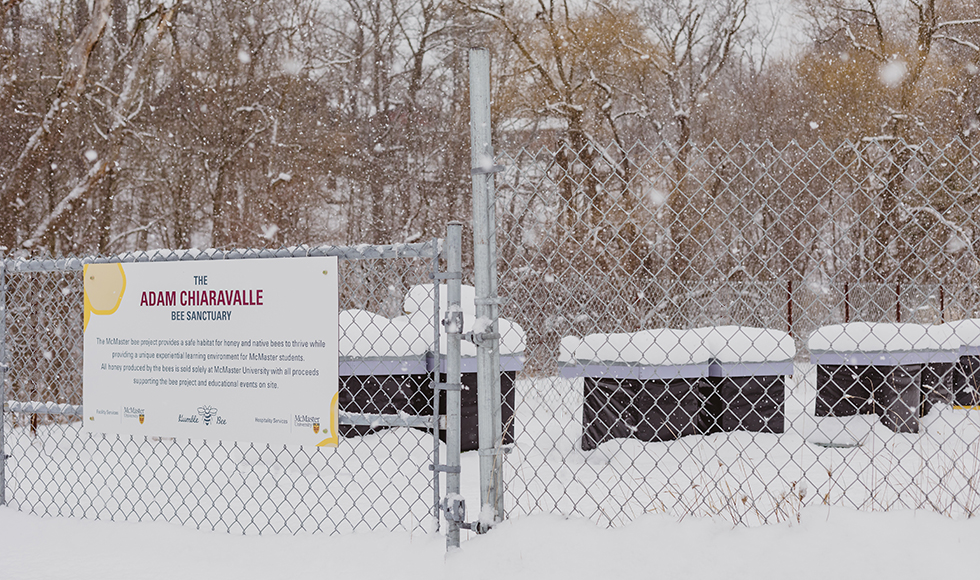 When Adam Chiaravalle discovered that a beekeeping project on campus had been forgotten, he decided to do something about it – and, true to form, he addressed an email to senior leadership saying, “Dear Mountain Movers”.

Sadly, Adam passed away last November – but his work to revive the project has been honoured with a sign in his memory.

“Adam and I frequently spoke about sustainability and food security, big passions for both of us, and he wanted to learn about how to bring more of it to campus,” says Chris Roberts, director of hospitality services. “He wanted the bee project to happen and so the sign is a tribute to Adam’s effort to keep it alive.”

The beekeeping project began in 2012, when social sciences graduate student Brandi MacDonald received funding for an educational project. But when MacDonald left Hamilton to pursue her career, the campus hives lay dormant.

“Everything about this project is McMaster,” says Roberts, who was included in Chiaravalle’s initial email.

With the help of Luc Peters of Humble Bee, the project took off. All the honey produced on campus is sold on campus with a McMaster label. The proceeds go towards the ongoing maintenance of the hives, which are located adjacent to parking Lot P.

When Chiaravalle passed away, Roberts knew the sign for the bee sanctuary needed to be dedicated to him.

“This project happened because someone drove it from day one. That was Adam.”

The university has received notification of a confirmed COVID-19 case on campus involving a staff member. The staff member tested positive on Jan. 27, and . . .