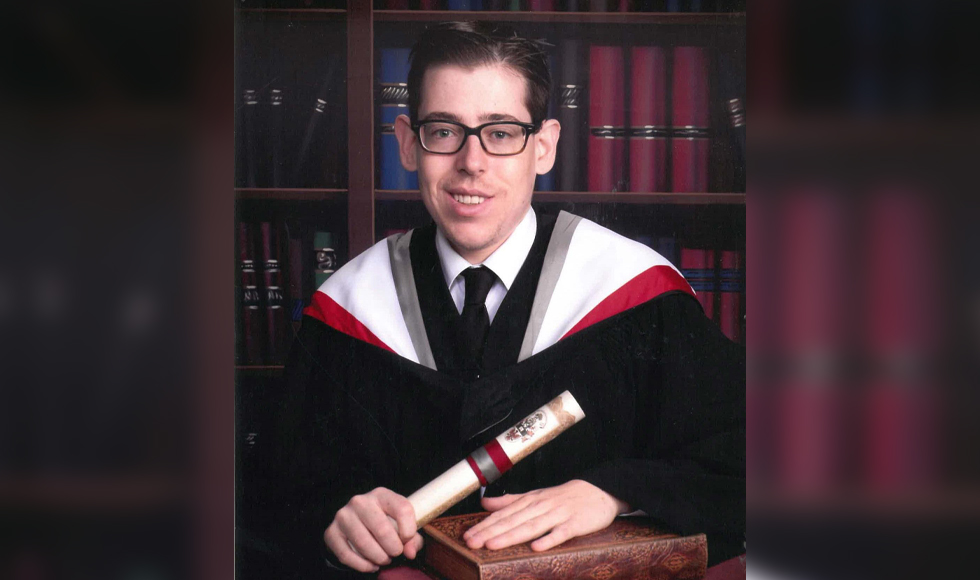 Adam Chiaravalle, a recent McMaster graduate, volunteer and colleague who left an indelible impression on the campus community and all who knew him, has died. The  political science major, who graduated in 2017 with a minor in sustainability, passed away peacefully at Toronto General Hospital on Friday, November 6, surrounded by his family. He was 26.

Those who met Adam unanimously remember him as  energetic, friendly and passionate about sustainability, the environment, local food and connecting like-minded members of the community. According to the many people who knew and worked with him,  he had an eagerness to inspire and teach everyone he met about how to make McMaster and Hamilton better and a more sustainable community.

“[Adam] has enough enthusiasm for all of us to do good works and to make change in the world,” said Patrick Deane, McMaster’s previous serving President and Vice Chancellor, at the 2017 graduation ceremony, where Adam graduated with academic distinction and received the President’s Award of Excellence in Student Leadership.

“Those who know Adam will know he’s very difficult to say no to.”

For his own part, Adam said yes to many, many things. During his time at McMaster Adam was integral to several sustainability initiatives, including the McMaster Community Garden and the  Stinson neighbourhood community garden in Hamilton. He served as the Education and Advocacy Co-ordinator for the Mac Farmstand and founded the local food discount program for students.

He also resurrected the “Food for Thought” cooking classes, which were held off-campus until he approached Karen McQuigge, director of Alumni Advancement, to help realize his dream of making the classes accessible on campus.

“Working collectively, with Taryn Aarssen from the Student Wellness Centre and our colleagues in Facility Services we were able to re-do part of the kitchen in Alumni House, the former President’s Residence, to make that dream possible,” said McQuigge.

“Adam’s infectious spirit and smile will never be forgotten. He was one special McMaster grad who loved everything about this place and its community of people.”

Friends and community members took to social media over the weekend to voice their memories of and connection with Adam.

“Anyone honoured enough to have met him was better off,” said Dave Heidebrecht, manager of McMaster’s Office of Community Engagement, on Twitter Saturday morning. “His infectious positivity will live on through the many people he touched with his actions and commitment to a sustainable planet.” A friend and former colleague of Adam’s started a GoFundMe campaign to raise funds towards planting a tree at McMaster in memory of Adam.

“I did not expect the campaign to take off the way it did, but that was an error in judgement. Of course it would. It’s Adam,” said the former colleague, who wishes to remain nameless.

“The idea of planting a tree for Adam just made sense considering his passions and it was something small that we could do to honour his life and contributions to the university.”

Within three hours the campaign raised the target amount of $750. As of November 10 the campaign has raised $10,000 and the numbers continue to climb. The campaign will remain active until November 20.

The university is considering the best way to honour him through the funds raised in the campaign.

Much the same way he viewed the environment, Adam left people better than he found them.

His other commitments included Rain Haven (Hamilton Future Builders), McMaster and the Bee, and the Young Greens Club. A testament to Adam’s selflessness was when he was awarded a $3,000 prize and chose to donate the funds back to his alma mater to support the Farm Stand.

“Adam was a tremendous presence in Facilities over these past years,” says Debbie Martin, AVP and chief facilities officer, who worked with Adam in conjunction with the Sustainability Office.

In a 2017 article published in Raise the Hammer, Adam himself talked about his approach to community-building and sustainability:

“When people come together to make change and stay together because they sincerely enjoy being with each other, rather than the transformation that they are working towards the most remarkable change had already occurred. People are meant to be together and engage with one another, as we are creatures of social interaction.

“Sadly, we have lost our way, as we have largely been disconnected from real face-to-face engagement and community participation. Instead, we have become hooked on the material world and superficial fictitious commodities. When we participate in change we unlock the greatest and meaningful social experiences.”

An online memorial book, which will be printed and given to Adam’s family, is accepting contributions until November 25.

Dr. Ronald Bayne was one of Canada's first geriatricians and a lifelong advocate for better care for older adults. Dr. Bayne died on Friday after deciding to take advantage of the opportunity for medical assistance in dying.

It's been 60 years since an elaborate plan involving near-military precision, support vehicles, a custom-made bed and a relay of 100 to 125 maroon-and-grey pushers beat the odds — and the Aggies from Guelph.