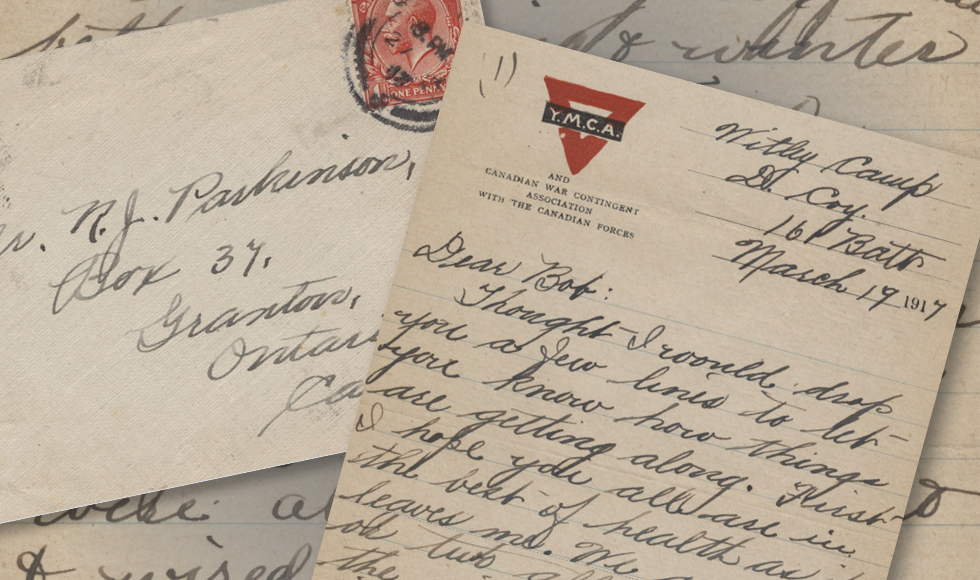 On March 19, 1917, Gordon William Parkinson, a private in the Canadian Expeditionary Forces, wrote home to his older brother Bob.

Nineteen-year-old Parkinson, who was stationed in England at the time, recounted stories of daily life in camp; the warming weather, the chores, the exploits of fellow servicemen. He also described a scene which, in light of the current pandemic, might feel oddly familiar to many Canadians.

“I guess I told you we were in quarantine with mumps now,” he wrote. “One of the fellows caught them and we were all put in a hut…with wire all around. We can’t go anywhere or get our pay, but we have to go on drill everyday just as hard as anyone. It sure is some system.”

Parkinson’s letter is among the many historical gems contained in McMaster’s Digital Archive, which provides access to the Library’s digitized special collections, including archives, maps and rare books.

Now, a transcription project begun during the lockdown has helped to make Parkinson’s letter, along with other important digitized materials from a number of the Library’s extensive archival collections, more easily accessible to researchers around the world.

Many of the documents transcribed are letters of soldiers writing home  during the first and second world wars, providing an important glimpse into the daily lives of everyday soldiers.

Read more about the transcription project on Brighter World From 1941 to 1945, Stuart Ivison, a Baptist minister and McMaster alumnus, served as a chaplain in the Princess Patricia’s Canadian Light Infantry. He documented his experiences in detail through often poignant letters, maps, photos and other materials – a unique archive which is part of the Library’s extensive World War Two collection.

Ivison, who survived the war, wrote home regularly to his wife Marjorie and their three sons, Don, David and Duncan. In the above letter, Ivison, as a diversion, is making plans for after the war. “Last night in my boredom, I amused myself by making a sketch of a proposed arrangement of the front yard – European style – that would be something like this,” he wrote.

Read: “I promised him I’d come back” This above image an excerpt of a letter written by Bernard Freeman Trotter, a McMaster Alumnus who, unable to secure a commission in the Canadian army due to ill health, was accepted instead into the British army in which he served as a second lieutenant. He made the crossing to France in December 1916 and was killed in action on May 7, 1917.

Trotter was a noted poet whose best-known work, A Canadian Twilight and Poems of War and Peace, was published after his death by McClelland & Stewart. Trotter’s letters from the front, however, often contained no poetry, focussing instead on ordinary details of life as a soldier, like in this letter, where he writes about the simple pleasure of having enough socks to wear.

Read: “Not vain your sacrifice”