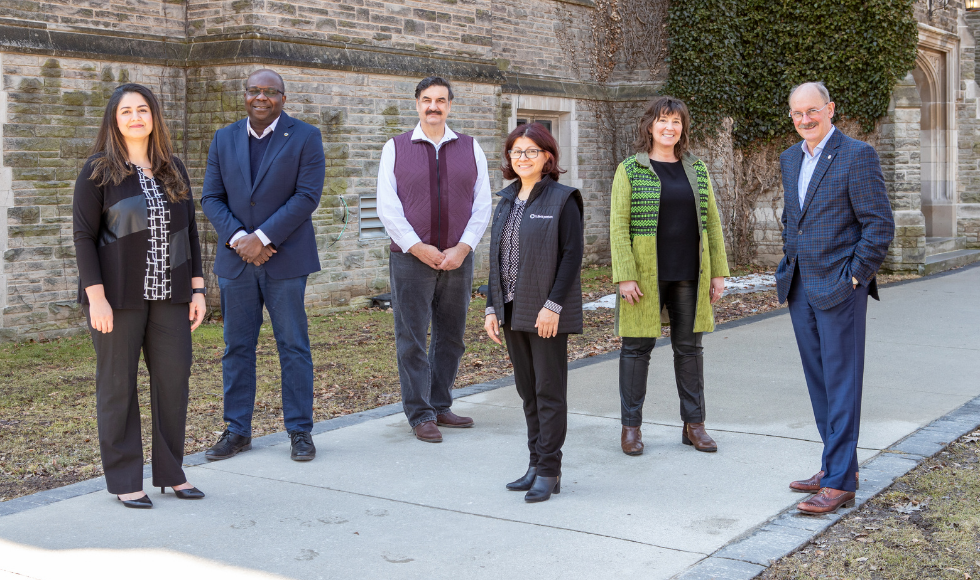 This landmark initiative was borne out of a community collaboration led by McMaster’s Committee on Students and Scholars in Crisis (CSSC). Pictured above are CSSC members, from left to right: Hila Taraky; Bonny Ibhawoh, director, Centre for Human Rights and Restorative Justice; Yar Taraky; Marufa Shinwari; Karen Balcom, Academic Director for Teaching and Learning, Office of Community Engagement; and Peter Mascher, vice-provost, International Affairs, and chair of the CSSC.

McMaster University’s six Faculties and the Office of the Provost have collectively pledged $800,000 to seed two new funds that will help students and scholars at risk around the world, including in Afghanistan and Ukraine, among other countries.

“These funds are a critical step in our response to the forcible displacement of students and scholars globally,” says provost and vice-president, Academic Susan Tighe. “This work also builds on McMaster’s commitment to increased access to education for all, and will complement the university’s existing global engagement programs.”

Of the total $800,000 pledged, $200,000 will be allocated to sponsoring and supporting forcibly displaced, including refugee, undergraduate and graduate students. The remaining $600,000 will support McMaster faculty, departments and research centres to employ scholars, researchers and lecturers at risk, remotely and locally.

To build on contributions from the Office of the Provost and McMaster Faculties, the university has launched a crowdfunding page so that members of the broader community can donate and support the cause.

This landmark initiative was borne out of a community collaboration led by McMaster’s Committee on Students and Scholars in Crisis (CSSC). Convened in October 2021, the committee is comprised of faculty, staff, students, alumni and community members—all with experience of being forcibly displaced from their homes.

Peter Mascher, vice-provost, International Affairs, and chair of the CSSC, says what started as a group conversation around specifically helping Afghan students and scholars in summer of 2021 became a much broader discussion about developing a funding proposal in support of all students and scholars at risk.

“We have seen time and again that conflict, war, and human rights abuses around the world have a detrimental impact on students and scholars, affecting their studies and, too often, their personal liberty and safety,” says Mascher. “This initiative is about addressing global humanitarian crises through the powerful mechanism of knowledge sharing and education.”

According the UN Refugee Agency, 82.4 million people around the world have been forcibly displaced due to conflict, persecution, human rights violations, and violence. When combined, Syria, Venezuela, Afghanistan, South Sudan and Myanmar account for two-thirds of people currently displaced across borders.

More recently, since Russia invaded Ukraine on February 24 of this year, 3.2 million refugees have fled the country.

Pamela Swett, dean of the Faculty of Humanities, stresses the importance of protecting those at risk during these crises and creating spaces for young learners and scholars alike to freely think, challenge and share ideas.

“Along with the other deans across McMaster’s Faculties, I look forward to building out supports and opportunities for global scholars and students who are at risk” says Swett. “The Faculty of Humanities is currently working to hire a female scholar in Afghanistan and will soon welcome a new writer-in-residence from Ukraine, now relocated in Poland. Their contributions will surely enrich research and learning spaces at McMaster.”

Read more: McMaster students share how you can help support the people of Ukraine

Beyond the two funds, McMaster continues its work with the World University Service Canada (WUSC) and Scholars At Risk (SAR), both organizations that seek to support the global higher education community.

Bonny Ibhawoh, director, Centre for Human Rights and Restorative Justice and CSSC member, says local chapters of these groups are coming together with a lot of determination to add to McMaster’s initial contributions.

“From student fundraisers to art auctions, there are so many campus events underway to support these two funds and to make a real change for students and scholars impacted by global crises,” says Ibhawoh. “It’s heartening to see the campus community join with wider efforts to help support students and scholars around the world.”