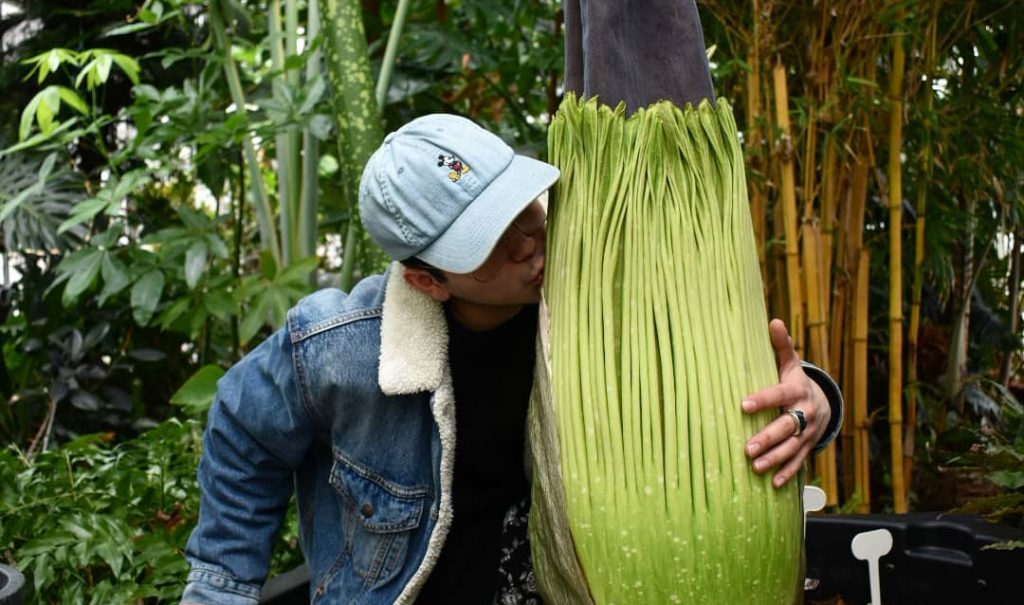 One of the McMaster Biology Greenhouse's volunteers shows Magnus a little affection.

One of McMaster’s three corpse flowers, Magnus, is set to bloom in the next day or so. (You can read the full story here.)

While we’re waiting for the big day, here are some fun facts about Amorphophallus titanum that you might not know.

Titans heat up to help spread the stink

Talk about hot to trot: when a titan arum blooms, its spadix – that tall part in the middle, which also holds the male and female flowers at its bottom – heats up to 36 degrees Celsius, or just below regular human body temperature. This helps its potent scent spread further, attracting more pollinating insects.

They invest a lot of energy in reproduction

The reason corpse flowers only bloom once every few years is because it takes a huge amount of energy to create those enormous structures. “Think of it as living really frugally for a few years, saving your pennies – then blowing it all on one huge vacation,” explains Susan Dudley, a plant biologist and a professor in McMaster’s biology department. “Once you’ve spent all your money and maxed out your credit cards, you need to save up again.”

For a corpse flower, that means sending up a single leaf from its corm – similar to a bulb or tuber – each year until it’s saved up enough energy to reproduce.

“We got ours from a dentist in New Hampshire who didn’t want to pay the heating bills on his greenhouse any longer,” laughs Dudley. “Obviously, they’re big plants, and they require a big greenhouse and tropical conditions to stay happy.”

The smell is strongest at night

When a titan arum blooms, the spathe – the leafy outer structure – gradually opens starting in the mid-afternoon and remains open all night, gradually closing up the next day. The smell gets stronger as the spathe opens, and is strongest in the middle of the night, when the flower’s pollinators would be most active.

Unlike carnivorous plants like the Venus flytrap, titan arum plants are pretty typical when it comes to their diet: they thrive on moisture, soil and sunlight. Insects are strictly pollinators — not food!

Thanks to support from the McMaster Okanagan Special Project Funding, McMaster employees can now tune into McMaster Class, a series of six online cooking classes, to learn the finer points of fine cooking from McMaster’s very own executive chef, Paul Hoag.