In photos: A celebration of a transformational $50M investment in Canada’s future leaders 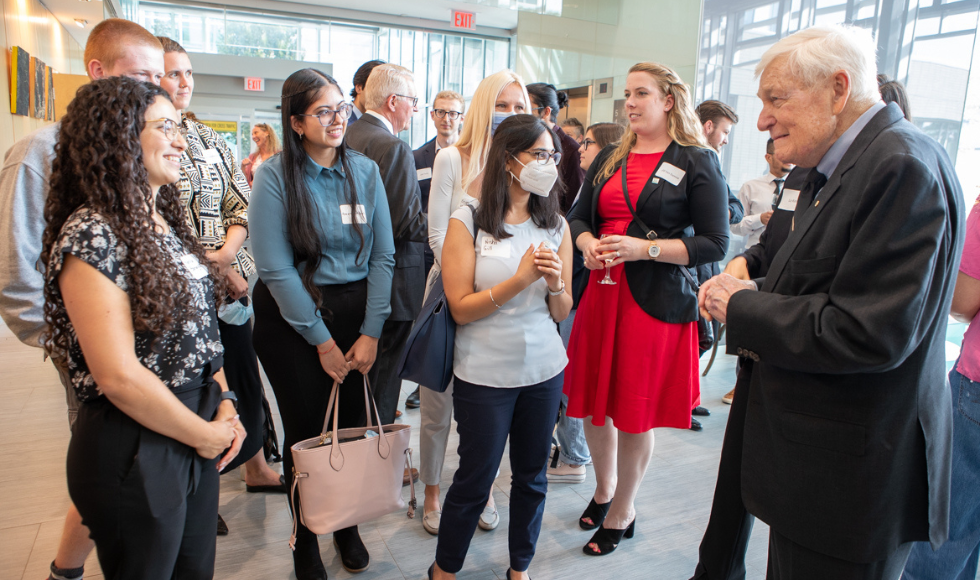 Lynton "Red" Wilson speaks to McMaster students during a celebration of his $50-million gift that will launch Canada’s most comprehensive leadership college. (All photos by Georgia Kirkos/McMaster University).

As L.R. “Red” Wilson looked out on the crowd gathered in the concert hall of L.R. Wilson Hall — a building bearing his own name — he thanked his wife, children and grandchildren for being there.

“It’s nice to see what the next generation beyond the one right next to us might look like, and how it’s going to unfold,” said the two-time McMaster University graduate and Chancellor Emeritus.

It was the Canadian businessman and philanthropist’s forward-looking vision and hope for the future that had brought the crowd together.

University leaders, prominent Canadians, student leaders and other supporters of the university attended a celebration on Tuesday of Wilson’s remarkable $50-million investment — the largest gift dedicated to liberal arts education in Canada — to establish a comprehensive leadership college at McMaster.

The Wilson College of Leadership and Civic Engagement, the only one of its kind in Canada, will develop outstanding young leaders who understand the myriad challenges facing our world and who will be committed to strengthening our societies.

“Now, at a time when we need more effective leaders than ever before, it’s time to push for a reinvention of the way we prepare our future leaders,” said Wilson, a long-time supporter of McMaster students.

“That’s why I wanted to be a part of this new College of Leadership and Civic Engagement here at my alma mater.”

Below are photo highlights of the celebration. Wilson’s wife Brenda, two of the couple’s three children and several of their grandchildren were on hand for the celebration of the transformational $50-million investment.

Wilson’s relationship with McMaster goes back six decades. The Canadian businessman graduated with an Honours Bachelor of Arts in Economics in 1962. Since then, he has been a stalwart supporter of the university. Wilson’s support, and that of the Wilson Foundation, is “a tremendous vote of confidence in McMaster and our ability to develop the kind of leaders Canada and the world need,” David Farrar, president of McMaster University, said in his remarks. “Thank you, Red.” “This is going to set McMaster apart. It’s going to attract even more incredible students to Mac. And, most importantly, it’s going to equip more and more Mac grads with the ability to lead and change the world to become a better place. This is a big moment for the university and for our future students,” said Singh. The McMaster University Concert Band, under the direction of Joseph Resendes, performed on the stage of the LR Wilson Concert Hall while a visual rendering of the future Wilson College of Leadership and Civic Engagement was slowly revealed on the screen behind the ensemble. In his reflections on the impact future graduates of the Wilson College of Leadership and Civic Engagement might have, Wilson said that while there’s no single kind of leader, one thing successful leaders have in common is their ability to anticipate and envision what the future might look like.

“In my 50 years in public and private sectors, I’ve observed the best leaders display personal integrity, resilience, broad vision, conviction, concern for others, passion, willingness to listen, openness to collaboration and an ability to communicate clearly, contextualize, compare and learn,” said Wilson. The philanthropist was gifted a sketch of the rendering of the future Wilson College of Leadership and Civic Engagement that was created by Emily Kester, a 2019 graduate from the Faculty of Humanities’ Studio Arts program.

Jeremiah Hurley, the dean of Social Sciences, and Pamela Swett, the dean of Humanities, presented Wilson with the gift. McMaster’s Wilson College programming will feature a unique curriculum nested between the two faculties. “This announcement almost makes me want to re-enroll in my first year,” said Simranjeet Singh, president of the McMaster Students Union (MSU). “It will create an amazing opportunity to develop and deliver the greatest masterclass in leadership that any student could hope to experience.” The programming of the Wilson College of Leadership and Civic Engagement will build on the philosophy and approaches used in the Wilson Leadership Scholar Award program. The initiative, launched by Chancellor Emeritus Wilson and the Wilson Foundation in 2016, recognizes and nurtures leadership potential in undergraduate and graduate students at McMaster University.

Many Wilson Leader alumni, including Christopher Schankula (pictured here) were on hand for the celebration. “It’s so nice to hear a message of hope and positivity,” said Carol Markos as she reflected on Wilson’s remarks to the crowd. Fellow Wilson Leader alum Monish Ahluwalia agreed. “It’s always so great to hear Red speak.” The Wilson Leadership Scholar Award program has grown since it was launched in 2016. The program first recruited three students per year and now includes 10 students annually.

This year is an exception, however, with 11 students awarded. Amandeep Saini, pictured here speaking with Red, is among that cohort. “Canada needs leaders who care about the future and who are able and willing to shape it more positively, and devote themselves to creating true progress, stability, prosperity, safety, fairness and justice,” said Wilson.

“This is important work. I’m proud to be part of it, and proud to support McMaster in this endeavour.”

Read more about L.R. Wilson’s extraordinary gift and the establishment of the Wilson College of Leadership and Civic Engagement here.