What to do with your food waste? Two McMaster students have an answer for you 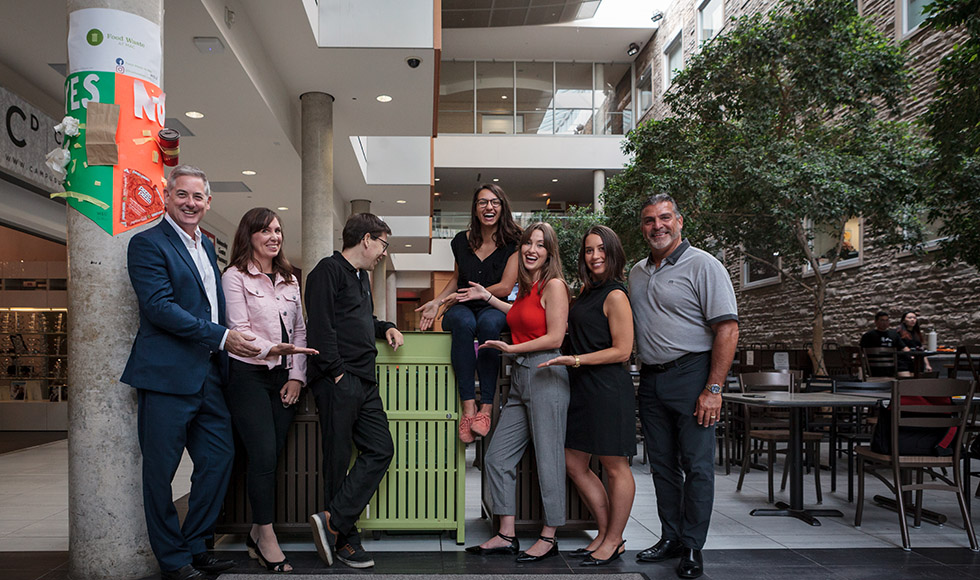 Imagine working on a great class project that helps the environment – and then winning a $5,000 award for your work. That’s what happened to Alicia Giannetti and Amber van Druten.

Last fall, they enrolled in SUSTAIN 3S03 Implementing Sustainable Change, a third-year undergraduate course open to students across all Faculties at McMaster. Sixty per cent of the course grade is an experiential project. Separately, Giannetti and van Druten chose “food waste” from among the broad topics offered, so they were paired as a team.

When they sat down to brainstorm where to focus their project, Amber noticed Alicia carefully repacking her banana peel and apple core to take home. When Alicia explained there was no place to compost that waste, their idea was born.

For three months, the two students conducted extensive research – including experimenting with signage and even sitting by their compost bin to see if it was being used. They collaborated with staff members across campus and ultimately succeeded in getting a permanent, public-facing compost bin set up.

That would have been reason enough to celebrate. But in June, Giannetti and van Druten learned they were the inaugural recipients of the Climate Change and Health – Innovation Award, which comes with a $5,000 prize for the winning team to share among themselves.

Established in 2017 by two graduates of the Michael G. DeGroote School of Medicine and their family, the new award was created for students enrolled for credit in any of the four SUSTAIN courses (1S03, 2S03, 3S03, and 4S06) offered through the Academic Sustainability Programs office.

The donors, who wish to remain anonymous, set up the award to encourage students to study climate change, examine how it has a significant impact on human health – and come up with innovative solutions.

Giannetti has just graduated from McMaster with a double honours degree in sociology and religious studies, and a minor in sustainability. “Honestly, we are so shocked that we are the recipients of the award,” she says. Her career goal is to “help change human habits” through work that supports the environment and promotes sustainability.

Van Druten was an exchange student at Mac in 2017-18. She writes from the Netherlands, where she has returned to complete her studies in neuroscience at the University of Amsterdam: “I was also so surprised that our project won. We put a lot of effort into this project and it is amazing to see how a collaboration among partners could ensure that there’s now a permanent compost bin in the student centre.”

Giannetti and van Druten are quick to thank the donors who made the award possible, as well as their many campus collaborators from McMaster, MUSC, and the McMaster Students Union (MSU).

The project has helped to kickstart a wider campus effort with new compost bins planned for select buildings across campus. A campus education campaign is in the works.

Kate Whalen is senior manager of the Academic Sustainability Programs (ASP) office. She notes that both Fiona McGill and Adam Chiavarelle were students in previous ASP courses. “It’s inspiring to know that previous students are not only applying what they’ve learned beyond their courses, they are also mentoring and supporting current students.”

She describes SUSTAIN 3S03 as a living laboratory in which great things can happen. “We want to inspire students to realize that their education extends well beyond the classroom.”