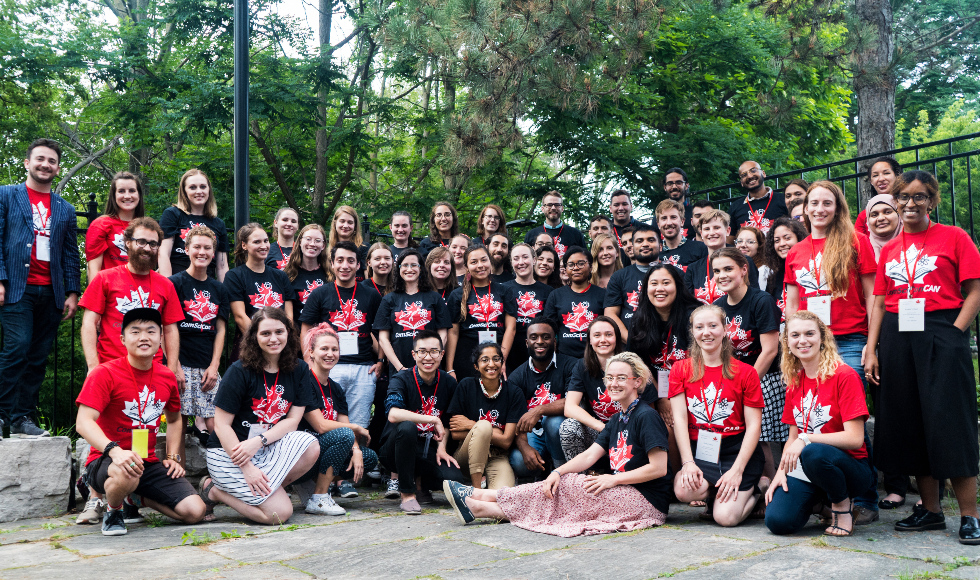 The participants and organizers of ComSciConCAN 2019. Photo by Zachary Guy.

For a lot of people, “She blinded me with science” isn’t just a song from the ‘80s – it’s reality. Science can be…well, complicated to explain.

ComSciConCAN is trying to change that.

The first-ever Canadian offshoot of ComSciCon – short for Communicating Science Conference – was held at McMaster earlier this month, welcoming 50 attendees selected from 400 applicants from across the country. Supported by a variety of organizations and institutions, including  McMaster’s Socrates Project and the faculties of Science and Health Sciences, the event’s workshops, panel discussions and keynote talks focused on teaching scientists to share the results of their research to a broad, diverse audience – not just fellow researchers.

Here are some of the participants’ reactions.

“Science is a human endeavour like any other and is only important so long as people care about it.

“Having the ability to not just do science but also communicate it effectively in an accurate yet engaging way to non-scientific audiences like the general public or political stakeholders is an increasingly needed skill in today’s world.

[At ComSciConCAN], the energy is high and everyone is incredibly encouraging of each other. Besides inspiration and practical tips for doing science communication, we are building a community of young, excited and hungry graduate students who are eager to lead Canadian science into a new era where science is not just contained in the ivory tower, but accessible and interesting for all Canadians.”

“We live in an era where, on the one hand, our everyday life is dominated by science-based technology and yet, on the other hand, fake news exists. A significant portion of the population does not trust science and the people behind it. In my opinion, it is our duty as young researchers to close the gap between scientists and the public by making science more accessible.

Organizing an event like ComSciConCAN is a great challenge. We started working exactly a year ago, and we went through a lot to be here today. We are grateful to all our generous sponsors that made this event possible and to all the wonderful attendees and science communication experts that joined the conference.

I was amazed by the level of enthusiasm and engagement everyone showed during ComSciConCAN.

“Forming a strong graduate student science communication community is very important for the future of science research in Canada, and ComSciConCAN shows beyond any doubt that it is a bright future!”

“ComSciCon was originally founded by a group of graduate students originally part of an initiative called Astrobites. Astrobites is a student-led blog that summarized complicated astrophysics journal papers into digestible summaries for undergraduate students. They quickly realized after many other students from different subject areas wanted to start their own versions of the blog (including Chembites, Envirobites, Oceanbites, and many more) they should have a meeting to bring these students together over their common interest in science communication. With six years of ComSciCon happening all over the US, Canadian graduate students applied to attend, and when they met in Boston they realized the need to organize the first Canadian workshop. Most importantly, it is fully funded, which makes this workshop available to all students and not dependent on other funding.

“Thank you to all our sponsors and McMaster University for making this inaugural event possible. It has launched an astounding effort for the accessibility of science through inspiring the next generation of science communicators.

“The vast majority of scientific research is funded by taxpayers through agencies like NSERC and CIHR. Just like any other funder, we have an obligation to let the Canadian public know how their money is spent, and why it is worthwhile. The biggest benefit [of ComSciConCAN] for me was finding a network. I’m a science writer, so I rarely meet other science communicators in real life. Now I have 50+ enthusiastic, Canadian and talented people in my network.”

“In an era of global climate change, the plastics crisis and an anthropogenic extinction event, the public perception of scientific concepts, findings and scientists has never been more important. For governments and other decision makers to be pressured to develop responsible and sustainable policies, scientists have a responsibility to effectively and accurately communicate to a broad public of non-experts.

For as long as scientists have warned of challenges such as those mentioned above, lobbyists and allied corners of the media have restricted those warnings from gaining political traction by creating a distrust of the scientific process and its results.

“As such, it’s vital that scientists work creatively to become more transparent to the public, demystifying their science and gaining trust through improving accessibility. This is the shared goal of those of us who attended ComSciConCAN 2019.”