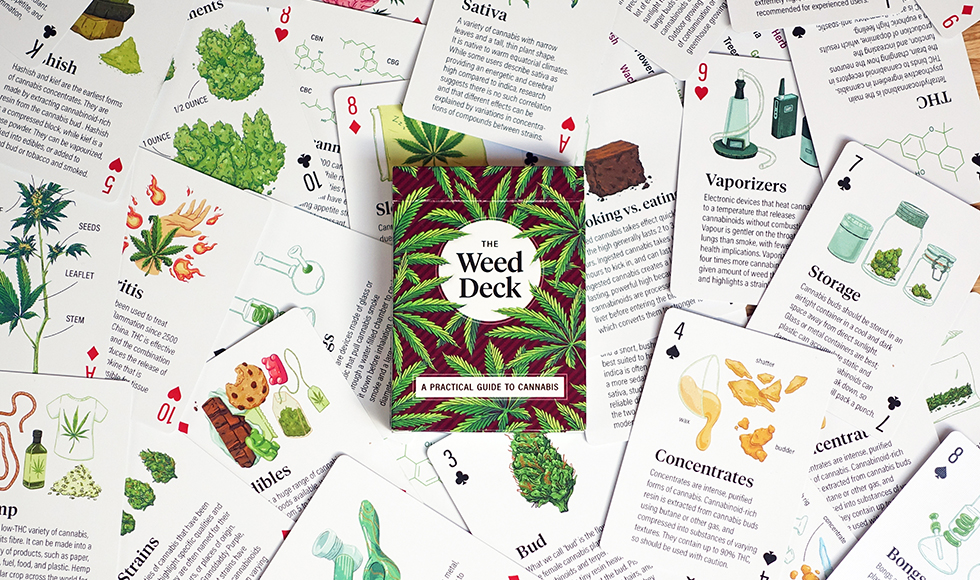 With cannabis set to become legal across Canada this week, government agencies have spent a lot of time, energy and resources educating Canadians on the legal parameters surrounding the soon-to-be-legal drug.

However, so much focus on the rules and regulations has resulted in little attention being paid to the process of educating Canadians about cannabis itself.

Barrett-Forrest has developed a deck of playing cards — “the Weed Deck” — designed to teach both new and experienced users the essentials of cannabis.

Each card in the deck carries information — definitions, factoids, terminology, health effects — and features a unique illustration to help people visualize what it is they’re learning about.

“I truly believe that this product contains the most accurate set of cannabis-related information based on the information that exists in the world right now,” Barrett-Forrest says. “I’m certain new information will become available in the years following its legalization, but, for now, The Weed Deck is comprehensive.”

The biggest challenge Barrett-Forrest faced during production was deciding what would be included in The Weed Deck and what wouldn’t.

“There is so much information out there,” he says. “The problem is, a lot of it is really, really dense. There are great, informative books, but they are generally very thick, difficult to consume, and honestly rather expensive. I think a lot of them go unread.”

Barrett-Forrest read through as many of them as he could, keeping notes. He finished his intensive research process with a list of well over 100 relevant topics, but had to whittle it down to just 56 to fit the context of a deck of cards.

Barrett-Forrest says being able to distill information to its purest, most concise form is a skill he learned as a McMaster undergrad. In fact, he says condensing hard-to-understand information into short, digestible descriptions in his first-year Arts & Science writing class is one of the most important things that he was ever taught as a student.

“I’ve really built my whole career on that one skill,” says Barrett-Forrest, who graduated in 2014 with a combined honours degree in Arts & Science and Multimedia.

The Weed Deck is Barrett-Forrest’s third deck of educational playing cards. The Design Deck and The Font Deck have already combined for over 10,000 decks sold to people in over 90 countries. In addition, both are currently used as curriculum aids in several colleges and universities around the world — something Barrett-Forrest thinks might soon happen to the Weed Deck, too.

The Weed deck was fully funded through crowdsourcing.  Barrett-Forrest has nearly 250 backers on Kickstarter, who pledged a total of $9,000 in funding — $4,000 more than the goal he set for the project.

“At the end of the day, this deck of cards is designed to be educational,” he says. “It provides accurate information in a fun and digestible way.”