Want a better understanding of your favourite song? Move to the beat 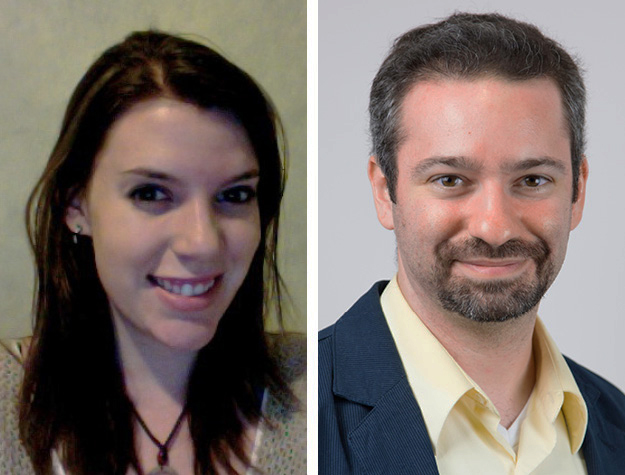 Kick out the jams. McMaster researchers Fiona Manning and Michael Schutz have found that tapping, nodding or dancing to the beat can help us grasp the structure of a song.

We do it in the office, in the car and in that trendy Cuban café when our friends aren’t looking. When the music is good, the urge to move is irresistible.

While we don’t fully understand why music compels movement, a pair of researchers working in McMaster’s MAPLE Lab (Music, Acoustics, Perception & LEarning) have found that it can improve our sense of timing and result in a better understanding of a song’s structure — even for those with little or no musical training.

“When you’re on the bus or walking to work or school, anyone wearing an iPod is usually nodding or tapping along,” said Michael Schutz, an assistant professor who specializes in music cognition and percussion. “That movement is not only enjoyable, it actually helps us grasp music’s structure. Amazingly, we don’t need to be taught to move to music — children do this implicitly from a young age.”

Schutz conducted the research alongside Fiona Manning, a graduate Student in the McMaster Institute for Music & The Mind with an interest in exploring music, movement and perception.

As part of the study, 48 undergraduate participants donned a set of headphones and listened to a sequence of woodblock tones. Some had no musical experience, while others had up to 12 years of musical training.

Participants were asked to tap along with the beat during one round of trials, and sit perfectly still during another. Towards the end of the musical sequence, listeners heard a few seconds of silence before the final note. At the conclusion of the trial, listeners were asked to identify whether the final tone was early, late or right on time.

Moving to the beat helped listeners recognize when the final tone was off — especially when it was late. During subsequent testing, the team demonstrated that movement was most critical during the silence, in terms of maintaining the beat. They found this improvement did not depend on musical training.

Testing was done using a basic 4/4 time signature; a popular choice among pop songwriters due to the relative simplicity and repetitive nature of the pattern. The 4/4 pattern is easy for fans to move along to, which can help their understanding and enjoyment of the music.

“A solid beat is often a key element in hit songs, and it helps listeners move along. If you examine the Billboard ‘Hot 100’ list, many of those songs have a relatively simple beat,” said Schutz. “Music producers and songwriters recognize the pulse’s importance to listeners, who frequently ‘tap along’ or move when hearing their favorite music.”

Now we know that dancing doesn’t just help us enjoy music — it actually helps us hear it better.

The team’s findings will be published in the next issue of Psychonomic Bulletin & Review, a renowned experimental psychology journal.

Want to try the test for yourself? Here’s a sample clip of the woodblock sequence used by Schutz and Manning. Sit perfectly still and try to identify if the final tone is early, late or right on time. Play the clip again, but this time tap along to the beat. The timing of the final tone should be much easier to identify while tapping along.