‘Universal flu vaccine’ may be closer than we think, says Mac researcher 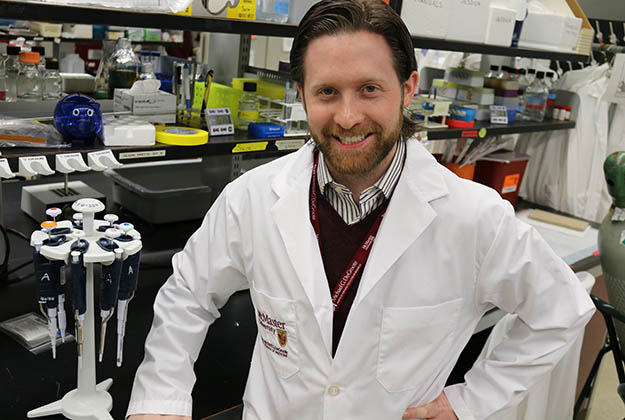 Assistant professor Matthew Miller, who is also a member of both the McMaster Immunology Research Centre and the Michael G. DeGroote Institute for Infectious Diseases Research, said he is optimistic that a universal flu vaccine could become a reality within the next five to seven years.

The fact that this year’s flu shot is not a good match against this year’s influenza strain is well known, and has happened before.

But now researchers at McMaster and the Icahn School of Medicine at Mount Sinai, New York say that a universal flu vaccine may be on the horizon, thanks to the recent discovery of a new class of antibodies that are capable of neutralizing a wide range of influenza A viruses.

“Unlike seasonal vaccines, which must be given annually, this type of vaccine would only be given once, and would have the ability to protect against all strains of flu, even when the virus mutates,” said Matthew Miller, an assistant professor in McMaster’s Department of Biochemistry and Biomedical Sciences at the Michael G. DeGroote School of Medicine. “This would prevent the occurrence of flu pandemics and poor vaccine efficiency in the case of mismatches, which actually occurred this year.”

In the study, published Wednesday in the Journal of Virology, senior author Miller and his colleagues show that when comparing the potency of an isolated strain-specific flu antibody (the type that current vaccines generate) with an isolated broadly-neutralizing flu antibody (the type generated by universal vaccines) in a lab setting, the latter have much weaker neutralization activity than the strain-specific antibodies.

While this sounds worrisome, they also found that when they isolated these antibodies in their natural (polyclonal) setting from human blood, their potencies were comparable, with the broadly-neutralizing antibodies have the added benefit of being able to neutralize many strains of virus.

While much has been learned to date about the biology of broadly-neutralizing antibodies, these new findings provide the first detailed analyses of their biological activity in natural contexts.

The research team also showed that the subtype of antibodies that are present in the lungs and upper respiratory system are particularly potent in neutralizing flu.

“This is also very encouraging and provides guidance as to what vaccine would be best for delivering a universal flu vaccine – that is, inactivated versus live-attenuated,” added Miller.

The inactivated vaccine (or “flu shot,” as it is commonly known) consists of virus particles which are grown in eggs under controlled conditions and are then killed using a detergent-based method.

The attenuated vaccine, on the other hand, was created by reducing the virulence of the pathogen, but still keeping it viable or “live.” The attenuation allows the virus to replicate harmlessly in the upper respiratory tract so that an immune response can be generated, but renders it useless at infecting the lung where disease normally occurs.

Miller, who is also a member of both the McMaster Immunology Research Centre and the Michael G. DeGroote Institute for Infectious Diseases Research, said he is optimistic that a universal flu vaccine could become a reality within the next five to seven years.