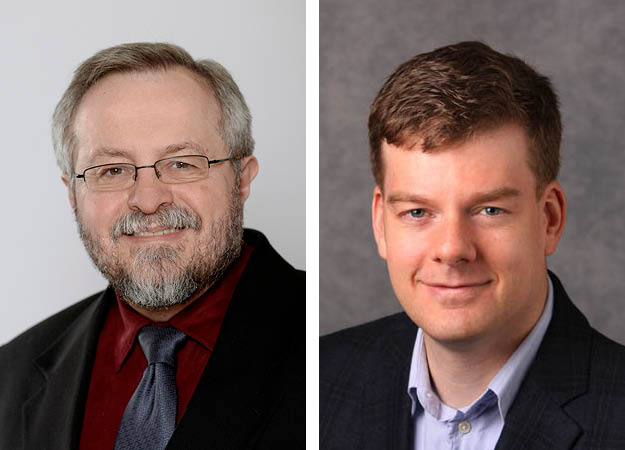 Associate professor Willi Wiesner (left) and Greg Sears, a former PhD candidates at the DeGroote School of Business, have found that the use of video conferencing for job interviews can put both interviewer and interviewee in a negative light.

Job applicants interviewed through video conferencing come across as less likeable, according to a new study from McMaster’s DeGroote School of Business.

The study — conducted by Greg Sears and Haiyan Zhang when they were PhD students at DeGroote, and co-authored by associate professor Willi Wiesner — shows that using video conferencing for job interviews disadvantages both employers and candidates.

“Increasingly, video technology is being used in employment interviewing because companies feel it provides convenience and cost savings. Despite their growing use, our study shows that video conference interviews are not equivalent to face-to-face interviews,” explains Sears, now an associate professor at the Sprott School of Business.

With use of video conferencing growing — in recent surveys up to 65 per cent of employers have reported using the technology — the DeGroote study raises concerns about widespread use of video in recruitment.

In simulated job interviews, candidates who were interviewed by video were rated lower by interviewers and were less likely to be recommended for hiring. On the other side of the webcam, candidates also rated their interviewers as less attractive, personable, trustworthy and competent.

Accurate assessments of candidates and positive evaluations of interviewers are essential as organizations compete for talent. Candidates who evaluate their interviewers more positively are more likely to accept a job offer.

The researchers recommend that video conferencing be used only for preliminary screening interviews. Final selection of candidates should be conducted through face-to-face interviews.

The findings were published in the journal Management Decision.