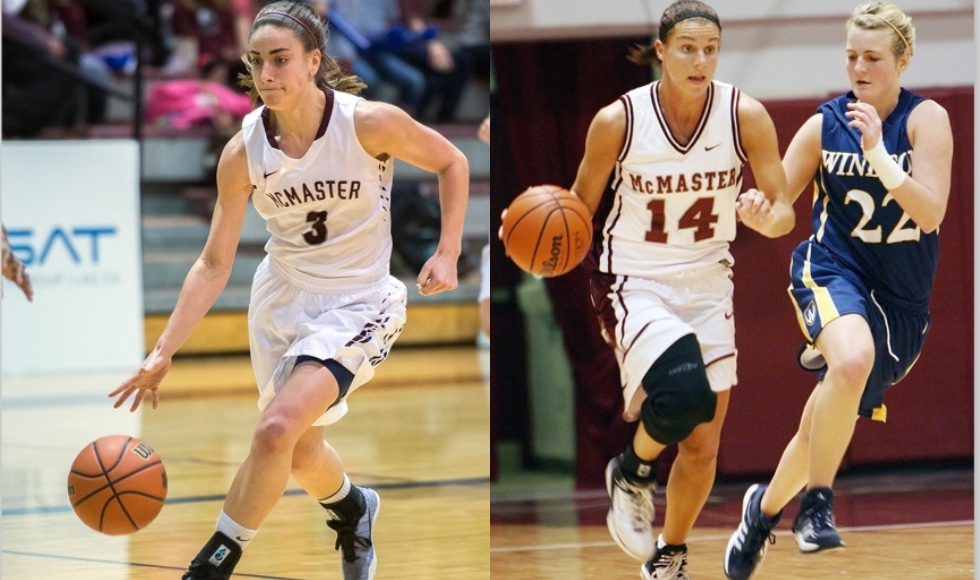 Danielle Boiago (left) and Lindsay Sutherland (DeGroot) have both been named to U SPORTS' list of the top 100 women university basketball players of the century.

BY Muad Issa, Athletics and Recreation

Lindsay Sutherland (DeGroot) and Danielle Boiago were both named players of the century by a committee of U SPORTS women’s basketball coaches and partners. The list marks the 100th anniversary of the first Canadian university women’s contest between the Queen’s Gaels and McGill Martlets on Feb. 6, 1920.

“Selecting a group of individuals to represent excellence in your conference or league is always a difficult task,” said Ryan Thorne, president of the U SPORTS women’s basketball coaches’ association and head coach of the Martlets. “This experience has shown me that there have been some amazing young women, who have represented our institutions well through basketball that have gone on to become remarkable women in life.”

DeGroot and Boiago fit the bill in more ways than one, ending their Marauder careers as two of the best to ever don the Maroon.

DeGroot gave McMaster four stellar seasons from 2005-2010, highly noted as the undisputed leader of one of the best groups to compete in Burridge Gym. She guided the Marauders to a pair of OUA titles in 2006, and 2008, and went on to be named both an OUA West first-team all-star, and OUA West Player of the Year in 2007 and 2008, as well as a CIS First-Team All-Canadian.

For her efforts in both seasons, she received the Therese Quigley Award as McMaster’s Female Athlete of the Year. DeGroot capped her four-year tenure with the Marauders by helping the team secure a bronze medal at the CIS Championship tournament, matching McMaster’s best-ever finish at the national championship prior to 2019’s breakthrough title run.

Boiago, who competed from 2012-2017, is the most decorated women’s basketball player to have represented the Maroon.

“I am truly at a loss for words – to be in the same conversation as one of Canada’s all-time greats is an extraordinary honour,” said Boiago. “It is so crucial that we recognize and thank the trailblazers that helped to develop the women’s game in Canada. Without them, many of us wouldn’t have had the opportunity to compete at an elite level here at home.”

Signaling her potential in her rookie season, winning the OUA West Rookie of the Year Award in 2013 and being named to the U SPORTS All-Rookie Team in the process, Boiago was an OUA all-star in each of her four subsequent seasons, reaching the Second Team in 2014, and cracking the First Team for three consecutive years.

Boiago averaged 25.5 points per 40 minutes – the highest total in the OUA that season – while her totals of 81 assists and 51 three-pointers ranked third in the conference. Her fantastic season totals that year, and competitive play, earned her the Nan Copp U SPORTS Player of the Year award, making her the first and only Marauder to receive the top individual
award.

She completed her regular season career as McMaster’s all-time leading scorer, with a total of 1,719 points that ranks third in OUA history. She also topped the record book with 250 steals, and finished second in assists (297) and third in rebounds (603).

After a season of professional basketball in Europe, Boiago returned to the Marauders, this time on the sidelines as an assistant coach working under her mentor, head coach Theresa Burns. In her first season on the bench, the Marauders went on a dream run not only capturing their first OUA banner in 11 seasons, but also went on to win the U SPORTS championships – the first,
and only, in program history.

“It is hard to put into words how much the McMaster community means to me. When I look back at my time at McMaster I can’t help but feel incredibly thankful for all the people who have played a part in my development. This basketball program will always hold a special place in my heart.”

Shawn Burt is McMaster’s next Director of Athletics and Recreation

Shawn Burt, a respected leader in sport in Canada, is McMaster’s next Director of Athletics and Recreation. Burt joins McMaster July 22 after recently serving . . .