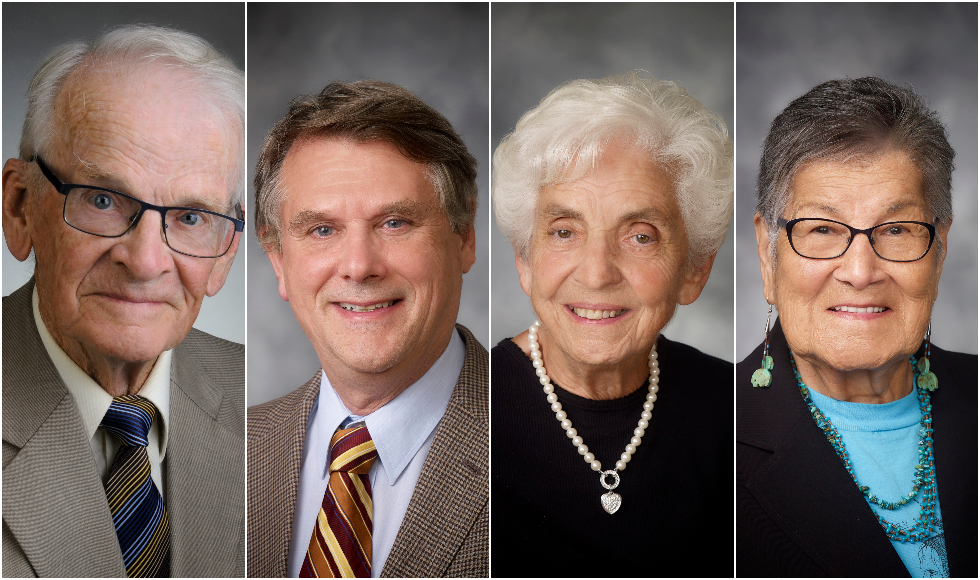 A McMaster Indigenous elder and three graduates are among six outstanding citizens to be named to the Hamilton Gallery of Distinction this year.

The 2019 inductees include leaders in medicine, education, theatre, environmentalism, community improvement, mentorship and civic engagement. Each has made a lasting contribution to Hamilton.

They will be inducted at the 36th annual gala dinner Tuesday, Nov. 12 at LiUNA Station.

The inductees with McMaster connections are:

Gord Carruth (’56, ’62)  has earned distinction as an educator and as a respected theatrical director, writer and composer. A McMaster graduate, Carruth served for more than three decades as a teacher, vice-principal and principal at secondary schools throughout the city, including his beloved Delta, from which he graduated in 1952. Carruth also coached football and directed high school theatrical productions. His advocacy for young people’s engagement in theatre led to his appointment as a founding member of the Hamilton Place board of directors, where he soon became chair.

Carruth earned public recognition as co-author of I Am Not a Legend, the show about legendary Green Bay Packers coach Vince Lombardi, which was performed in numerous theatres and ultimately produced for television by ESPN. He has written nine major Canadian musicals that have reached audiences across Canada and internationally. Carruth’s writing earned him an ACTRA award of excellence in 1985. He is the founder of Maple Leaf Theatre Productions, a non-profit organization dedicated to growing Canadian theatre by producing, publishing and making Canadian dramatic and musical productions available to professional and amateur theatre groups.

Dr. Gordon Guyatt (’77, ’83), O.C., has been critically important to establishing McMaster University and Hamilton as the birthplace of evidence-based medicine, which the British Medical Journal ranked as one of the most influential and important advancements in modern medical history.

A celebrated physician, researcher, McMaster professor, mentor and advocate, Guyatt’s achievements include the publication of more than 1,200 peer-reviewed articles, which have been cited more than 130,000 times, making him the 14th most cited scientist in the world.

Guyatt’s teaching, research and advocacy for high-quality universal health care have improved medicine and medical education around the world, and earned him numerous national honours, including the Order of Canada and a place in the Canadian Medical Hall of Fame. He is a member of the McMaster Alumni Gallery.

She continues to play an active role with local history and heritage groups including the Women’s Canadian Club, Friends of Auchmar, the Hamilton-Wentworth Heritage Association and the Binbrook Women’s Institute to name but four.

Now a member of the City of Hamilton Historical Board, she has also served with several other heritage and history groups. A social worker with the Hamilton Psychiatric Hospital, Saunders helped establish the East End Mental Health Clinic, now part of St. Joseph’s Urgent Care Centre on King Street East. She is the recipient of the McMaster Alumni Community Impact award.

An Indigenous leader in education and the culinary arts alike, Bertha Skye is respected as a supportive, sharing person who makes a significant difference in the lives she touches.

Skye was born in northern Saskatchewan where she began to hone her passion for traditional cooking.  At the age of 17 she began her culinary career as a cook for the Prince Albert Residential School.  At the 1992 World Culinary Olympics, Skye competed on a team of Indigenous chefs that won 11 medals, the most of any team, including the Grand Gold Medal.

She moved to Six Nations of the Grand River more than 60 years ago, after marrying her husband Hubert Skye. For most of the last decade Skye has served as an elder at Mohawk College, McMaster University and Sheridan College, helping Indigenous students navigate their way to success, often through significant challenges.

Siobhan Deshauer, a recent McMaster graduate and rheumatologist, uses her YouTube channel to give viewers an inside look at the health-care system and to demystify medicine for the masses.

A return of an alumni campus tradition

After a two-year absence, McMaster welcomed back alumni celebrating milestone anniversaries of their graduation in June.