“There has to be truth before there can be reconciliation” 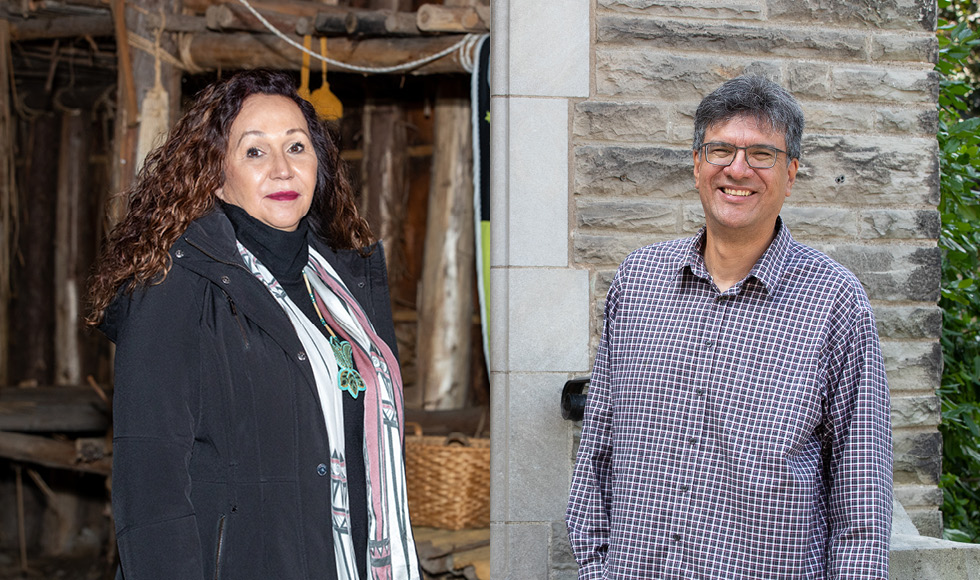 Dawn Martin-Hill, a cultural anthropologist who is Mohawk, Wolf Clan, is one of the founders of the Indigenous Studies program at McMaster. Among many other projects, she is currently working with a large multi-disciplinary team to improve access to clean water and increase capacity in water monitoring both in her community of Six Nations of the Grand River and for the Lubicon Lake Cree Nation in Alberta.

Rick Monture is Mohawk, Turtle Clan, and is an associate professor in the department of English and Cultural Studies and the Indigenous Studies program. He is the recipient of McMaster’s 2021 Indigenous Scholar-in-Community fellowship.

Earlier this week, they jointly delivered the annual Mahatma Gandhi Lecture on Nonviolence, which is coordinated and hosted by McMaster’s Centre for Peace Studies. Here, they reflect on the topic of their talk: the Haudenosaunee Great Law of Peace.

The Peacemaker brought the Great Law of Peace to end fighting among the original five nations of the Haudenosaunee Confederacy. What were some of the lessons it taught?

RM: The Great Law recognizes that people’s minds can be affected by suspicion, separation and fear – our ancestors knew this too, and tried to model a way of thinking about being, understanding that humans are frail and prone to make mistakes. When we do make mistakes, though, it’s up to the rest of the people who have clear thinking to take over and lead the way.

In its essence, the Great Law calls on us to help one another, realize that we’re all imperfect, and that we will all make mistakes in our words, and our actions, and our behaviour. In those moments, others need to lift us up.

A lot of the symbology around the Great Law is taken from the natural world. There’s a grounding of our behaviour on that land and from that land – not to take from it, desecrate or damage it, but learn from it.

The Peacemaker wanted to talk to the worst people – not using violence to eradicate the person who’s behaving badly, but feeling compassion for that person. Sometimes there are inherently bad people in the world, but the effort needs to be made in changing them. If you can change the worst person, then everything else should be easy.

We need to focus our collective energy on transforming the handful of bad-thinking people in the world, rather than add violence to violence.

As you point out in your talks, there’s a strong emphasis on the environment in both the Ganohonyokh, the ancient Haudenosaunee Thanksgiving address, and in the Great Law. It seems to me that we’re still talking about it – and haven’t really made much headway.

DMH: The Thanksgiving address is integral to the Haudenosaunee worldview and cultural practices – it’s one of our most ancient texts. The Great Law came much later, but both speak of many of the same ideas.

I’ve been bringing elders to speak at McMaster since the very beginning of the Indigenous Studies program, and every one of them had the exact same knowledge: you can’t keep destroying the land. You’re putting humanity in peril. You’re going to reap what you sow if you continue to be violent.

Our people went through a genocide, a massive apocalypse of our own. Recent studies tell us that there were roughly 50 million Indigenous people in North America before contact, and in a few couple of hundred years, we’re down to roughly a million people, or even less. But as I read scientific climate reports out of the UN, I can see that people are slowly starting to realize that we survived, so there must be things that we can teach the world.

We do have a message and it requires action and sacrifice – but there’s a bigger picture, and I’m just one person out of many who are working towards trying to raise the consciousness of this country.

RM: Our elders saw a truly global challenge, and we see the same: it’s not just for Indigenous people to be mindful of the environment – it’s something that affects us all. The environment doesn’t stop at the boundaries of the reserve. We’re just starting to realize that, 30 years after those elders first spoke to us.

How do you see the Great Law aligning with the teachings of Gandhi?

DMH: Our people have a solid understanding that our thoughts will manifest in our actions, as did Gandhi – those ideas come from the same core of peace, which is peace through communication and allyship.

Those concepts are important in Gandhi’s work, as is decolonization, although he didn’t call it that. He would have recognized our struggle to find self-governance, self-sufficiency and autonomy, but also not meeting violence with violence. In the spirit of decolonizing and peacebuilding, the Great Law of Peace is our “Gandhi-ism” – there’s synergy between our philosophy and what Gandhi taught.

There’s research that shows that the Great Law influenced the creation of the United States constitution – but I can’t help but think that something got lost in translation.

RM: Yes, we had an influence on America. Sorry, world!

DMH: I don’t think that should be the Great Law’s claim to fame – I think the comparison with the American constitution diminishes the Great Law. The Americans appropriated and decontextualized it, so it no longer resembled what our ancestors were trying to show them: they took the idea of checks and balances, the coming together at a federal level but still maintaining autonomy – but they left out the parts about female leadership, the opposition to slavery, and anything about the land itself.

A connection to the United States isn’t a great attribute for something that’s actually very beautiful.

Talk to me a little about the role academia has played and can play when it comes to Indigenous peoples and communities.

DMH: Academia has had its leading role in perpetuating racism and genocide, including the sterilization of Indigenous women, and eugenics committees – that doesn’t get taught. Academia has labeled, organized, categorized and controlled everything Indigenous in this country, and they have to recognize that they were part of a system that worked with religion to colonize our people and appropriate our land, our customs and our culture.

Academia has to play a very active role in dismantling colonization and ecocide. That’s the truth, and there can be no reconciliation without truth.

Is the Great Law a relic of the past? Or does it still have relevance today?

RM: Both – but it’s very much alive. It was something that was developed in a different place and time, when our people were all on the same page with the language, and how the language worked in our daily lives and cultures.

That’s changed, obviously, but it has some amazing thinking in it – ideas that have been brought forward into 2021. Its handprints and fingerprints and footprints are everywhere in our daily lives – we’re still talking about it. We may have different interpretations of it, but it’s not stuck in the past – it’s still here.