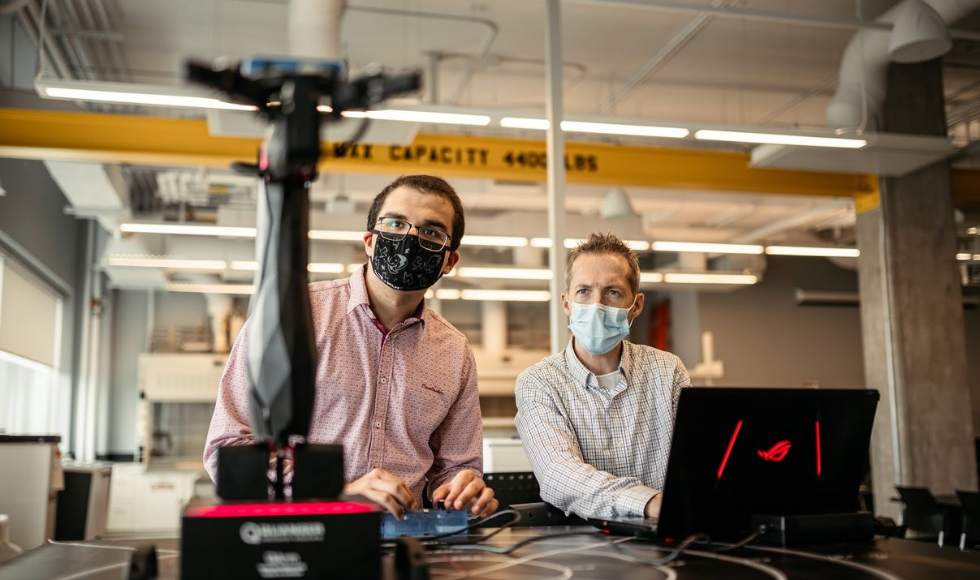 In September 2020, in between two waves of the pandemic, 1,100 first-year McMaster students began their engineering studies entirely from home. It was the inaugural year of McMaster Engineering’s new first-year course as part of The Pivot, the largest transformation of the Faculty’s curriculum in its 62-year history.

Now, a new cohort of first-year students are the first to experience the transformed design studios, labs and lectures “IRL” – in real life.

Read more: An in-depth look at the new first-year curriculum

In a blended format, instructors guide students through a series of lab activities and design projects. Included among the many hands-on activities, students reinforce concepts in computing by controlling terrestrial drones and robotic arms to complete a task.

Instructors also use earpieces for livestreaming to remote learners, and conference speakers and webcams are provided for in-person and virtual students to connect with each other.

“We really put a lot of hours into working out those logistics. Last year, the students were awesome because they took a really challenging situation, being stuck at home for an entire year, and they made the best of it by putting their best foot forward and rolling with the punches as they came.” — Colin McDonald

In addition to foundational theory and hands-on practice, the goal of the curriculum is still to help students become resilient and “unfazed by failure.”

“In their design projects, we give students opportunities to prototype and build things early,” McDonald says.

“We’ve seen from the iBioMed program that when students build something, they might realize, ‘Wow, this is actually a lot harder than I thought it was.’ And that’s okay. We don’t attach grades to the prototype – because it might fail.”

“More of our focus is on the students reflecting on their design, reflecting on the roadblocks they ran into. We highlight and recognize those innovative solutions that are implemented successfully after that reflection.”

A recap of the new curriculum’s early success was published as a special issue article in The Canadian Journal of Chemical Engineering this year, authored by Carlos Filipe, Ishwar K. Puri, Beth Levinson, Shelir Ebrahimi, Vince Leung and Jake Nease.

“We describe how a path can be designed for learners to proceed towards this goal [of succeeding academically and professionally] and describe the rationale used to create its foundational steps,” reads the paper’s abstract, before delving into details about McMaster Engineering’s summer bridge program for incoming first-year students, the new 13-unit course, upper year workshops, and hybrid assessments for collaborative learning.

For the fourth consecutive year, McMaster ranks among the top Canadian schools with a broad range of research and doctoral programs.