The new face of Canadian tech: how a McMaster valedictorian is reinventing smart TV 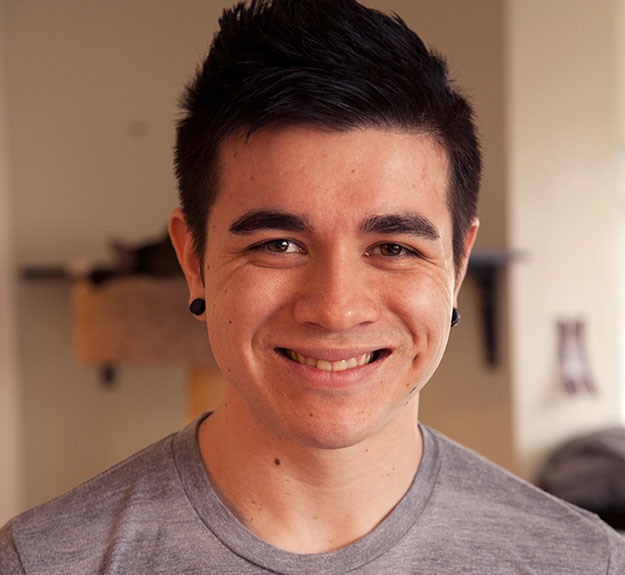 It all started with an idea. Engineering valedictorian and budding entrepreneur Matthew Gardner, 24, is carving his own path with Videostream. The startup company employs five people at its Kitchener, Ont. office, and offers a revolutionary new approach to streaming video files on a smart TV.

Matthew Gardner quite literally built his company from the ground up.

When the McMaster engineering student assembled a small development team in February, 2013, he spent the next three months sleeping on the living room floor of a rundown rented house in Kitchener, Ont. The tiny room also served as the team’s ad hoc workspace when they weren’t putting in long hours at a local startup accelerator, HYPERDRIVE.

Times were tough, but a lot has changed since then.

Gardner’s startup company, Videostream, has garnered more than 180,000 users since officially launching 14 weeks ago. The team is now living in a clean, five-bedroom home that doubles as the nerve centre for their burgeoning operation. These days, the living room is strictly reserved for business.

“For a while it’s all Ramen instant noodles and very little sleep, and things can be pretty stressful. But then you reach a point where everything starts happening in a hurry and it’s an exciting feeling,” said Gardner, who will graduate from McMaster on June 11 and serve as one of two valedictorians for the Faculty of Engineering. “I already have a full-time career waiting for me after graduation.”

Videostream is ingeniously simple, and entirely practical. The service allows users to wirelessly stream all manner of video files from a computer to a smart TV, and eliminates many of the compatibility and quality issues that plague the state-of-the-art televisions. Prior to Videostream, most smart TVs would only accommodate roughly 20 per cent of video file types, explained Gardner.

“A lot of universities make you choose your major during first year, and I wanted to try a little of everything,” said Gardner. “Having a common first year at McMaster was a huge advantage. You could try all of the disciplines, and figure out exactly what you wanted to do.”

For example, if a user has an MKV, WMV or AVI video file on a laptop, that file won’t necessarily be compatible with a smart TV. Videostream allows users to play all file types on the big screen with just the click of a button.

Gardner, who will earn a degree in Mechatronics Engineering this month, credits McMaster with giving him the flexibility to test ideas and develop a company while also focusing on his studies. He completed his final two undergraduate classes this past term, while commuting back and forth to McMaster from the company’s home base in Kitchener and devoting countless hours to Videostream.

“The professors at McMaster have always been very accommodating,” explained Gardner. “It’s an interesting situation when you have to say, ‘I have a meeting in California to meet a potential business connection. Can we reschedule that test?’ But it was never a problem. They always said yes.”

While completing his undergraduate degree, Gardner also took Master’s level classes in place of traditional electives thanks to the University’s innovative Engineering Entrepreneurship and Innovation (MEEI) program. Through MEEI, Gardner studied everything from financial planning and environmental sustainability to accounting for small businesses, and learned how to take his startup company to the next level.

He also secured $45,000 in funding through the Ontario Centres of Excellence (OCE) and McMaster’s FedDev Scientists and Engineers in Business Fund, which helped furnish the new Videostream offices and kick-start full-time salaries for all five employees.

Born and raised in Burlington, Ont., Gardner grew up in a “tech-heavy” household with plenty of opportunities to dabble in computer technology.

His father, Craig, was a source of inspiration from day one. Gardner’s family was the first on the block to have a personal computer, and Craig taught his son basic HTML coding while he was still in elementary school. After graduating from Burlington’s M.M. Robinson High School, Gardner chose to study at McMaster due to the academic freedom offered in the Faculty of Engineering.

“A lot of universities make you choose your major during first year, and I wanted to try a little of everything,” said Gardner. “Having a common first year at McMaster was a huge advantage. You could try all of the disciplines, and figure out exactly what you wanted to do.”

As for inspiring the next generation of student entrepreneurs, Gardner feels its important to get your feet wet at someone else’s startup before taking the plunge. But if you’ve got a unique idea, the right skills and an eager band of colleagues willing to follow your lead, there’s no time like the present.

“Don’t put it off for too long,” says Gardner. “Take chances while you’re still able to, and see what happens. You won’t regret it.”

Watch a demonstration of Videostream below: