Taking action on poverty: “It might seem insurmountable, but it’s not” 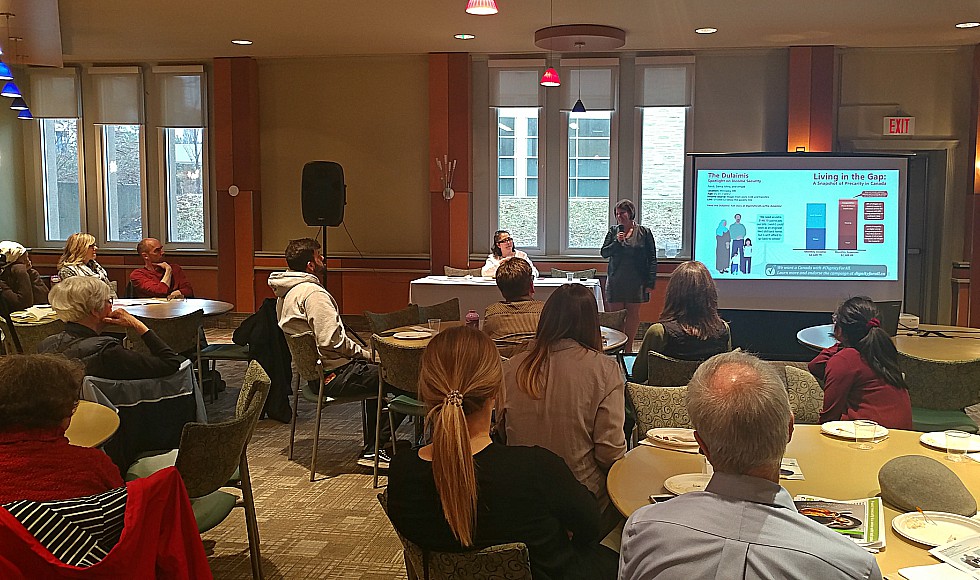 How can we reduce poverty in Canada? How can we build a country that promotes the wellbeing and social inclusion of all?

These were two of the questions discussed at Beyond Income, a recent event hosted by the McMaster Community Poverty Initiative (MCPI) which looked at the complexity of poverty in Canada, and explored what strategies to support those experiencing poverty could look like – both at the provincial and federal levels.

“We titled this event ‘Beyond Income’ because you can’t just look at income without looking at the other supports that are needed for someone to achieve wellbeing,” says MCPI Director, Stephanie Baker Collins, also an associate professor in McMaster’s School of Social Work.

“Wellbeing includes adequate income, but it also includes things like decent housing, food security, affordable child care, or access to medicine for chronic health conditions,” she says. “If these kinds of services aren’t available to people, then income has to do a whole lot more, and a basic income might not be sufficient ­– it has to be a multi-pronged approach and that’s what we wanted people to think about with this event.”

Members of the McMaster and Hamilton communities gathered on campus for the event which featured two guest speakers who shared their expertise, perspectives and advocacy work on issues related to poverty elimination.

Natalie Appleyard, a socio-economic policy analyst at Citizens for Public Justice who is helping to lead Dignity for All: The Campaign for a Poverty-Free Canada, spoke about her organization’s efforts to advocate for a national anti-poverty plan, pointing out that 1 in 7, or 4.8 million, Canadians are currently living in poverty.

Appleyard described the scope of the issue and its impact by sharing a series of case studies that illustrate the precarity facing families and individuals, and outlined the kinds of programs that could be included in a comprehensive anti-poverty plan, from a national jobs creation strategy, to universal, publicly funded child care.

The audience also heard from Laura Cattari, Campaign Coordinator for the Hamilton Roundtable for Poverty Reduction, the President of Canada without Poverty, and who, as a member of an advisory group working with the Ontario government, contributed to the creation of Income Security: A Roadmap for Change, a 10-year plan for income security reform in Ontario.

“Poverty might seem insurmountable, but it’s not,” said Cattari who spoke about her involvement in the Fix the Gap campaign, which advocates for social assistance reform – a critical component of poverty reduction. She also shared her thoughts on Ontario’s Basic Income Pilot and spoke about the need to take a more human approach toward those living in poverty.

Baker Collins says she hopes that as the provincial election approaches and as the federal government prepares to roll out its poverty reduction strategy, discussions like this one will help put the issue of poverty on the agenda.

“I’m hoping people will pay attention to things like the upcoming provincial election and ask themselves what would the various parties do about poverty reduction and how might that influence who I vote for?” she says. “I’m hoping to give people a lens through which to judge policy proposals and party platforms.”

The McMaster Community Poverty Initiative(MCPI) was formed in 2007 by concerned faculty, staff, and students who were interested in expanding McMaster’s role in addressing local conditions of poverty. The MCPI has membership from faculties across campus, and works to enhance relationships between McMaster and Hamilton, with a focus on poverty reduction.

The MCPI is supported by the McMaster’s Office of Community Engagement.