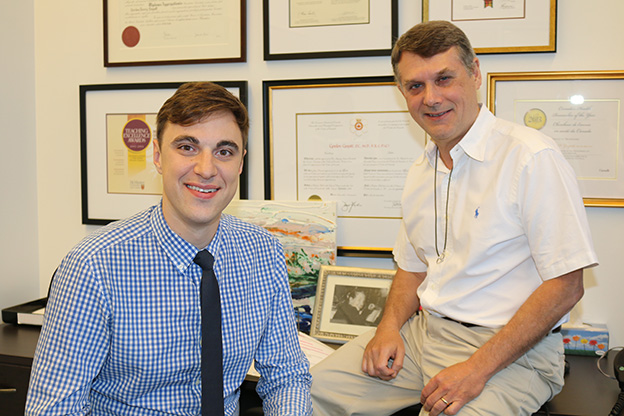 McMaster research, published online Monday by the Annals of Internal Medicine, has demonstrated the benefits of corticosteroid therapy for one of the most common serious medical conditions.

“Our study should lead to an important change in treatment for pneumonia,” said lead author, Dr. Reed Siemieniuk, a physician and a graduate student at McMaster University. “Corticosteroids are inexpensive and readily available around the world.  Millions of patients will benefit from this new evidence.”

Lower respiratory infections are the second most common cause of premature mortality globally. In developed countries, hospitalization for community-acquired pneumonia is common and is often associated with acute respiratory distress syndrome requiring mechanical ventilation and with significant mortality.

The research, led by investigators of McMaster’s Michael G. DeGroote School of Medicine and including a number of international collaborators, summarized the evidence from 13 randomized trials involving more than 2,000 patients.

Evidence showed patients with community-acquired pneumonia who received corticosteroids were discharged from hospital one day sooner. Results also suggested that corticosteroid treatment reduces the need for mechanical ventilation (or the requirement for a breathing tube) from nine per cent to five per cent of patients; and the likelihood of a life-threatening complication called acute respiratory distress syndrome from eight to two per cent of patients. The results also raised the possibility of a significant reduction in death rates from nine to 10 per cent of patients down to five to six percent.

“Seldom do we see a major advance in treatment of a condition as common as community-acquired pneumonia,” said Dr. Gordon Guyatt, the study’s senior investigator and a professor of clinical epidemiology and biostatistics at McMaster.

“Corticosteroids over short periods are safe, and we now know that they achieve important benefits in a serious and common medical illness.”