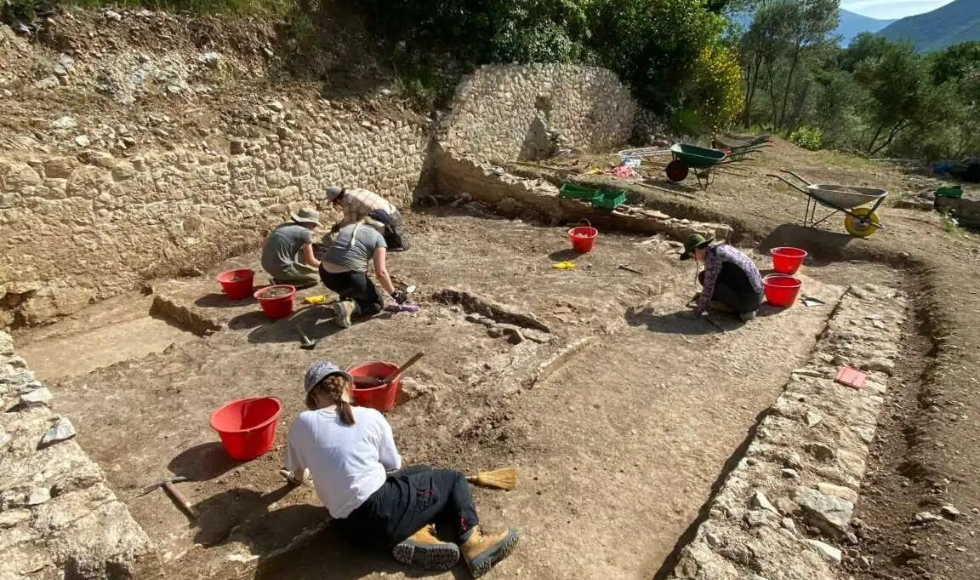 McMaster and Saint Mary’s students excavate a room at the back of the Villa di Tito. (Dept of Classics photo)

BY Sara Laux and Martin Beckmann

The ruins of a Roman villa in Italy’s Velino Valley, about 80 km northeast of Rome, may hold important clues to early first-century CE life in the region. At least, that’s what the Villa di Tito Archeological Project is hoping to find out.

Led by the chair of McMaster’s classics department, Martin Beckmann, and Myles McCallum of St. Mary’s University (SMU) in Halifax, the excavation project began in 2018 but went on hiatus during the COVID-19 pandemic.

This summer, Beckmann, McCallum and students from both McMaster and SMU travelled back to Italy to pick up where they left off — carefully digging and sifting centuries of earth and uncovering both the artifacts and architecture that hold fascinating clues to the community in and around the site.

No one definitively knows who owned the villa, but local tradition says that it belonged to Titus, the eldest son of the emperor Vespasian, whose family owned property in the area.

And while the villa, which has views of the Via Salaria and Lake Cutilia, was undoubtedly constructed for the Roman elite, the excavation’s most interesting finds shed light on the lives of the labourers, servants and slaves who made life at the villa run smoothly for its elite occupants.

Much of the superstructure of the villa has been destroyed over the centuries, but what remains includes a series of rooms at the back of the building — one monumental, and the others utilitarian — and a number of large chambers once used for processing and storing agricultural produce.

In 2022, the team made several discoveries in one large room, which was divided into two sections — although all that remained of the walls was the plaster that covered them and the nails that held the room’s wooden beams together.

Soot-blackened cooking vessels indicated that one part of the room was used for cooking, while two amphorae suggested that the other side was used for storage.

Even more interesting was what the team discovered in a sealed-off well that dated from before the villa was built. The builders of the villa filled in the well and built a wall and floor above it — but not before placing a number of ritual items in it, including the remains of a piglet, a ceramic lamp, a silvered bronze mirror that had been ritually broken, a large bronze ring, and a coin of the emperor Augustus.

In total, six McMaster students participated in the project: graduate student Robyn Bachmeier, who wrote her MA thesis on the coins found in the villa during the 2019 excavations, and MA student Melissa Choloniuk, who also participated in the 2019 trip; and undergraduates Adam Boccia (classics), Julia Miller (classics), Tara Simeunovic (computer science) and Rosalie Swenor (mathematics).

For Boccia, participating in the excavation was the perfect fuel for his interest in classics.

“By participating in this field school, I was allowed to witness the unearthing of ancient history firsthand, based on the many artifacts we found, as well as reaching some floor areas that the Romans themselves walked on. It was an unforgettable learning experience.”