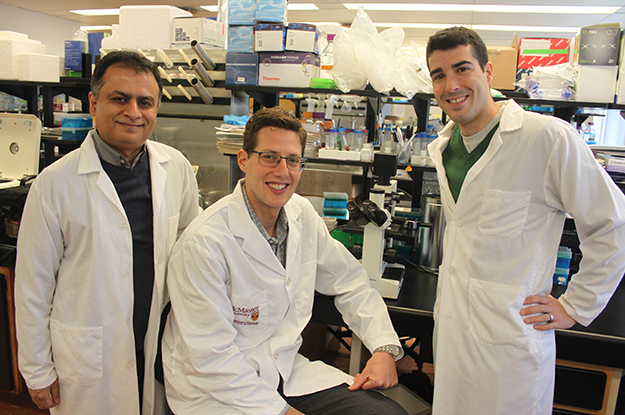 Researchers from McMaster have identified an important hormone that is elevated in obese people and contributes to obesity and diabetes by inhibiting brown fat activity.

Brown adipose tissue — widely known as “brown fat” — is located around the collarbone and acts as the body’s furnace to burn calories. It also keeps the body warm. Obese people have less of it, and its activity is decreased with age.

Until now, researchers haven’t understood why.

There are two types of serotonin. Most people are familiar with the first type in the brain or central nervous system which affects mood and appetite. But this makes up only five per cent of the body’s serotonin.

The lesser-known peripheral serotonin circulates in the blood and makes up the other 95 per cent of the body’s serotonin. McMaster researchers have discovered that this kind of serotonin reduces brown fat activity or “dials down” the body’s metabolic furnace.

The study, published Monday in Nature Medicine, is the first to show that blocking the production of peripheral serotonin makes the brown fat more active.

Read more about the team’s findings in The Hamilton Spectator.

“Our results are quite striking and indicate that inhibiting the production of this hormone may be very effective for reversing obesity and related metabolic diseases including diabetes,” said Gregory Steinberg, the paper’s co-author and professor of medicine at the Michael G. DeGroote School of Medicine. He is also co-director of MAC-Obesity, the Metabolism and Childhood Obesity Research Program at McMaster.

“Too much of this serotonin acts like the parking brake on your brown fat,” he explained. “You can step on the gas of the brown fat, but it doesn’t go anywhere.”

The culprit responsible for elevated levels of peripheral serotonin may also have been found.

“There is an environmental cue that could be causing higher serotonin levels in our body and that is the high-fat western diet,” said Waliul Khan, co- author, associate professor of pathology and molecular medicine for the medical school and a principal investigator at Farncombe Family Digestive Research Institute. “Too much serotonin is not good. We need a balance. If there is too much, it leads to diabetes, fatty liver and obesity.”

The majority of serotonin in the body is produced by tryptophan hydroxylase (Tph1). The McMaster team found that when they genetically removed or inhibited this enzyme that makes serotonin that mice fed a high-fat diet were protected from obesity, fatty liver disease and pre-diabetes due to an enhanced ability of the brown fat to burn more calories.

This is in contrast to earlier weight loss drugs which worked to suppress appetite by affecting levels of brain serotonin, but were associated with problems including cardiac complications and increased risk of depression and suicide.

“Moving forward, we think it’s a much safer method to work with increasing energy expenditure instead of decreasing the appetite, which involves more risks,” said Steinberg.

The researchers conclude that reducing the production of serotonin by inhibition of Tph1 “may be an effective treatment for obesity and its comorbidities,” and so the team is now working on a pharmacological “enzyme blocker.”

This study, conducted over five years, was supported by funding from the Canadian Diabetes Association, the Canadian Institutes of Health Research, Crohn’s and Colitis Canada, MAC-Obesity and the Natural Sciences and Engineering Research Council of Canada.