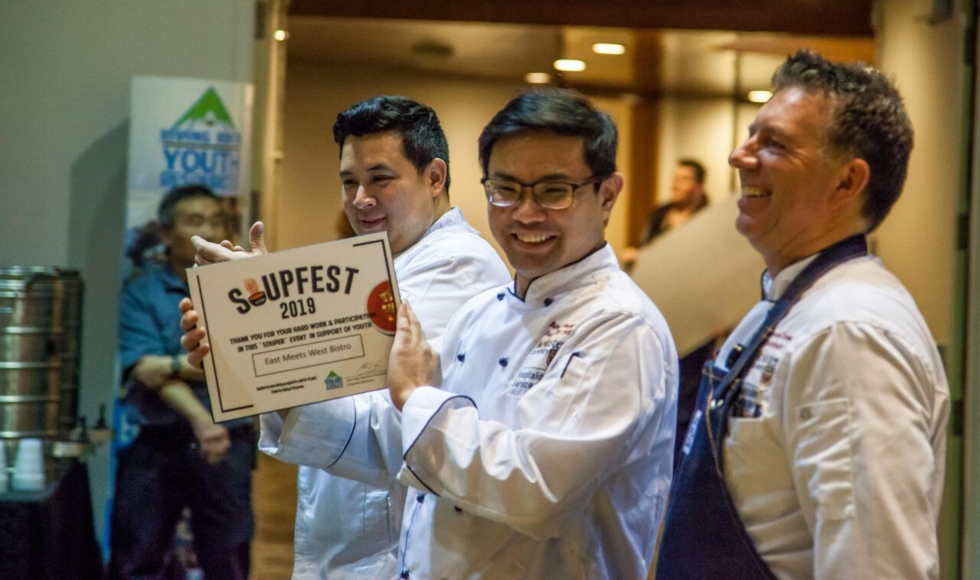 Andy Leung and the McMaster team won most creative soup at Soupfest. (Photo by Colin Hatherill.)

“The most famous thing on campus is the Buffalo chicken wrap,” says Leung. “That’s a staple in the university world. That’s what students like, so that was an inspiration for me.”

Leung developed the recipe (see below), worked out the budget and then spent an entire weekend pre-making 200 litres of soup that turned into more than 1,400 portions served at the event.

“It was a tough weekend of preparation,” he said. “One of the hardest things was to get the consistency of the soup. I had to puree two litres of the soup at a time using a Vitamix. So that was a good four to five hours of just blending.”

The East Meets West Bistro beat out about 20 other Hamilton-area restaurants for the creative prize. Visitors formed a long line in the Hamilton Convention Centre to get the vegetable puree base topped with fried chicken, ranch sauce and Tabasco pearls.

Leung says he’s not usually a big fan of competitions, but he sees the value in participating in the event.

“The best thing was to have the whole team get together and get away for a day, try something new together and help the community out and give back,” he said. “Sometimes you have to get out there to see what others are offering. We didn’t win best soup, we were third overall, but next year we’ll try again. Last year, we didn’t place for best soup. This year, third. Next year we’ll get even a little bit better. It’s all about self-improvement.”