Software entrepreneurs move their projects from classroom to showroom 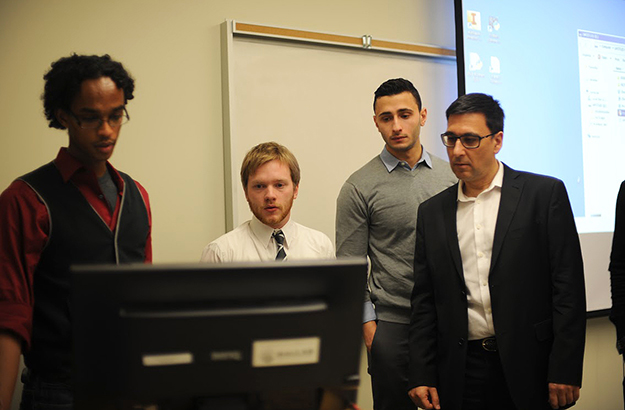 Associate professor Christopher Anand (far right) said the competition, now in its third year, measures projects not only on their technical achievements, but on their potential to succeed in a social or business sense — a case the students must prove. Students left-to-right: Abdullahi Sheikh, Mitchell Errygers, Ramy Samad.

Three winning projects in a competition for students studying software entrepreneurship are on their way from the classroom and to the public marketplace, where they may well soon become part of consumers’ lives, from the apartment lobby to the bus stop and even to the archery range.

The top three projects from Christopher Anand’s fourth-year class – part of the Computing and Software program in Engineering – have been publicly announced this week, and efforts are already under way to take them from the theoretical world of the classroom to the concrete world of the practical.

The winning project is a cloud-based service called Buzzr, which can redirect buzzer calls from apartment visitors in lobbies to the cell phones of tenants, allowing them to buzz in visitors or delivery people, even if they aren’t home, or if they don’t have a land line, as is increasingly common. The service allows users to redirect lobby calls to multiple phones in multiple area codes, and lets them route calls to specific phones at specific times.

“There may be millions of people who need this service,” Anand said.

One of the runners-up, BusTap, allows people at the bus stop to tap a radio-frequency sticker or snap a QR code on the same sticker to learn immediately when the next bus will arrive, using real-time information available from the Hamilton Street Railway.

Other users can type in a short web address to access the same information. In all cases, users can learn instantly when the bus is coming – an improvement over the current system where riders dial in and navigate a menu of prompts, Anand says.

The BusTap team is now in talks with the HSR about launching a wider test of the project, with an eye to making the app available throughout the system, and eventually selling it to other public transit systems.

The other runner-up is a piece of software that allows users safely to record the speed of projectiles such as bullets, arrows and paintballs. There is already a device called Shooting Chrony that can record such speeds, but it takes readings from the target end of a shot, and does not store or sort the speeds. The McMaster developers have created software that stores, sorts and transmits the data wirelessly, with potential uses in tournaments, for example.

Shooting Chrony is already planning to add the McMaster product to its offerings.

Anand said the competition, now in its third year, measures projects not only on their technical achievements, but on their potential to succeed in a social or business sense – a case the students must prove. The panel of judges includes business people from the field, who use their experience in evaluating the potential of the projects.