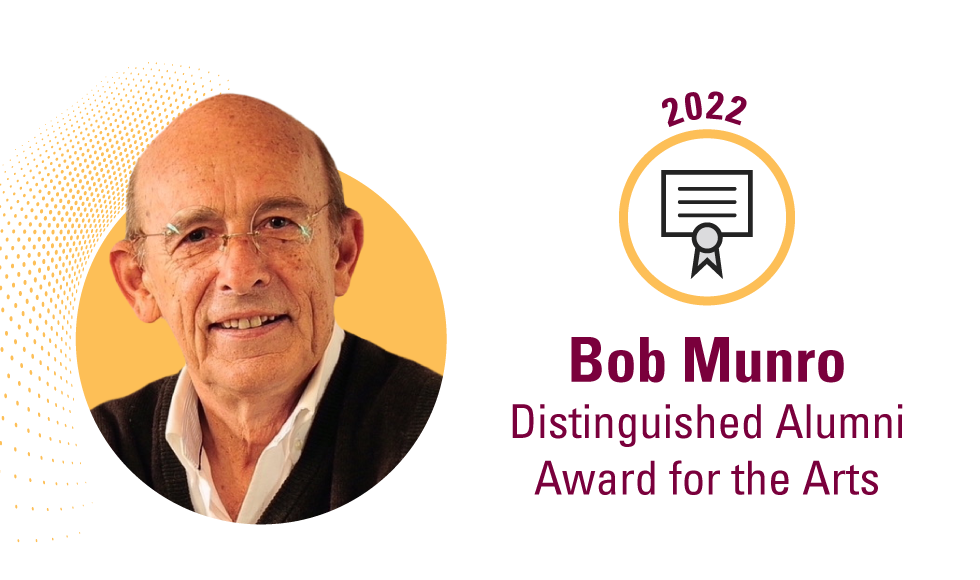 The story of Bob Munro ’66, the 2022 Distinguished Alumni Award – Arts recipient, is an inspiring journey involving three continents, six countries, 11 cities, the United Nations, an international family, and the youth in one of Africa’s largest and poorest slums.

From his home in Nairobi, Kenya, Munro modestly recounts his work over the past six decades and discusses his recent Order of Canada honour for the impact he’s made, from the local to a global level.

It all began in his formative years living in St. Catharines and studying at McMaster, Munro says.

“When I started school in St. Catharines in 1947, more than half my classmates were children of WWII refugees from many different countries. So I learned early on the need to understand other cultures. It helped shape my character, and it sparked an interest in international issues. As I grew up in a little ‘United Nations,’ it made my later transition to an international career and life abroad much easier.”

“That triggered my dream to some day work for the United Nations.”

He accomplished that dream, even after struggling during his first year at McMaster.

“I was the first in my family to attend university. Thanks to friends and many friendly professors, I gradually acquired the self-discipline I needed, as well as more effective study methods and time management skills.”

“I also learned at McMaster a motto I’ve always carried with me: Think before you speak. Read before you think.”

After graduating with a degree in history, Munro began an international career that led to setting up a new Environmental Division in the UN’s Economic Commission for Europe in Geneva.

He helped prepare the Action Plan at the first UN Environment Conference in 1972 in Stockholm which launched the worldwide environmental movement.

As a senior policy adviser for the World Commission on Environment and Development (WCED) from 1984-87, Munro played a key role in the historic report Our Common Future, which defined and made sustainable development a top global to local policy priority.

MYSA and a world of change

During the 1980s and ’90s, he continued serving as a senior policy adviser to the UN, initially from Stockholm, and then from Nairobi, when his wife Ingrid was appointed the global director for the 1987 International Year of Shelter for the Homeless. From that point onward, Kenya became their home.

“In the late ‘80s, we were adopted by three young brothers living on the streets. That permanently anchored our family in Nairobi. Our oldest daughter was adopted from South Korea and our younger daughter was homemade in Sweden; so our nuclear family of seven is a little United Nations on its own — with representatives from four countries on four different continents!”

Troubled by the severe poverty in the slums of Kenya, Munro turned to his Canadian childhood experiences as he developed a plan to help.

“Growing up in St. Catharines in the 1950s, school was what we did in between Saturdays. With our fathers volunteering as organizers and coaches, on Saturdays we put on our team uniforms and proudly played with and against our friends in summer baseball and winter ice hockey leagues,” he remembers.

“Through sport, we learned character-building lessons and social skills which helped us then and later in life. We learned that success requires self-discipline, constant training, and teamwork. We learned to cope with losing as well as winning. And we also learned to respect the rules, the referees, our coaches, our teammates, and our opponents.”

One day in August 1987, while watching kids in the Mathare slums playing with their homemade juala soccer balls on a bumpy patch of open ground, “I had a flashback to my youth and thought, ‘Why shouldn’t these kids have the same chance I had to play with real rules, balls, and coaches?’ The Mathare Youth Sports Association (MYSA) became my belated and grateful payback to the volunteers who organized our youth sports leagues in St. Catharines.”

MYSA is a self-help youth sports and community development project using sport as the starting point to help children in the Mathare Valley and neighbouring slums in Nairobi. In the decades since it began, MYSA has had a profound global impact by pioneering and inspiring the now worldwide movement on sport for development and peace.

“The main reason for MYSA’s success over the last 35 years is that it’s owned and managed by the youth themselves. The youth leaders elected annually to the MYSA Executive Council, Sports Council, Community Service Council and 16 Zonal Committees have an average age of 17 years and, for gender balance, exactly half are females,” Munro says.

“MYSA’s motto is ‘Giving youth a sporting chance on and off the field.’ On the field, MYSA teams have won many national and global tournaments, including 15 gold medals at the Norway Cup, the world’s largest international youth tournament, and also won two FIFA Football for Hope youth tournaments held in conjunction with the FIFA World Cup,” Munro says.

Off the field, MYSA has earned many international awards, including the Help for Self-Help Prize, the World Sports Academy/Laureus Sport for Good Award, the Common Ground Award for Community Peace Building, the Beyond Sports Award for Global Leadership in Sport, and the PlaytheGame Award for Upholding the Ethical Values of Sport.

But “the most important achievement by far is producing new heroes, role models, and leaders in our communities,” Munro says.

“The over 140,000 MYSA alumni now include many high-achieving leaders in the public and private sectors in and outside Kenya.”

While personal recognition and awards were never part of his motivation. Munro says he felt honoured to be recognizd with the Order of Canada this year.

“Whenever a bit boastful as a teenager, my mother repeatedly scolded me to ‘never forget you can do a lot more good in this world if you don’t worry about who gets the credit.’ I then built a satisfying career as an environment and sustainable development policy adviser to ministers and even some prime ministers in over 50 countries based on her stern and wise advice.”