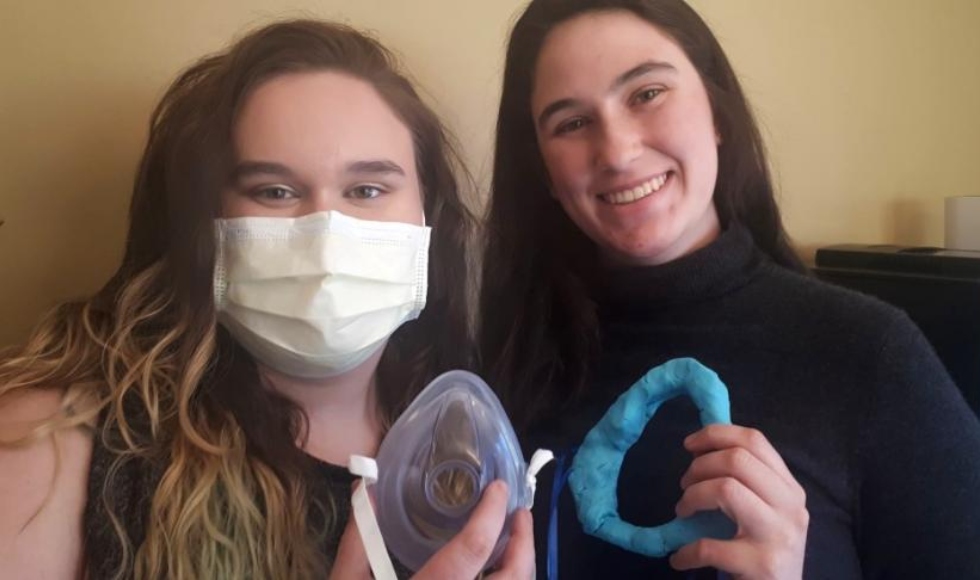 When Amanda Tomkins heard the news of Ontario’s first COVID-19-related death in Barrie, Ont., she herself was in Barrie, social distancing at home with family.

“That really hit home – that it’s something we needed to start getting involved with and taking action towards,” she said.

As more news unfolded, Amanda started having conversations about the COVID-19 crisis with her younger sister, Kayla, who is a nursing student at Georgian College.

“My sister would tell me stories of how some of her teachers worked during the SARS outbreak, and how they had never experienced anything quite to the same magnitude of what’s going on right now,” says Amanda, a third-year electrical and biomedical engineering student in the iBioMed program.

“Talking with [Kayla] and hearing about the personal protective equipment shortages in the news put into perspective that it’s a very big deal – a very serious issue.”

The next week, on Thursday, March 26, Amanda got an email from one of her professors, Qiyin Fang, with a challenge to a group of students who expressed interest in helping with the faculty’s COVID-19 research initiatives.

The challenge was to design a mask that could be used in a similar way to an N95 respirator, with a tight seal while being comfortable for healthcare workers to wear for hours on end.

“I read the email and went to my sister to start brainstorming ideas. She knows more about N95 masks and how they have to be properly sized,” says Amanda. Kayla then brought out her nursing kit, which had a surgical mask and a pocket ventilator, so they could experiment with sizing and fit.

The sisters also consulted their mother’s sleep apnea machine, which has a nozzle and shape that Amanda thought could work.

After building the first model with what they had on hand – some blue clay – Amanda put together a three-page proposal and sent it to Fang on a Saturday night, not expecting too much.

Two days later, she was on a call with Fang, engineering’s associate dean of research, John Preston, and others from the faculty to discuss how to move the design along for potential manufacturing.

“It all happened so quickly,” Amanda said. “But it goes to show that there’s a really urgent need to help create a solution for our frontline healthcare workers.”

On getting involved and helping

Amanda had been involved at Mac as an iBioMed program ambassador for future students and a teaching assistant for first-year students – and this was just another way for her to give back, she says.

“There’s so many different ways you can help, and anyone can help,” she says.

Amanda had a co-op position in Germany lined up for the summer, which is no longer moving forward. While initially disappointed, she chose to look at the situation with a positive spin.

“It definitely opened up a lot of time – I was spending a lot of time before working on visas, and now I can use it for initiatives like this,” she says. “I can always apply again next year.”

The team spearheading what’s been dubbed “The Amanda Mask” is now developing a prototype and getting it ready for testing. They’re also reaching out to manufacturers for collaboration opportunities.

“A lot of it can be done from home, you’d actually be surprised,” she says. A few students who are in Hamilton have been helping with prototyping, with the rest of the team staying connected through FaceTime and Teams.

“Our students have really been spectacular. They’ve really responded in a positive way. I’m very proud of that in what’s really a horrible situation,” says Preston, associate dean of research and external relations at McMaster Engineering.

To hear Amanda speak about her project, check out this virtual Q and A with John Preston.