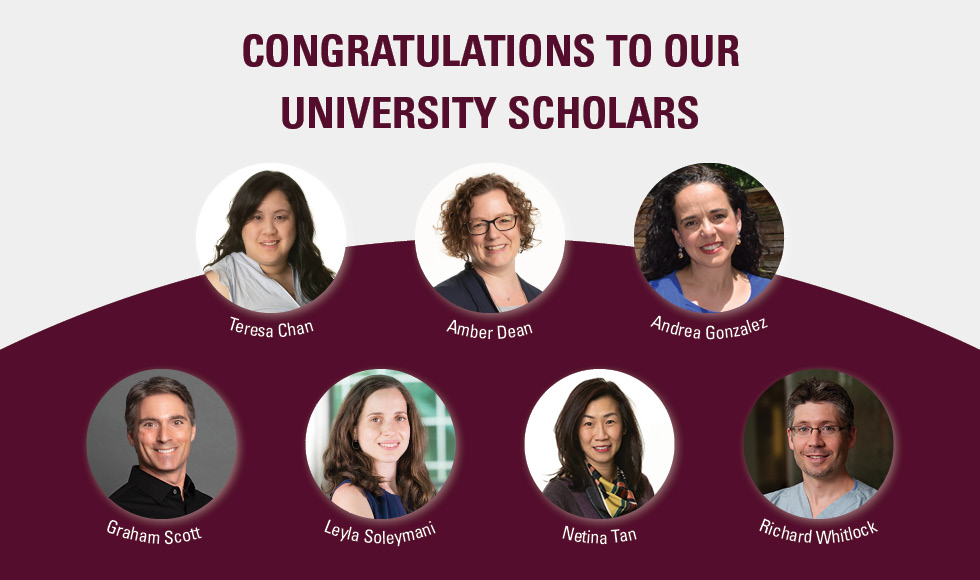 Seven McMaster professors have been named 2021 University Scholars, an award that recognizes the achievements of mid-career researchers who are considered global leaders in a number of diverse research areas and academic disciplines.

Recipients have distinguished themselves as international scholars and have demonstrated a commitment to the discovery, communication and preservation of knowledge, excellence in education and pedagogy, and to serving local and global communities.

Each University Scholar will receive $15,000 each year of the award (up to $60,000), provided by the provost and vice-president academic and the recipient’s dean.

The 2021 University Scholars are:

Teresa Chan, Associate Professor in the department of medicine

Chan recently received the Canadian Association of Emergency Physicians Ian Stiell Researcher of the Year Award in recognition of her outstanding contributions to emergency medicine research. She has examined how health professionals can best use social media to increase health literacy — among colleagues as well as the public. Chan developed McMAP, the McMaster Modular Assessment Program, and published educational resource textbooks about its McMAP tools, which have been adopted nationally and internationally.

Richard Whitlock, Professor in the department of surgery

Whitlock is the lead researcher and driving force behind the Perioperative & Surgery Program at the McMaster University/Hamilton Health Sciences affiliated Population Health Research Institute (PHRI). These contributions to the development of a national and international team of collaborators for the conduct of large-scale clinical trials has the potential to influence patient care on a worldwide scale. His work has received funding and support from highly coveted and competitive national sources including the CIHR, the Heart and Stroke Foundation of Canada and the Canadian Stroke Prevention Intervention Network.

Netina Tan, Associate Professor in the department of political science

Tan’s research focuses on electoral politics, authoritarianism, gender and politics, digital threats to democracy, and digital media and elections in East Asia. The award recognizes her contributions to enhancing the understanding of the role of gender and ethnicity in politics, particularly the importance of institutions and rules on representation, as well as her significant leadership and service to the university and her professionalism in teaching, service and research. Tan recently received funding from the International Development Research Centre to continue her pioneering work on gender and political parties in Myanmar, research she is conducting in collaboration with local organizations in the context of challenges to democratization and free and fair elections in that country.

Amber Dean, Associate Professor in the department of English and cultural studies

Dean’s book, Remembering Vancouver’s Disappeared Women: Settler Colonialism and the Difficulty of Inheritance, was awarded the Outstanding Scholarship Prize from Women’s and Gender Studies et Recherches Féministes, the Best Book in Canadian Studies Award from the Canadian Studies Network, and the Faculty of Humanities’ Donald Shepherd Book Prize. This award recognizes her work on cultural memory and public mourning, and her commitment to experiential and community-engaged research and teaching.

Soleymani is a leader in the field of miniaturized biomedical devices, and has made significant contributions in studying and developing biosensors, biomedical devices, novel materials and micro- and nano-devices that have garnered significant international attention and recognition. They include a hand-held device that detects biomarkers for cancer. She’s also involved in strategic decision-making and serves on committees for defining faculty and chair positions in Bio-Innovation.

Graham Scott, Associate professor in the department of biology and Canada Research Chair in Comparative and Environmental Physiology

Scott is known for his work in the area of animal physiology, and on understanding how animals adapt and survive in high altitudes with insufficient oxygen, and other harsh environments. His work improves our broader understanding of the implications of climate change for various species. Scott has a total of 95 peer-reviewed papers, of which 58 have been published since arriving at McMaster.

Andrea Gonzalez, Associate professor in the department of psychiatry and behavioural neurosciences Gonzales is known nationally for her research and leadership studying childhood maltreatment and family violence. Her work has the potential to improve the lives of children, youth and families worldwide.