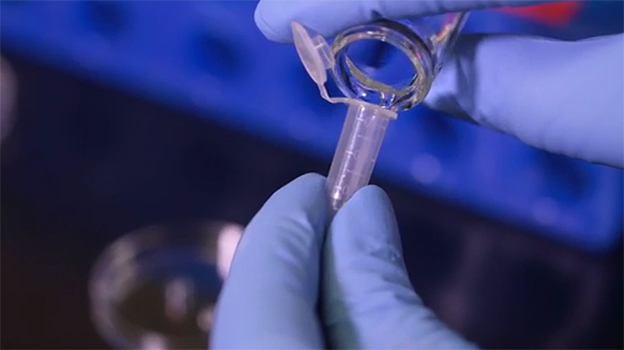 A McMaster team has reduced the sophisticated chemistry required for testing water safety to a simple pill, by adapting technology found in a dissolving breath strip. Want to know if a well is contaminated? Drop a pill in a vial of water and shake vigorously. If the colour changes, there’s the answer.

Inspiration can come in many forms, but this one truly was a breath of fresh air.

A group of McMaster researchers has solved the problem of cumbersome, expensive and painfully slow water-testing by turning the process upside-down.

Instead of shipping water to the lab, they have created a way to take the lab to the water, putting potentially life-saving technology into the hands of everyday people.

The team has reduced the sophisticated chemistry required for testing water safety to a simple pill, by adapting technology found in a dissolving breath strip. Want to know if a well is contaminated? Drop a pill in a vial of water and shake vigorously. If the colour changes, there’s the answer.

The development has the potential to dramatically boost access to quick and affordable testing around the world.

“We got the inspiration from the supermarket,” says Carlos Filipe, a professor of chemical engineering who worked on the project.

The idea occurred to team member Sana Jahanshahi-Anbuhi, a PhD student in Chemical Engineering who came across the breath strips while shopping and realized the same material used in the dissolving strips could have broader applications.

The technology is expected to have significant public health applications for testing water in remote areas and developing countries that lack testing infrastructure, for example.

The researchers have now created a way to store precisely measured amounts of enzymes and other active agents in pills made from the same naturally occurring substance used in breath strips, putting lab-quality science within instant and easy reach of people who need quick answers to questions such as whether their water is safe.

“This is regular chemistry that we know works but is now in pill form,” says John Brennan, director of McMaster’s Biointerfaces Institute, where the work took place. “The user can be anybody in a village somewhere who can take a pill out of a bottle and drop it in water.”

The material, called pullulan, forms a solid when dry, and protects sensitive agents from oxygen and temperature changes that can render them useless within hours. Until now, such agents have had to be stored at extremely cold temperatures and shipped in vials packed in huge chunks of dry ice, at great cost and inconvenience. Using them has been awkward, bulky and often wasteful.

The new method, described in an article published online in the prestigious European chemistry journal Angewandte Chemie, also holds promise for other applications, such as packaging that could change colour if food is spoiled.

“Can you modify packaging so it has a sensor to tell you if your chicken has gone off?” Brennan asks. “The reason that doesn’t exist today is because there’s no way you can keep these agents stable enough.”

The new method allows the same materials to be stored virtually anywhere for months inside tiny pills that dissolve readily in liquid. The pills are inexpensive to produce and anyone can add them to well water, for an instant reading of pesticides, e. coli or metals, for example.

The new technology can easily be scaled up and find its way to market quickly, says Brennan. Pullulan is already approved for wide commercial use and is mass produced, which can speed the journey to market.

The McMaster team includes researchers from the departments of Chemical Engineering, Chemistry & Chemical Biology and Biochemistry and Biomedical Sciences.  The project was funded by the Sentinel Bioactive Paper Network and the Natural Sciences and Engineering Research Council of Canada.