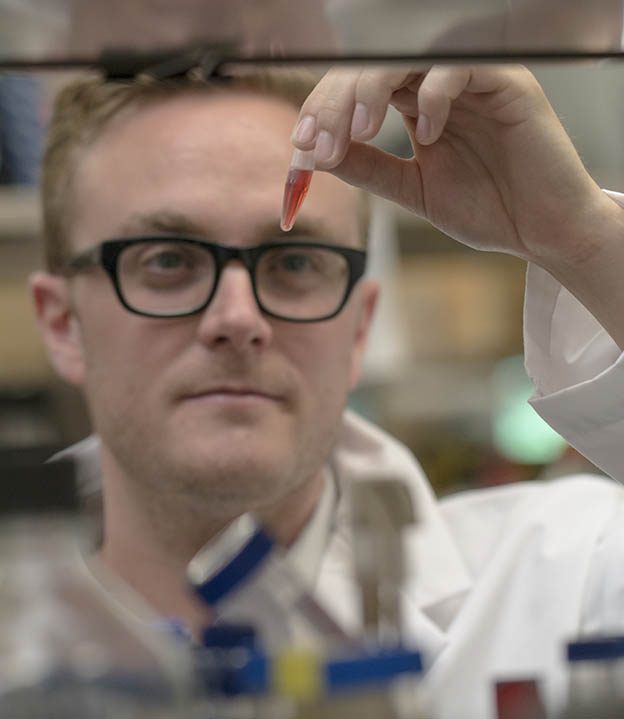 A fungus living in the soils of Nova Scotia could offer new hope in the pressing battle against drug-resistant germs that kill tens of thousands of people every year, including one considered a serious global threat.

A team of researchers led by McMaster has discovered a fungus-derived molecule, known as AMA, which is able to disarm one of the most dangerous antibiotic-resistance genes:  NDM-1 or New Delhi Metallo-beta-Lactamase-1, identified by the World Health Organization as a global public health threat.

“This is public enemy number one,” explains Gerry Wright, director of the Michael G. DeGroote Institute for Infectious Disease Research at McMaster University.

“It came out of nowhere, it has spread everywhere and has basically killed our last resource of antibiotics, the last pill on the shelf, used to treat serious infections,” he says.

Discovering the properties of the fungus-derived molecule is critical because it can provide a means to target and rapidly block the drug-resistant pathogens that render carbapenem antibiotics—a class of drugs similar to penicillin—ineffective.

“Simply put, the molecule knocks out NDM-1 so the antibiotics can do their job,” says Wright.

Seeking an answer to the riddle of resistance in the natural environment is a far more promising approach than trying to discover new antibiotics, a challenge which has perplexed scientists for decades.  No new classes of antibiotics have been discovered since the late 1980s, leaving physicians with very few tools to fight life-threatening infections.

“It came out of nowhere, it has spread everywhere and has basically killed our last resource of antibiotics, the last pill on the shelf, used to treat serious infections.”

“Not only do we have the emergence of an antibiotic resistance gene that is targeting the last drug resource we have left, but it is carried by organisms that cause all sorts of challenging diseases and are multi-drug-resistant already. It has been found not only in clinics but in the environment—in contaminated water in South Asia—which has contributed to its spread over the globe,” explains Wright. “Our thinking was that if we could find a molecule that blocks NDM-1 then these antibiotics would be useful again.”

Wright and his team from McMaster, University of British Columbia and Cardiff University in Wales created a sophisticated screening method to take the NDM-1 gene, combine it with harmless E. coli bacteria and then isolate a molecule capable of stopping NDM-1 in its tracks.

NMD-1 requires zinc to thrive but finding a way to remove zinc from it without causing a toxic effect in humans was a daunting task, until the discovery of the fungal molecule, which appears to perform the job naturally and harmlessly.

Scientists then tested the theory on mice infected with an NDM-1 expressing superbug. The mice that received a combination of the AMA molecule and a carbapenem antibiotic survived, while those that received either an antibiotic or AMA alone to fight the infection did not survive.

“This will solve one aspect of a daunting problem. AMA rescues the activity of carbapenem antibiotics, so instead of having no antibiotics, there will be some,” says Wright. “This is a made-in-Canada solution for a global problem.”

“Antibiotic resistance may be the most urgent and perplexing challenge facing health-care researchers today,” says Dr. John Kelton, dean of the Michael G. DeGroote School of Medicine and vice-president of the Faculty of Health Sciences at McMaster. “This research provides new hope by showing us a completely new way to approach this problem, and none too soon, given the growing risk that superbugs pose to all of us. ”

The findings are published online in the current edition of the journal Nature.

“Antibiotic resistance is one of the top public health concerns in Canada and internationally and it represents a research priority for the Canadian Institutes of Health Research (CIHR). It is exciting to see Canadian researchers finding innovative strategies to overcome antimicrobial resistance,” says Dr. Marc Ouellette, scientific director of the CIHR Institute of Infection and Immunity.

The research was funded in part by the Canadian Institute of Health Research, the Natural Sciences and Engineering Research Council and by Canada Research Chairs in Infectious Disease Pathogenesis and Antibiotic Biochemistry.