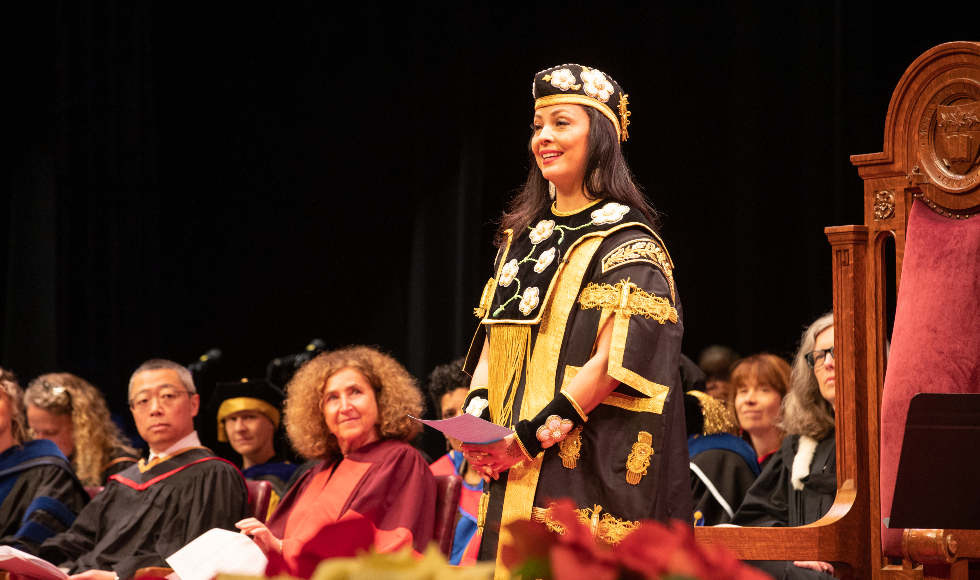 Santee Smith, an internationally recognized artist, dancer and choreographer, was installed as McMaster’s new chancellor at the first of three convocation ceremonies on November 21 and 22.

Smith, who is from the Kahnyen’kehàka (Mohawk) Nation, Turtle Clan from Six Nations of the Grand River, is a two-time McMaster graduate, holding degrees in physical education and psychology along with a Master of Arts in dance from York University. Accompanied by a trio of singers (Jennifer Kerisberg, Benay Elijah and Smith’s daughter, Semiah, a third-year Health Sciences student) Smith donned the ceremonial chancellor’s robe for the first time – a garment that incorporated both the traditions of the office of chancellor and Smith’s own Mohawk and Scottish heritage. “My Haudenosaunee name is Tekaronhiáhkhwa, which means ‘picking up the sky,’” Smith explained in her address to the crowd gathered at the FirstOntario Concert Hall (formerly Hamilton Place).

“As a proud Onkwehon:we – Mohawk woman – and a proud McMaster alumna, I couldn’t be more thrilled to offer my insights. It’s a privilege to be in service to McMaster – upholding the mission and values of the university, and expanding upon the principles of understanding and cooperation of the Haudenosaunee and Mississaugas, on whose land we now stand, work, play, learn and share.” McMaster’s chancellor is the honorary head of the university, presiding over all convocations and participating in a wide range of activities and events. It is McMaster’s tradition to choose alumni who have made significant contributions to society as chancellor.

“I am humbled to be a part of McMaster university in such a significant way, and support the vision of one of the world’s most respected and renowned universities,” said Smith. “Niáwen’ko:wa. Thank you.”