Roll out the stroopwafels: hitchBOT is heading to the Netherlands 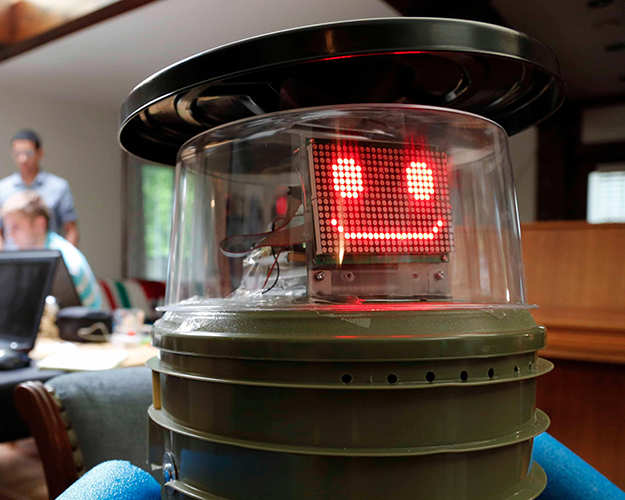 The region of Twente, hitchBOT's destination, is located in the province of Overijssel in the eastern part of the Netherlands. Twente is home to approximately 620,000 people and is a culturally rich and diverse area with 55 museums and 100 galleries and studios.

Canada’s first hitchhiking robot, hitchBOT, will be shining its wellies and packing a suitcase for a vacation in the Netherlands on June 7.

hitchBOT will stay in the region of Twente for three weeks, returning to Canada on June 24.

During its holiday, hitchBOT will be introduced to some of Twente’s most notable arts and culture locations, including the Roombeek area in Enschede, the art villages Diepenheim and Ootmarsum and Twickel Castle.

Following a busy year of hitchhiking and generous invitations to participate in events locally and abroad, hitchBOT is eager for a little vacation in Europe. Its co-creators, McMaster assistant professor David Harris Smith (Communications) and Ryerson researcher Frauke Zeller, are coming along for the ride.

Both Smith and Zeller are looking forward to the robot’s engagement in popular events in Twente, such as the Twente Biënnale, Kunst in het Volkspark or Midzomerfeest Mariënheem.

“hitchBOT has always been an arts and science project,” said the duo. “So we are always delighted when hitchBOT can play a role in promoting art and culture all over the world.”

The region of Twente is located in the province of Overijssel in the eastern part of the Netherlands. Twente is home to approximately 620,000 people and is a culturally rich and diverse area with 55 museums and 100 galleries and studios.

Almost every town and village in Twente has its own summer event, and hitchBOT will have plenty of opportunities to visit them all.

In July and August of 2014, hitchBOT charmed its way across Canada, hitching rides along the TransCanada highway. Earlier this year, it learned German and made its way across Germany where it enjoyed local hospitality, participated in carnival festivities and even went on a bicycle ride.

hitchBOT’s ability to converse with humans is thanks to Cleverscript speech technology, which allows hitchBOT to answer questions about where it comes from or its favourite pastimes. The robot’s co-creators, Zeller and Smith, originally developed the collaborative art and science project to see whether robots could trust humans.

Collaborators on the hitchBOT project include an interdisciplinary team of researchers from the fields of media arts, engineering, computer science and communications.