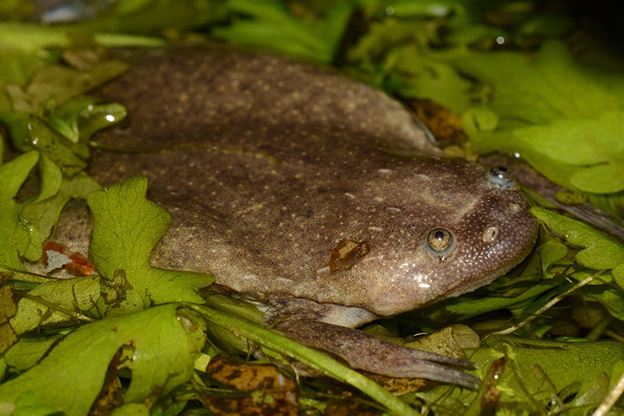 Researchers have discovered half a dozen new species of the African clawed frog, and added back another to the list of known species, in the process uncovering striking new characteristics of one of the most widely studied amphibians in the world.

The discovery increases the number of known clawed frog species from 22 to 29—a 30 per cent increase.

Each of the new species is documented online in the journal PLOS ONE.

“Because the African clawed frog is used as a model organism for biological research, it would be understandable to think that scientists had already pinned down the number of species and other aspects of their diversity such as where they live and how they are related to one another,” says Ben Evans, lead author of the study and an associate professor in the Department of Biology at McMaster University. “But this isn’t the case.”

These clawed frogs, found in west and central sub-Saharan Africa, live in slow moving or stagnant water and are characterized by flattened bodies, vocal organs which can produce sound underwater, and claws on its first three toes.

Researchers were able to tease apart a wealth of information on its evolution with new analytical techniques using DNA, voice recordings, CT scanning of internal anatomy, chromosome analysis and more.

Like most African clawed frogs, researchers found all are “polyploid”, meaning their DNA doubled during evolution, giving them a redundant copy of every gene. Genome duplication occurred several times in some of the species and two of the new ones are “dodecaploid”, because their genomes were duplicated a remarkable six times.

“For biodiversity conservation, it is paramount that we understand how much diversity there is and where it occurs,” says Evans. “This is particularly crucial in the tropics, where global biodiversity is highest and in groups of organisms that have subtle physical differences between species and in which species diversity is therefore “cryptic”.”

His team will travel to Ghana next year to gather further genetic data and search for what Evans calls “lost ancestors” of the clawed frog. These “lost ancestors” are species predicted to have existed in the past whose genomes became part of those of the polyploid species that exist today.