Research in the Land of Fire and Ice 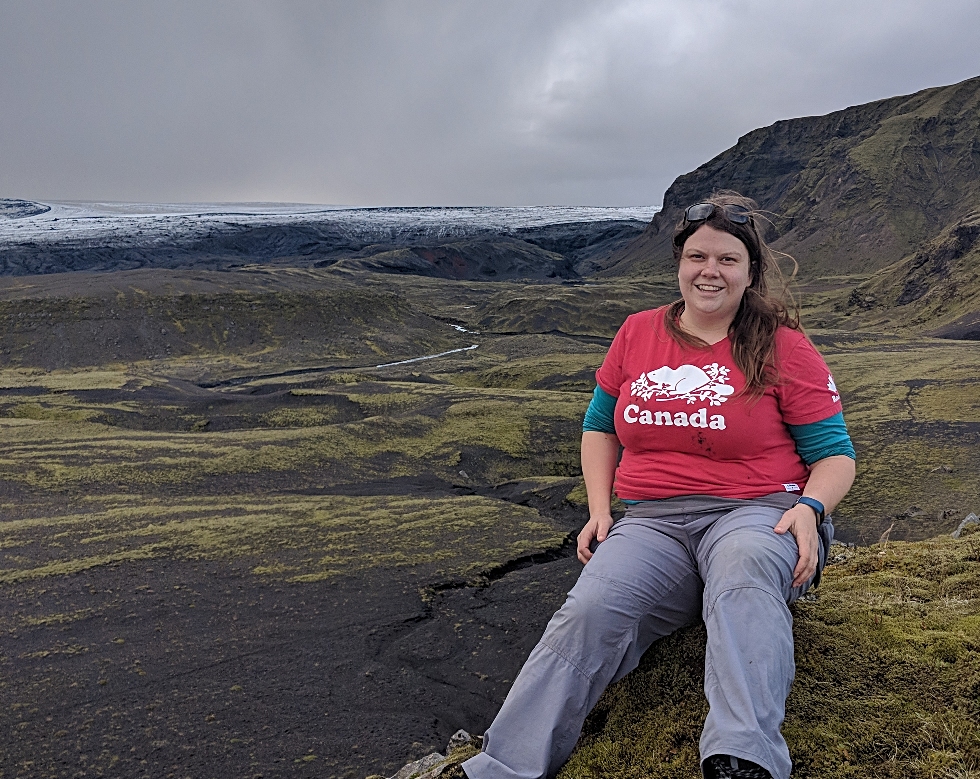 While most of her time is spent analyzing data in Burke Science Building, Rebecca Lee was recently in Iceland, collecting field data for her PhD research. As part of the Glacial Sedimentology Lab, led by Dr. Carolyn Eyles, she spent two weeks in southern Iceland this past August looking at the sediments and landforms produced by Icelandic Glaciers.

Hello! My name is Rebecca Lee and I’m a PhD student in Earth and Environmental Sciences in the School of Geography and Earth Sciences. This August myself and Rodrigo Narro Perez, a member of my research lab, went to southern Iceland to investigate the landforms and sediments left by glaciers to better understand how glaciers are reacting to climate change.

What is Glacial Sedimentology?

The Glacial Sedimentology Lab is interested in the study of sediments that have been deposited or moved by glacial processes. The size, location, and the structure of these sediments can give insight into what processes were responsible for their deposition and when deposition occurred. We use this information to help understand past environments, how glaciers advance and retreat over time, and to help predict what may occur in the future.

Understanding how changing climatic is affecting today’s glaciers is of utmost importance, particularly for communities dependent upon glacial meltwater as a potable water source. In addition, much of the Canadian landscape was created by glacial processes as huge ice sheets advanced over northern North America repeatedly during the past approximate 2 million years. All major cities are underlain by glacial sediments and we need to understand the origins and characteristics of these materials in order to build safe structures, prevent erosion along rivers and lakeshores, find resources such as precious minerals and aggregates, and locate and protect groundwater resources.

While there are glaciers in other parts of the world, Iceland is an important area to study for many reasons. Iceland has very well documented historical record of the position of glacier margins and a large amount of satellite data from the early 20th century, meaning that we have lots of information on how the glaciers have changed over time. This information can be related to the sediments and landforms that we are seeing at present and help us understand how the glacier changes are recorded in the sediment. Some of my research focuses on Iceland, however, we are also interested in the glacial sediments found here in southern Ontario and understanding these deposits as well.

Many Icelandic glaciers lie close to sea level and terminate on open plains, unlike many other glaciers, such as those in the Rockies, which are found at high elevations and in mountain valleys. Different factors impact how the glaciers react to climatic variation in each setting, and the Icelandic glaciers may be affected by similar climatic and environmental factors to those that affected southern Ontario during the last glaciation (around 20,000 years ago!). This allows us to apply our Iceland research to the sediments that we have in southern Ontario in order to understand our geological history too!

We focused on two surging glaciers in Iceland, Slettjökull, and Öldufellsjökull, which are glaciers that are subject to episodes of extremely rapid movement, up to several kilometers in one year. These glaciers react differently to climatic fluctuations than more slowly moving glaciers and it is probable that areas of southern Ontario were impacted by similar rapidly moving ice streams in the past.

Though many of the Icelandic glaciers are readily accessible, it can be difficult or impossible to get to some areas of interest, such as extremely steep outcrop faces. During this past field season, we used a drone to help us collect data from inaccessible areas, and also to collect high-resolution aerial imagery of interesting parts of the landscape. Drones have become an integral part of field research programs in many disciplinary areas as they allow rapid and high-resolution data collection in formerly inaccessible regions.

How important is field work in the earth and environmental sciences?

Understanding the processes at work in our natural environment has always fascinated me and is one of the main reasons I chose this field of study. But to be honest, I hold field work as one of the main attractions of doing this type of science. The ability to use the outdoors as our laboratory is incredible and being able to explore different places around the globe has always appealed to me. Earth and environmental scientists observe and collect data from the outdoors to understand the processes occurring in our natural environment both in the present and the past.

Being out in the field is a learning experience unto itself. Learning about glaciers in the classroom is one thing, but seeing the landforms we learn about in class while walking on top of a glacier, is a completely different type of learning.

Fieldwork is not all just fun and games — one of the most important things when doing fieldwork involves being adequately prepared to conduct research safely. Doing fieldwork in places such as Iceland, one has to be prepared for the possibility of anything, it is the land of fire and ice after all. The volcano Katla lies underneath the Mýrdalsjökull ice cap and is stated to be ready to explode soon; and while Iceland may be prepared for it, ensuring that we know how to deal with an event such as this is important.

Why did I go into the Earth and Environmental Sciences?

I went into this because I had great mentors that I could rely on, in particular, Dr. John Maclachlan and Dr. Carolyn Eyles. Dr. Eyles has been a great role model in geology who not only taught me a lot but is also a woman in a heavily male-dominated discipline. They have provided me with endless advice, guidance, and have supported all my projects. Having incredible mentors like Dr. Eyles and Dr. Maclachlan has made my time in graduate school an incredible learning experience.