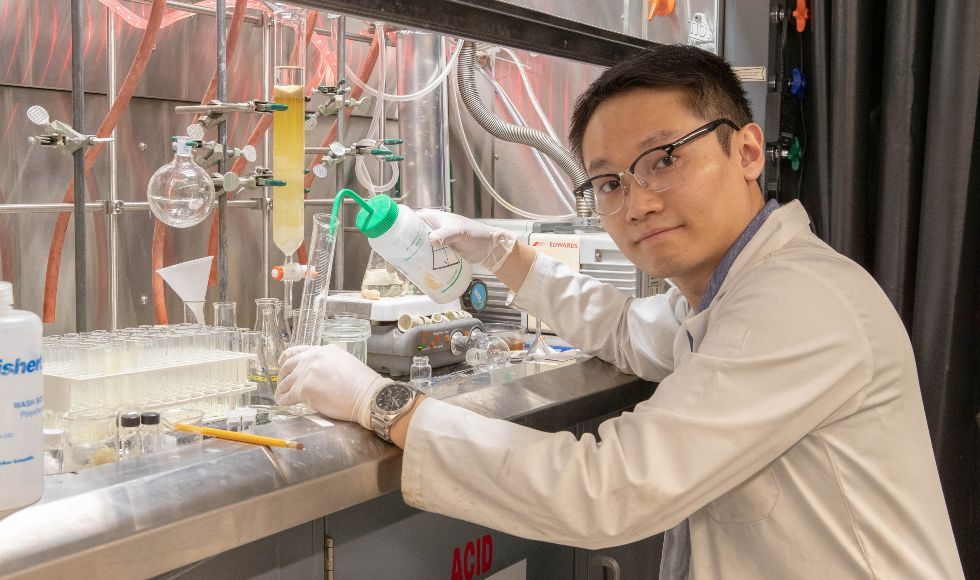 Peter Ho, a PhD candidate in chemistry, sits in the newly renovated labs in the Arthur Bourns Building.

Filomena Tassi, minister of seniors and MPP for Hamilton West-Ancaster-Dundas, was on-hand to mark the completion at a short ceremony on April 18.

“Our investments in McMaster University have helped to make McMaster one of Canada’s most research-intensive universities,” said Tassi. “The improvements to the Arthur Bourns Building will help students and researchers advance innovation in our community and across Canada.”

The project marked the largest government investment in laboratories and research capacity in the university’s history, with contributions from both the federal and provincial governments as well as Ontario’s Independent Electricity System Operator.

Through its Postsecondary Institutions Strategic Investment Fund, the federal government contributed $37.5 million, while the Government of Ontario provided $5.5 million. The university itself invested $24.3 million, and the IESO gave a further $7.6 million, for a total of $75 million.

Along with the new addition, the project involved extensive renovations to existing spaces and completing deferred maintenance projects. The addition was built to LEED-Silver specifications.

“McMaster is creating a brighter world through its research, teaching and local and global impact,” said McMaster President Patrick Deane. “These amazing new labs and spaces mean our students and researchers will be able to work together in new ways to find answers to the critically important issues facing Canada and our world. Our sincerest thanks to the Government of Canada and the Government of Ontario for their outstanding support in making this happen.”