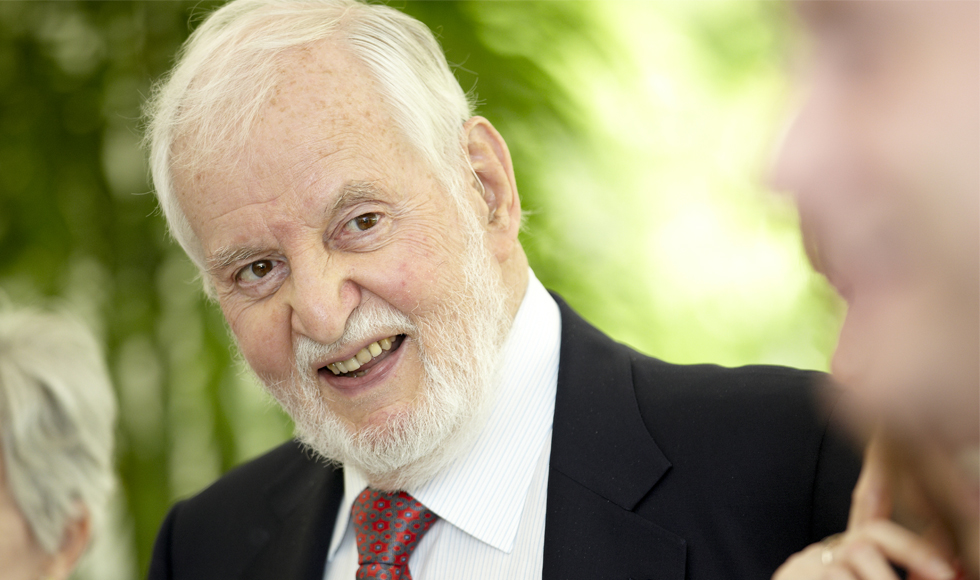 Passionate about all things McMaster.

Alumnus Bob Fitzhenry ’54 is being remembered for his unbridled enthusiasm and belief in all aspects of McMaster University whether it entailed leading-edge research labs, academic excellence, athletic supremacy or artistic creation. Fitzhenry, 89, died July 16.

Fitz, as he was affectionately known, made an impact on the McMaster community almost from the moment he stepped on campus in 1950 as a student of political economy. He was a Marauder football team member and letterman, while also involved in various arts and science clubs and activities. After graduation, his dedication to McMaster continued when he served on the McMaster Alumni Association board and as association president from 1974-75. He served as a volunteer cabinet member for The Campaign for McMaster University from 2006 to 2010. In 2009, he was awarded an honorary degree from McMaster.

“Mr. Fitzhenry exemplified leadership and was committed to championing McMaster wherever he could,” said David Farrar, McMaster’s acting president and vice-chancellor. “He cared deeply about our students and creating opportunities for them to thrive and learn to be leaders, in the lecture hall, in the gym or on an athletic field, and his interests in fostering rich environments for research can be seen across our campus. He will be greatly missed.”

As an entrepreneur, Fitzhenry excelled in business, partnering with Robert Beamish in the 1970s to build the Woodbridge Foam Corporation into a world-class company in the international high-tech manufacturing sector.

“Bob loved McMaster and we loved him,” said Mary Williams, McMaster’s vice-president of University Advancement. “He was a humble, caring gentleman, who had a wonderful smile and a twinkle in his eye. He was passionate about this university and we are so grateful for his friendship and insights shared over decades, and for his unwavering cheering from the sidelines for all things McMaster.”

Fitzhenry was an exceptional benefactor to McMaster, and with the Fitzhenry Family Foundation, invested in student success with bursaries and championed student-athletes in their pursuits with support for top-notch athletic and fitness training facilities on campus. Fitzhenry’s passion for Marauder football was renowned as he was a regular spectator at fall varsity games throughout the years.

His belief in the power of research spurred on support for the Robert E. Fitzhenry Vector Laboratory, which provides the delivery of agents used to transport gene therapies or vaccines in patients, and the Robert Fitzhenry Specialized Rehabilitation and Exercise Lab, a one-of-a-kind exercise centre for people living with a spinal cord injury. In 2013, his gift in tribute to his late wife, Andrée, transformed the teaching and experiential learning environment for studio arts students with the creation of the Dr. Robert & Andrée Rhéaume Fitzhenry Studios and Atrium.

On Mon. July 22, McMaster’s flags are lowered to half mast in recognition of Fits’s remarkable life and many contributions to his university.

Faces of COVID humanizes the pandemic by collecting accounts by frontline workers in the COVID-19 pandemic, both in health care and otherwise.