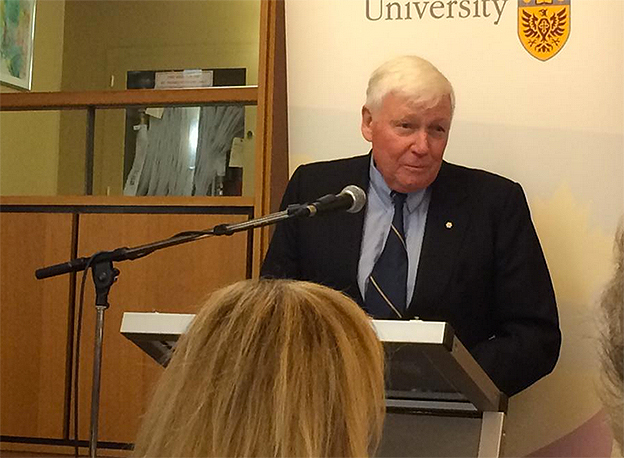 Lynton 'Red' Wilson speaks to friends and members of the McMaster community Tuesday after announcing a new gift in support of the Wilson Institute for Canadian History.

Red Wilson’s latest gift to McMaster – $2.5 million – is a catalyst for revitalizing the study and promotion of Canadian history, an area where Wilson has established himself as a champion.

The gift from the Wilson Foundation, announced today, supports the renewal of the L.R. Wilson Institute for Canadian History, ultimately allowing more Canadians to learn new stories about their past, says Wilson, a graduate, recipient of an honorary doctorate and former chancellor of McMaster. His philanthropy has included major contributions to the liberal arts at McMaster and to the study of history in Canada.

“A liberal education helps prepare young men and women for leadership,” Wilson says.  “A key component of the liberal arts, the study of Canadian history, equips us all to better understand the context of the experiences, choices and decisions we face every day. In its just five years, under the leadership of Professor Viv Nelles, the Wilson Institute has already made a remarkable contribution to the reinvigoration of Canadian history at McMaster. It is based on this success that the Wilson Foundation is renewing its support today.”

Wilson’s newest gift to McMaster will fund the renewal of the Wilson Institute after its first five-year mandate, providing resources to support the recruitment of a new director, a new cohort of post-doctoral fellows and to fund speakers and research projects. Nelles is set to retire at the completion of his five-year term.

The Wilson Institute will have a new home in L.R. Wilson Hall, the new liberal arts complex now under construction, for which Wilson made a $10-million gift in 2007.

“Red’s generosity and his advocacy for the importance of the liberal arts have invigorated not just our Department of History, but our entire Faculty of Humanities,” says McMaster president Patrick Deane. “His belief and support are inspiring others, and attracting others, and I am confident that we will look back decades from now at his philanthropy and recognize it as a watershed in the development of our liberal arts faculties.”

The initial success of the institute is having an impact at McMaster and beyond, says McMaster’s Dean of Humanities, Ken Cruikshank.

“The L.R. Wilson Institute for Canadian History has built the reputation of McMaster as the place where young scholars go to think about Canadian history in new and exciting ways,” Cruikshank says. “McMaster is also the place where established scholars gather to think through critical issues – to think about how the past can inform our thinking about current challenges facing Canada and the world.”

The investment announced today reinforces the importance of Canadian history at a critical time in the field, say the prominent young historians who have benefited from their fellowships at the institute.

“I don’t know of any other institute in Canada that supports research and teaching in Canadian history to this extent,” says Jennifer Bonnell, an environmental historian who has recently published a history of the Don River Valley in Toronto. “I have the opportunity to be a member of one of the best Canadian history departments in the country.”

Being a Wilson fellow has allowed Colin McCullough to take a closer look at the origins of Canada’s peacemaking tradition, to understand where ideas formed and took shape. Through specific research, Canada’s broader story emerges, he says.

“Studying history allows us to ask questions,” he says. “We have to try to encourage people not only to gather information, but to use it to think critically about the present and the future.”

“If it weren’t for an opportunity like this, these stories wouldn’t be told,” Mosby says.