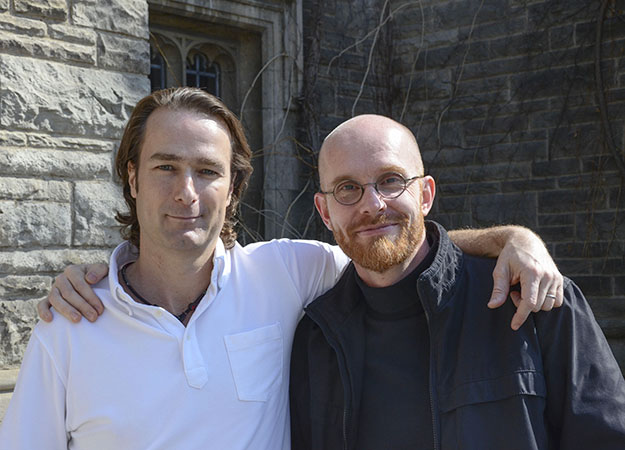 Mark Rowe (left) and Anders Runesson, friends and colleagues in the Department of Religious Studies, will compete in the upcoming 'Tough Mudder' competition at Mount St. Louis Moonstone ski resort in Coldwater, Ont.

A pair of religious studies scholars in the Faculty of Social Sciences say completing a 10-12-mile obstacle course designed by British Special Forces isn’t much different than doing research.

“We’re treating it like a hypothesis,” jokes Rowe. “Unlike other hypotheses, this one will be tested in ice water, barbed wire, fire and electricity.”

“It’s a scholarly thing to do,” adds Runesson. “Sitting at a computer for 12-hours straight isn’t that much different. You are testing your mental ability.”

It’s a unique approach to an event that involves a number of extreme activities, such as swimming through large wooden crates of ice-filled water and running through a field of electric wires and blazing piles of straw.

It’s not the first time the two have teamed up to push their physical limits. In 2007, they trained for and completed Hamilton’s Road2Hope Marathon. They’ve also run in Hamilton’s iconic Around the Bay Road Race and several other events, and encourage all students and scholars to keep physically active.

“Once you run a marathon or Around the Bay, you feel like you can do anything,” says Rowe, who also enjoys spending his summers climbing the highest peaks in Japan.

For Tough Mudder, however, the two admit they’ll rely on the strength of each other to complete the gruelling course. They’re also looking forward to the complimentary post-event refreshments.

Completed or otherwise, the race is ultimately about having fun.

“If we die, we die as scholars,” declares Runesson with a smile.