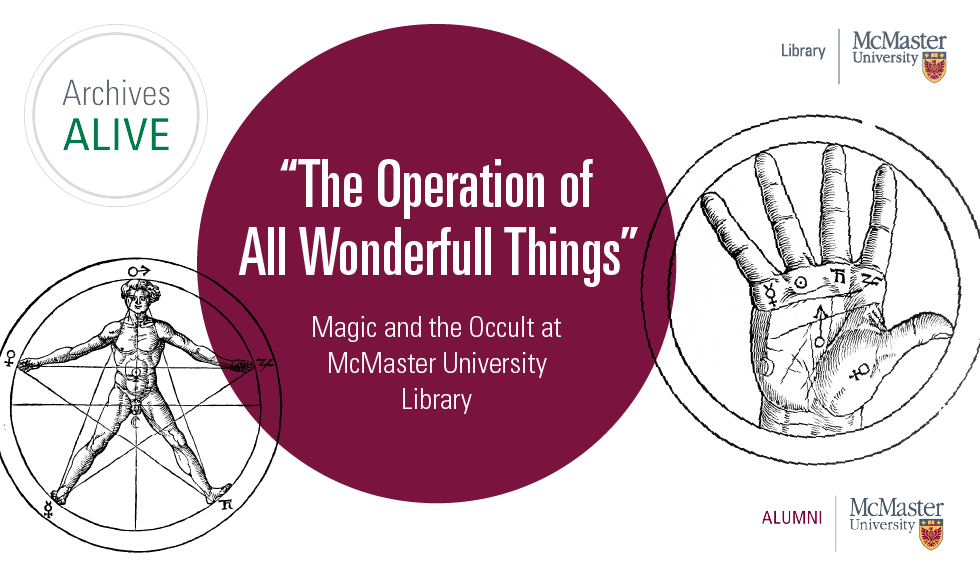 This month’s must-see Archives Alive event will take audiences back in time to explore rare texts at McMaster University rooted in the very real tradition of magic and philosophy in western Europe.

Leather-bound books with ancient alphabets, pentagrams outlined in red paint on a floor, and hooded figures chanting incantations by candlelight; these are among the depictions commonly conjured in popular culture around magic and the occult.

But where do these concepts come from?

This month’s must-see Archives Alive event will take audiences back in time to explore rare texts at McMaster University rooted in the very real tradition of magic and philosophy in western Europe.

The virtual talk, entitled, “The Operation of All Wonderfull Things:” Magic and the Occult at McMaster University Library, is on Thursday, Oct. 28 at 1 p.m.

“Here at McMaster, we have some of the original source materials from which those popular depictions take their inspiration,” said presenter Myron Groover, archives and rare books librarian at McMaster University Library’s William Ready Division of Archives and Research Collections. “Fictional depictions of occultism are inspired by the real thing — an extensive philosophical and practical literature of magic in the Western esoteric tradition.”

Among the texts that will be featured during the event is one of only six known manuscripts of the Liber Visionum — a beguiling medieval synthesis of demonology and Marianism.

Groover says that although the text looks benign to our eyes today, it was so controversial that it was officially suppressed in 1323.

“The work itself seems to be a series of complicated prayers or rituals that you undertake to attain a state of mystical and philosophical union with the Virgin Mary. Through doing so, the idea is that you would have access in your personal life to the Virgin’s infinite wisdom and compassion,” he said.

“The reason it is controversial is that it papers over an earlier medieval occult tradition that was entirely demonological in nature. It was a way of sanitizing a practice that was originally about manifesting, summoning, and communicating with demons in order to make it politically correct within the religious atmosphere of the day.”

Another book that will be highlighted is an obscure 19th century copy of the Lesser Key of Solomon.

“This is a stereotypical-looking occult book, with many summoning pentacles and symbols,” said Groover. “What makes our copy significant is that it is quite heavily annotated. This could mean that someone who was studying and quite possibly practising the occult arts has read this as a practical textbook and has gone through it in pencil and made certain cross-references, correlations, and in some cases, corrections to the text, which is quite fascinating.”

Perhaps one of the texts Groover is most excited to share is a recently acquired first edition of Agrippa’s Three Books of Occult Philosophy dating from the 1530s.

“Agrippa is inspired by the period in which he’s alive, but he uses this inspiration to pull together the whole esoteric tradition which he believes is derived from classical antiquity,” said Groover. “It’s a very influential synthesis and something from which practitioners today still read and quote.”

In addition to delving into the rare texts, Groover will connect the dots to references in modern popular culture, making the event appealing to a wide audience.

“Anyone who has ever enjoyed TV shows like Supernatural or thought Giles from Buffy the Vampire Slayer was cool should definitely tune in to this event,” he said.

All are welcome to attend. Admission is free.

Archives Alive showcases the unique holdings of McMaster University Library’s William Ready Division of Archives and Research Collections. A wealth of resources exist which will delight and inform, from rare books created before 1800 to contemporary writers’ archives. Recognizing that archives can feel intimidating, these talks allow staff and researchers to share their knowledge with the community and introduce collection items housed within the library. Archives Alive is presented by McMaster University Library and McMaster Alumni.