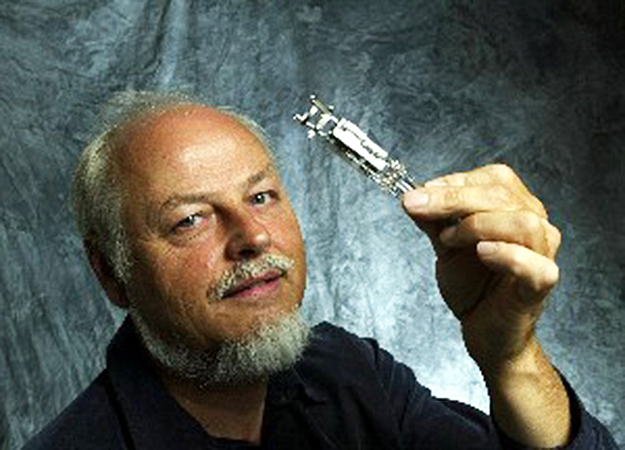 Adam Hitchcock, a professor in the Department of Chemistry, is leading a project called 'Enhancing the Spectromicroscopy Beamline and Endstations at the Canadian Light Source.'

A pair of McMaster researchers, Adam Hitchcock and Bruce Gaulin, are the latest beneficiaries of an Ontario Research Fund: Research Infrastructure investment.

The announcement matches funding delivered in January through the Canada Foundation for Innovation.

“Ontario’s world-class research teams are equipped to make important discoveries in health, energy and advanced manufacturing,” says Reza Moridi, minister of Research and Innovation. “The cutting-edge research taking place in south central Ontario will not only strengthen the province’s economy, it will strengthen our quality of life.”

Roughly $300,000 of the ORF funding will focus on an upgrade to beamline and end stations at the Canadian Light Source (Saskatoon), which Hitchcock and other Ontario university researchers use regularly.

Hitchcock, a professor in the Department of Chemistry, is leading a project called, “Enhancing the Spectromicroscopy Beamline and Endstations at the Canadian Light Source,” supported by the latest round of the ORF funding. According to Hitchcock, a proposed infrastructure upgrade a the Canadian Light Source is “critical to significantly improving performance and adding new, unique capabilities, critical for planned research.”

Experimental condensed matter physicist Bruce Gaulin, director of the Brockhouse Institute and leader of the ORF-funded project “Small Angle Neutron Scattering (SANS) for Advanced Characterization of Nanostructure in Materials,” explains that neutrons are scarce resources within Canada and internationally. In Canada, only McMaster’s nuclear reactor and the NRU reactor in Chalk River are capable of supporting such an advanced program.

Back in January, researchers from McMaster’s Brockhouse Institute for Material Research were awarded more than $3 million by the Canada Foundation for Innovation to establish Canada’s first Small Angle Neutron Scattering (SANS) instrument. The same amount will be awarded through the ORF.

“It is truly a unique opportunity,” says Gaulin, who also holds the Brockhouse Chair in the Physics of Materials. “McMaster is going to be providing the Canadian materials science community with a powerful instrument to probe the structure of materials on the nanoscale. Materials scientists in Canada are not presently competing on a level playing field with scientists from other technology-driven economies. This infrastructure will allow them to better compete to win.”

Small angle neutron scattering exploits the unique properties of the neutron as a probe of matter. The materials that will be explored by McMaster’s SANS instrument will have sub-structures with a characteristic size of about one nanometer, or one billionth of a meter.

“The SANS instrument will be a powerful vehicle for the creation of knowledge about innovative plastics and polymers, unique biomaterials and novel magnetic and superconducting materials,” says Mo Elbestawi, vice-president, Research and International Affairs. “SANS will greatly increase our capacity to train our students in forefront materials characterization and will bring together academic, industry and government scientists and engineers from around the world for multi and interdisciplinary collaborations to solve problems related to materials in energy, communications, human health, and the environment.”

Of the 13 Ontario universities awarded funding from the CFI’s Leading Edge Fund in January, McMaster had the fourth largest project award. The CFI’s $3 million represents approximately 40 per cent of the total project cost of $7.55 million, with the balance contributed by the provincial government, the University and other industry partners.