Prescription painkillers a source of addiction for many women 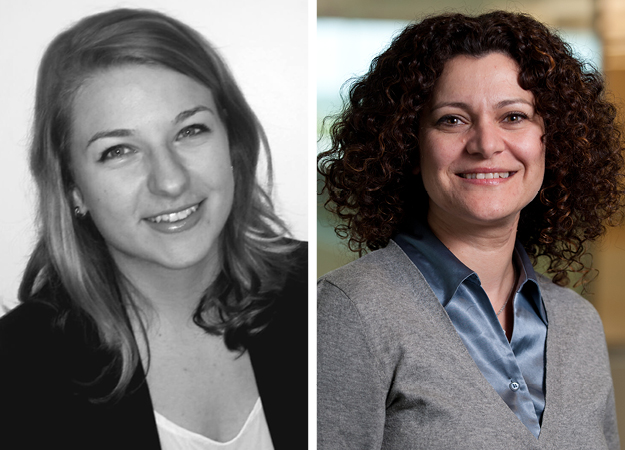 'Most methadone treatment is based on studies with few or no women at all. We found men and women who are addicted to opioids have very different demographics and health needs, and we need to better reflect this in the treatment options that are available,' said Monica Bawor (left), first author of the paper and a recent PhD neuroscience graduate of McMaster. Dr. Zena Samaan (right) was senior author of the paper.

Painkillers prescribed by doctors are the starting point for an opioid addiction for more than half of female methadone clinic patients, says a new study led by McMaster researchers.

These women also need different treatment from men with addiction, the team found.

The results, published in the open access journal Biology of Sex Differences Monday, show that more than 52 per cent of women and 38 per cent of men reported doctor-prescribed painkillers as their first contact with opioid drugs.

The latter is a family of drugs which include prescription medicines such as OxyContin and codeine, as well as illicit drugs such as heroin.

The study of 503 patients attending Ontario methadone clinics identified significant gender differences between the men and women attending the clinics. Compared to men, women were found to have more physical and psychological health problems, more childcare responsibilities, and were more likely to have a family history of psychiatric illness.

Men were more likely than women to be working and more likely to smoke cigarettes. Rates of cannabis use were relatively high (47 per cent) among both men and women.

“Most methadone treatment is based on studies with few or no women at all. We found men and women who are addicted to opioids have very different demographics and health needs, and we need to better reflect this in the treatment options that are available,” said Monica Bawor, first author of the paper and a recent PhD neuroscience graduate of McMaster.

“A rising number of women are seeking treatment for opioid addiction in Canada and other countries yet, in many cases, treatment is still geared towards a patient profile that is decades out of date – predominantly young men injecting heroin, and with few family or employment responsibilities.”

The study highlights the changing profile of people addicted to opioids.  Compared to results from studies in the 1990s, the average age of patients being treated for opioid addiction is older (38 compared to 25 years), with opioid use starting at a later age (25 rather than 21 years).

Injecting drug use has reduced by 60 per cent, and there has been a 50 per cent reduction in rates of HIV in opioid users as a result.

At the same time, there has been a 30 per cent increase in the number of patients becoming addicted to opioids through doctor-prescribed painkillers, usually for chronic pain management.

In Canada, the number of opioid painkiller prescriptions has doubled in the last two decades, and according to the World Health Organization (WHO), Canada consumes more opioid painkillers than any other country.

Senior author Dr. Zena Samaan added that the reasons are not clear why women are disproportionately affected by opioid dependence originating from prescription painkillers.

“It may be that they are prescribed painkillers more often because of a lower pain threshold or because they are more likely to seek medical care than men,” said Samaan, an associate professor of psychiatry and behavioural neurosciences at the Michael G. DeGroote School of Medicine.

“For whatever reason, this is a growing problem in Canada and in other countries, such as the U.S., and addiction treatment programs need to adapt to the changing profile of opioid addiction.”

Major funding for the study was from the Canadian Institutes for Health Research.