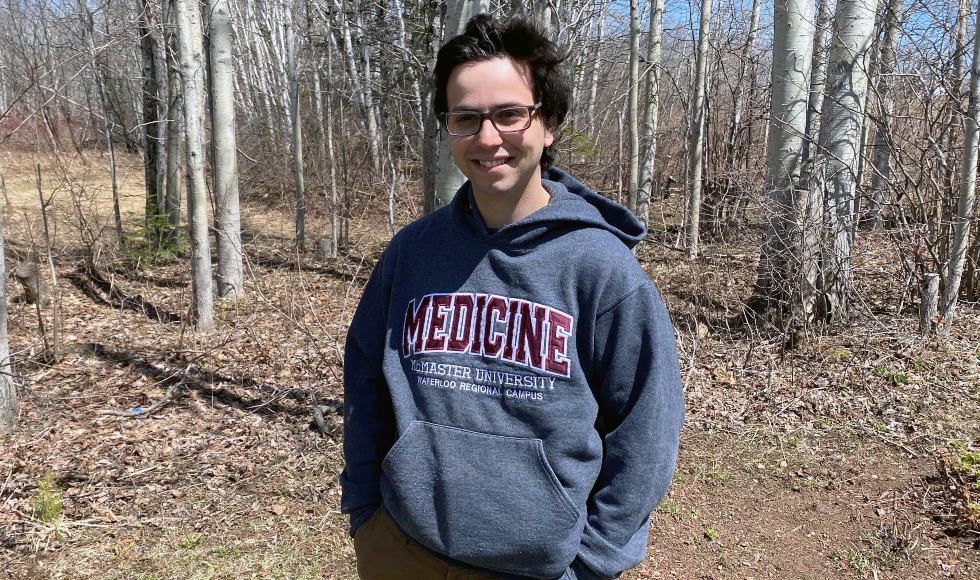 Tyler Pitre is continuing at the Waterloo Regional Campus of McMaster University’s Michael G. DeGroote School of Medicine for his internal medicine residency.

Tyler Pitre grew up in a small community of about 100 people in northern New Brunswick. His family did not have much, but they were a close knit group who always looked on the bright side.

This week, despite numerous obstacles and tragedy, Pitre is graduating with a medical degree from McMaster University’s Michael G. DeGroote School of Medicine. He is continuing at the Waterloo Regional Campus of the medical school for his residency in internal medicine.

Pitre hails from Nash Creek, located more than 300 kilometres north of the province’s capital of Fredericton. Father Arthur LaPointe worked in a factory, while his mother, Tammy Carrier, had left high school before graduating but returned to college later in life to become a nurse.

Pitre headed to the University of New Brunswick, becoming the first person in his immediate family to attend university.

“I grew up in a really poor family, so the idea of becoming a doctor as I was growing up was just not in the cards,” he said. “I didn’t have a clear career path after high school, but I was interested in learning how to think and in big ideas.”

He earned a bachelor of arts degree in philosophy and mathematics, but his father wouldn’t see him graduate as he passed away in 2010 at age 44 from lung cancer.

Although he didn’t know it then, it was the interaction with his father’s doctor, and the importance of the doctor to their family, that would draw Pitre to medicine.

On a scholarship, Pitre earned a master’s degree in philosophy and bioethics from Western University. He applied to medical schools in the Maritimes, and was disheartened when he was waitlisted.

Although rejection was difficult, Pitre refused to let it define him. He rallied to fill in the gaps in his knowledge, and was accepted to both law school out east and medical school at McMaster the following year.

Pitre took his acceptance seriously, taking advantage of every opportunity that the tight-knit Waterloo campus and training ground of Grand River Hospital had to offer. During medical school, he led three research projects to publication and published two case reports. Pitre took the time to mentor other medical students by leading study groups as well as heading up a team writing a chapter on infectious diseases for the McMaster Medical Compendium initiative.

Tragedy would strike the family when his older brother, Jacob Pitre, died in 2018 of cardiac arrest at age 27. But Pitre continued on.

“The most meaningful aspect of the many accomplishments of Tyler is his leadership style,” said Margo Mountjoy, regional assistant dean of the Waterloo Regional Campus of the Michael G. DeGroote School of Medicine.

“While Tyler’s scholarly activities and academic success are exemplary, it is the way that he accomplishes these that is most impressive.

“Tyler is compassionate and thoughtful. I look forward to watching him influence and drive positive change in the field of medicine in his career.”

Pitre is grateful for his experience at the Waterloo Regional Campus.

“The relationships I built in Waterloo are amazing,” he said. “My medical experience at Waterloo gave me unparalleled access to medical professions and mentors. A few months into medical school, I was already in the hospital being mentored by extremely talented internists. They took me under their wing, gave me research projects and pushed me to be better.

“I felt like I had my own personal medical school experience and I could make it the way I wanted and do the things I wanted to do.”

In being selected for his internal medicine residency, Pitre was invited to interview at medical schools across the country, but the people of the Waterloo Regional Campus were what inspired him to stay.

He anticipates pursuing the subspecialties of either oncology or nephrology.

Pitre is grateful for his best friend, Marie-Gabrielle Turcotte, who he credits as being integral to his journey.

And with the support of his mom and sister, Mattea, Pitre will apply the lessons his family has taught him to his career in medicine.

“My family had a very stoic attitude about bad things happening,” he said.

“When I was a kid, we didn’t have a lot of anything, but my family had this attitude that the day was still beautiful regardless of how bad things seemed.

“That attitude has always been helpful, because no matter what happens, I feel like I can find something good there.”

McMaster’s spring convocations will be held on the same days as scheduled but, because of the COVID-19 pandemic, graduands will be receiving a personalized video and entrance into a website with video greetings from university officials. In-person celebrations will be scheduled later.