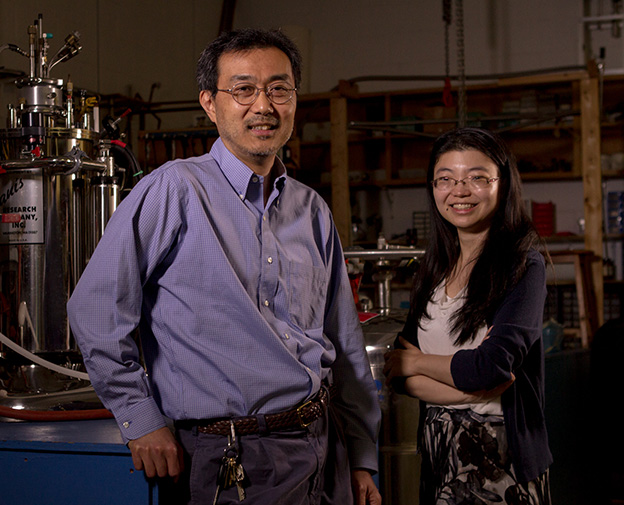 Takashi Imai has managed to crack a mystery of matter that has eluded other top physicists, even Nobel winners, for decades.

The physics professor and a talented graduate student, Mingxuan Fu, have established that an elusive form of matter, known as “spin liquid”, previously known only in theory, does in fact exist.

They completed their experiments in a McMaster lab with materials provided by US colleagues.

The term “spin liquid” relates to the electrons belonging to the atoms of a manufactured crystal. When super-cooled to -272 C and subjected to a magnetic pull 60,000 times stronger than the Earth’s magnetic field, the electrons refuse to line up in predictable patterns.

Instead of forming up in known patterns, the electrons, which typically settle in opposing pairs as magnets do, continue trying to resolve unmatched pairs, and do not make the transition to a frozen state.

They trade partners constantly, resulting in an unresolved “liquid” state, an elusive state of matter that for more than 40 years has only been imagined on paper and which has been the subject of hundreds of scientific papers.

The research, recently published in the journal Science, answers a complex question of condensed-matter physics and represents a career high for Imai, who has been working on the problem for nine years, sometimes sleeping on a couch in his lab to babysit his experiments, using nuclear magnetic resonance imaging to search for the elusive prize, and finally finding it in a particular orientation of specialized crystals manufactured by colleagues at Stanford, MIT and the University of Chicago.

After experimenting with numerous combinations of crystals, magnetization, temperatures and angles of observation, the magic moment came in August 2014.

“With every data point we measured, we did a high five,” Imai says.

The discovery was followed by more than a year of work to get the paper written and published.

Confirming that spin-liquid does exist will not save lives or earn money on its own, Imai says, but it is an important achievement in pure science that allows other research to proceed, and could one day lead to other discoveries with practical applications.