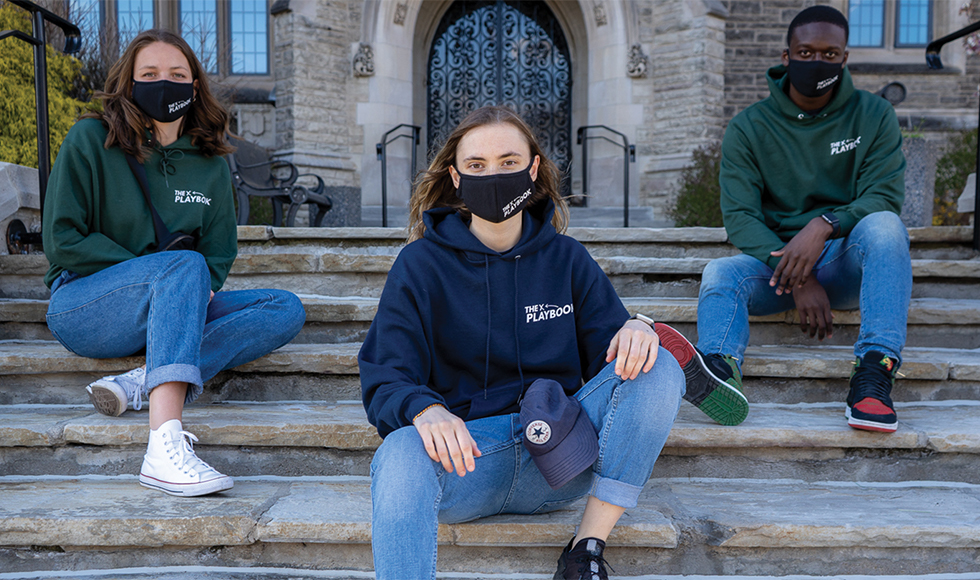 Wake up, go to sports practice, attend classes, do homework, sleep, repeat. What happens when your routine goes from that to, well, not being your routine anymore? To help ease the transition from post-secondary athletics to what’s next, a group of student-athletes have teamed up to create a networking initiative called The Playbook.

“There’s a gap that exists between the support you receive as a student-athlete, and a lack of preparation for life after graduation when you leave the world of sports,” says founder of The Playbook, Briana Wice.

Wice recently graduated from McMaster’s kinesiology program and is now attending the Ontario College of Health and Technology. As a Mac student, she played field hockey and soon became captain of the team. She was also co-president of McMaster’s Varsity Leadership Committee.

“The Playbook acts as a bridge between students and employers to help present opportunities either while they are still a student or once they graduate.”

The Playbook was developed through many conversations across the student-athlete community in Canada. Each conversation revealed common feelings of being underprepared for careers after leaving the sports arena. With representation from across several post-secondary institutions, The Playbook provides resources that draw on the membership’s first-hand experiences.

The Playbook’s leadership team, which includes McMaster athletics community members and alumni, has partnered with work experience platforms such as The Graduate Network, The ONYX Initiative and Post Game Professions, in order to operate as a pipeline to job recruiters.

“The feedback we’ve received has been positive and encouraging,” says Muad Issa, an advisor for The Playbook and current team member within McMaster’s athletics and recreation department.

“The world of sports becomes a student’s identity while attending university, but they want their legacy to be the work they go on to do off the field in their careers. The Playbook helps guide them towards that.”

The Playbook’s private LinkedIn page connects student-athletes with people who have shared experiences and who can provide mentorship for career paths. The initiative also offers two podcasts, The Playbook Podcast and Safe Space.

Payton Shank, the creator behind Safe Space, is a student within the Faculty of Science and a member of McMaster’s rugby team and the athletics and recreation department’s Anti-Racism Advisory Group. Her podcast provides listeners, and guests, with a space to learn and connect.

“It’s meant for important conversations including ableism, sexism, anti-black racism, feminism– all in and out of sports,” says Shank. “The podcast is everything I’m passionate about and I’m thankful that I was able to connect with this group and lead these discussions.”

In response to the October 2020 review of the Black Student-Athlete Experience at McMaster, the Athletics and Recreation department today shared an update on implementing the review recommendations.