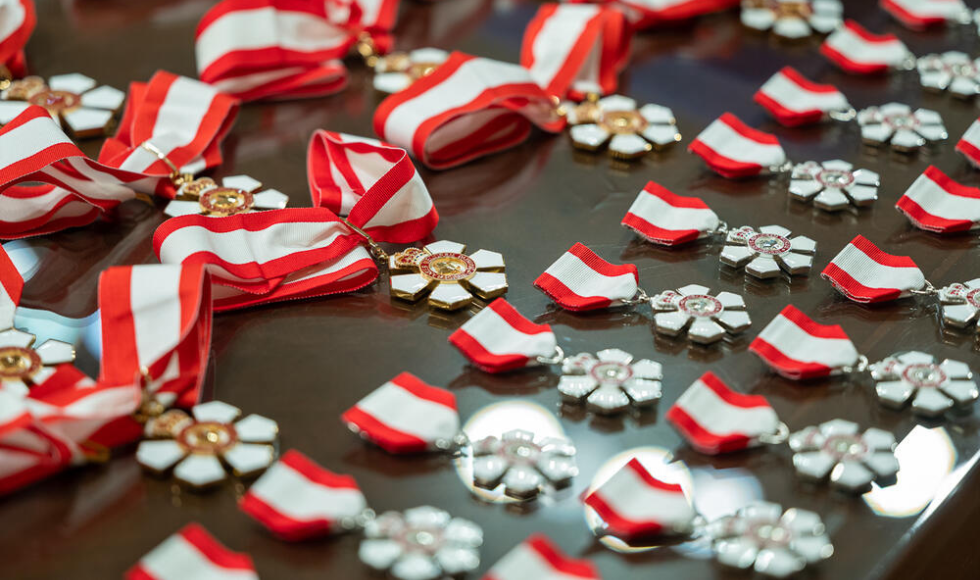 The Order of Canada is one of this country’s highest honours. Appointments are made for sustained achievement at three levels: Companion, Officer and Member. Photo credit: MCpl Anis Assari, Rideau Hall

One of the country’s highest honours, the Order of Canada recognizes the extraordinary contributions of Canadians from all sectors of society.

“Celebrated trailblazers in their respective fields, they are inspiring, educating and mentoring future generations, creating a foundation of excellence in our country that is respected throughout the world,” said Governor General of Canada Mary Simon of the appointees.

Over 7,600 people have been invested into the Order of Canada since it was created in 1967.

The appointees will receive their insignia during an awards ceremony to be held at Rideau Hall in Ottawa later in the year.

Read more about the McMaster graduates recognized for their extraordinary contributions to Canada:

Actor, comedian and producer Eugene Levy (‘70) has been recognized for elevating the stature of Canadian television on the international stage. Levy started his career on the popular late night comedy series Second City TV where he won two Emmy Awards for writing.

The actor is known for his comedic roles in both television and film, including the American Pie series, Best in Show and Schitt’s Creek.

In 2006 he received a star on Canada’s Walk of Fame and in 2008 was presented with the Governor General’s Performing Arts Award for lifetime artistic achievement.

The Hamilton native was awarded an honorary degree from McMaster in 2005.

Eva Grunfeld, who graduated from medical school at McMaster in 1986, has been recognized for her influential research in cancer prevention and survivorship care, particularly within a primary care setting. Grunfeld is the director of the Knowledge Translation Research Network in the Health Services Research Program for Cancer Care Ontario and the Ontario Institute for Cancer Research. She is also a professor at the University of Toronto.

Andreas Laupacis (Clinical Epidemiology & Biostatistics ‘87) has been recognized for his ongoing contributions to the field of medicine and to a broad range of health-care initiatives in Canada and around the world. The retired general internist is the editor (and former editor-in-chief) for the Canadian Medical Association Journal.

DeGroote School of Business graduate Gerald James Lozinski (MBA ‘67), along with his wife Joan Mary Lozinski, have been recognized for their long-standing support for the arts in Canada, with a special focus on dance excellence.

McMaster graduate Konrad Eisenbichler (ʼ73, ʼ74) has been recognized for his acclaimed interdisciplinary study of sexuality, gender, history, religion and literature in the Italian Renaissance era. The University of Toronto professor emeritus has authored, edited or translated over 30 books and has over 70 articles in peer-reviewed venues.

Frederick John Longstaffe, who was awarded a PhD in geochemistry from McMaster in 1978, has been named to the Order of Canada for his pioneering contributions to stable isotope geochemistry. Longstaffe is a distinguished professor at the University of Western Ontario and a Tier 1 Canada Research Chair in Stable Isotope Science.