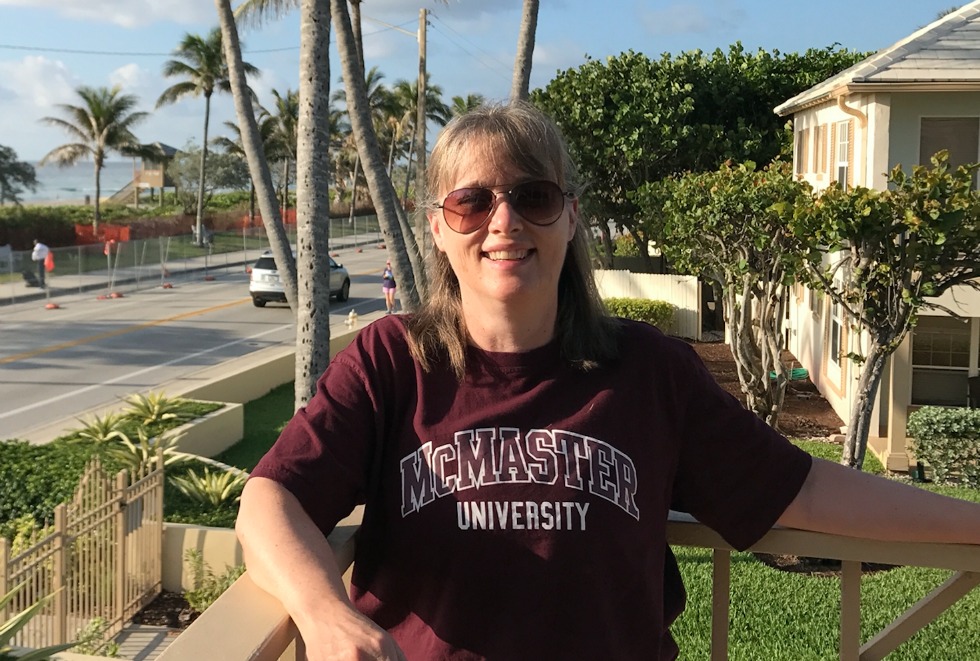 In 1981, Paula Turner, with no money and no support system, was forced to leave university. This week, she will walk across McMaster’s convocation stage to receive her degree in anthropology, completing a journey that began 36 years ago.

In 1981, Paula Turner was living in Ottawa, part-way through her second year of university. Originally from Calgary, she was far from home and working three jobs to put herself through school.

“Two of the jobs fell through,” she says. “I had no money and no support system, so I had to return to Calgary, but I always intended to go back to university.”

This week, Turner will walk across McMaster’s convocation stage to receive her undergraduate degree in anthropology, completing a journey that began 36 years ago.

“It was a bucket list item,” she says. “I just wanted the opportunity to finish what I had started and it’s been such a gift – this is so meaningful to me.”

The years after Turner first left university were busy ones. She was married, bought a house, then started a family, staying home for a number of years to raise her two children. “I volunteered in my community, I volunteered in schools, I was involved in my kids’ extracurricular activities,” she says. “I really loved being a stay-at-home mom.”

She often thought about returning to university and over the years, took courses at Ryerson and, in the early 2000s, was even accepted to the University of Toronto, but felt the timing wasn’t right to compete her degree. “I just wasn’t ready to dive in,” she says.

Shortly after, she enrolled in a one-year college program to become an educational assistant, and soon after, began a career at the Peel Board of Education where she has worked ever since.

It was in 2014, after a conversation with her son, who had recently earned his Master’s degree, that Turner knew she was finally ready to return to university.

“We were talking about the possibility of him doing his doctorate and I said, ‘Whatever you do, don’t have any regrets, just do what you need to do,’” she recalls. “Through that conversation, he just turned to me and said, ‘Mom, why not you? It’s your turn, it’s your time.’”

With her daughter about to graduate from university, Turner says the timing was perfect. “I had launched my kids,” she says. So, with the support of her children and her husband of 34 years, she applied, and was accepted to, three universities, but she says, right from the beginning, she felt most at home at McMaster.

“When I walked into the two homes my husband and I have owned, I’ve thought, ‘Yes, this is where I belong’ – I had that same feeling walking around campus,” she says. “Every time I visited, I was more and more convinced I was going to the right place.”

Once at McMaster, Turner was determined to make the most of her experience. She found her favourite places to study (for her, that was Innis Library) and became involved in mindfulness meditation in the Student Wellness Centre. Although she had been initially worried about the age difference between herself and other undergraduates, those concerns soon evaporated and she threw herself into her studies.

“I read everything – I wanted to learn everything and do everything I could,” she says. “I just wanted to soak it all in. I had waited for 30 plus years to go back. I wasn’t going to waste a minute of it.”

Turner had been inspired to apply to the anthropology program by her daughter, who had also studied anthropology at university and would often send research papers for her to read. Now, Turner was doing coursework of her own, spending time connecting with other students and with her professors.

“I felt supported from top to bottom,” she says. “My professors were all so interested to talk and to listen to the ideas that I had, I just really feel that it was such a great choice for me to go into that department.”

Turner says she also received strong support at home and adds that returning to university would not have been possible without her husband whom she calls “absolutely amazing.”

“That’s the thread that’s run through this – my support system was so far away the first time I was at university. This time has been so much more successful because I’ve had all these people around me.”

She plans to retire from the Peel Board of Education, and hasn’t yet decided what her next steps will be, but she says she’s grateful for her time at McMaster.

“Most students come out of high school and they go to university because they’re working towards a job,” she says. “I was very fortunate because I could make this about my learning. I was doing this for me – I’m so blessed to have had that opportunity.”