Old drug may be key to new antibiotics 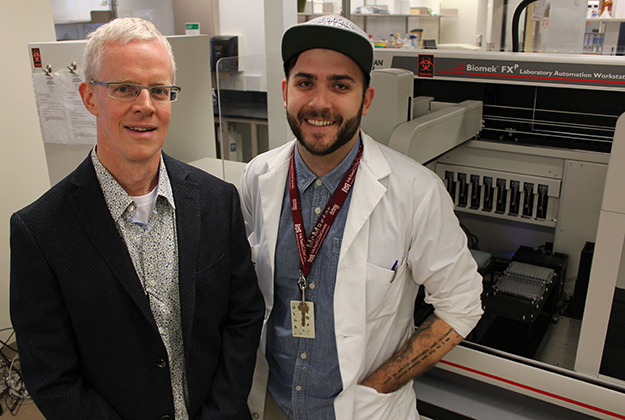 Principal investigator and McMaster professor Eric Brown (left) with Jonathan Stokes, a PhD student who worked on the paper. The team's findings were recently published by the open-access journal eLife.

McMaster scientists have found that an anticonvulsant drug may help in developing a new class of antibiotics.

Although dozens of antibiotics target what bacteria do, their study looked at how a certain part of bacteria is created — and they found there is a way of stopping it.

The McMaster study found that an anticonvulsant drug called lamotrigine is the first chemical inhibitor of the assembly of ribosomes in bacteria. Ribosomes are the molecular machines in cells that create all proteins. Many antibiotics attack what ribosomes do.

However, the McMaster team found that lamotrigine stopped ribosomes from being created in the first place.

The paper has been published by the open-access journal eLife.

“Ribosome-inhibiting antibiotics have been routinely used for more than 50 years to treat bacterial infections, but inhibitors of bacterial ribosome assembly have waited to be discovered,” said Eric Brown, principal investigator of the study and a professor of biochemistry and biomedical sciences at McMaster’s Michael G. DeGroote Institute for Infectious Disease Research.

“Such molecules would be an entirely new class of antibiotics, which would get around antibiotic resistance of many bacteria. We found lamotrigine works.”

Jonathan Stokes, a PhD student who worked on the paper, added that the team was able to identify the precise target for the lamotrigine within the bacteria, allowing the researchers to be clear in their understanding of ribosome assembly and the therapeutic applications of these types of chemicals.

The team used high throughput screening technologies of the Centre for Microbial Chemical Biology at McMaster to make the discovery. The study was funded by the Canadian Institutes of Health Research, the Michael G. DeGroote Institute for Infectious Disease Research, and the Natural Sciences and Engineering Research Council.