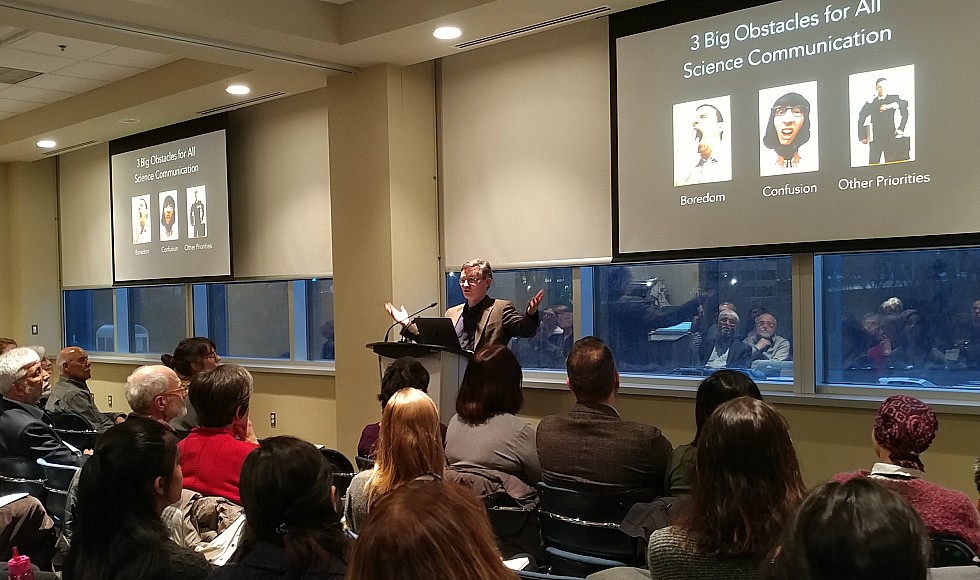 As the former editor-in-chief of Scientific American and deputy editor at Quanta Magazine, award-wining science writer John Rennie knows a thing or two about communicating science.

From unravelling the mysteries of the universe and the natural world alike, to challenging climate change denial and creationism, throughout his career Rennie has helped make complex scientific research accessible to the public and addressed some of the most controversial topics in science today.

Rennie recently shared his unique insights with the McMaster and Hamilton communities at his talk, The Unprecedented Challenges, Rewards and Risks of Science Writing Today, the inaugural lecture in the Science Stories science communication speaker series developed by the School of Interdisciplinary Science (SIS).

“Science communication gives us a chance to be involved in this fantastic adventure and to be amazed by science as we’re doing it, then to share that wonder and the sense of why it’s important with other people,” says Rennie who spoke to 100 students, staff, faculty, alumni and community members about his experiences as a science writer and editor, the journalistic process, and how to communicate science effectively.

Rennie also spoke about the issue of public distrust of scientists and scientific evidence, how the public forms opinions about scientific issues ­– particularly polarizing topics like climate change and vaccinations – as well as how the emergence of fake news is impacting the public’s understanding of science.

Ana Campos, director of the School of Interdisciplinary Science, gave introductory remarks at the talk, identifying science communication as a key priority for SIS.

“The School of Interdisciplinary Science is committed to building science communications skills in our students and providing opportunities for them to put these skills to work in the community,” says Campos. “This lecture series is a fine example of the commitment of our faculty to science communication in the school.”

During his visit, Rennie, also an instructor in the Science, Health & Environmental Reporting program at NYU, took part in a Q&A with students in a fourth-year science communication course taught by Katie Moisse, a new faculty member in SIS and former digital health editor at ABC News.

While at McMaster,  Rennie sat down with the Daily News to talk about what he thinks scientists should keep in mind when communicating with the public:

“Nobody needs to read your stupid science article”

Writing for general audiences is very different from writing for students or peers, says Rennie. When you’re writing for the general public, it has to be interesting or they won’t read it. “If they’re reading your article and they get bored, or confused, or if anything else occurs to them, they will go away and never come back to this article, ever again,” says Rennie. “When you’re writing your article, your job is to hold on to people as long as you can, all the way through to the end of the article, and make sure they get through it.”

“Scientists need to clearly understand the audience they’re writing for and that’s the general public,” says Rennie. “They may be an educated general public, but this is an audience that’s going to need to be talked through concepts and you need to know that there are also going to be certain concepts that you’ll need to gloss over a little bit.”

Why should readers care?

Scientists have to help the public care about their research, says Rennie. “You have to be presenting your work in terms they would find interesting or exciting. Why would people care about this? What would people get out of this? Sometimes it’s obvious why they should care, like if there’s a new therapy that’s been developed – that’s immediately valuable to them. But not all fields and all types of research have obvious types of answers to this that immediately pay off, so then it helps to think of it as a story.”

“We are story telling creatures and we respond to stories,” says Rennie. “Think of it as a mystery story. In a mystery, something happens in the beginning that sets up a whodunit, then you have people who are looking for clues and coming to an answer of some kind, well that’s the scientific process. So thinking about what you’re doing as a detective story is a way of being able to pace it out in your own mind and if you’re not used to thinking about the drama of these things, it’s maybe sort of a model that you can use.”