Nobel laureates on why the Nobel Prize matters: A MacTalks discussion 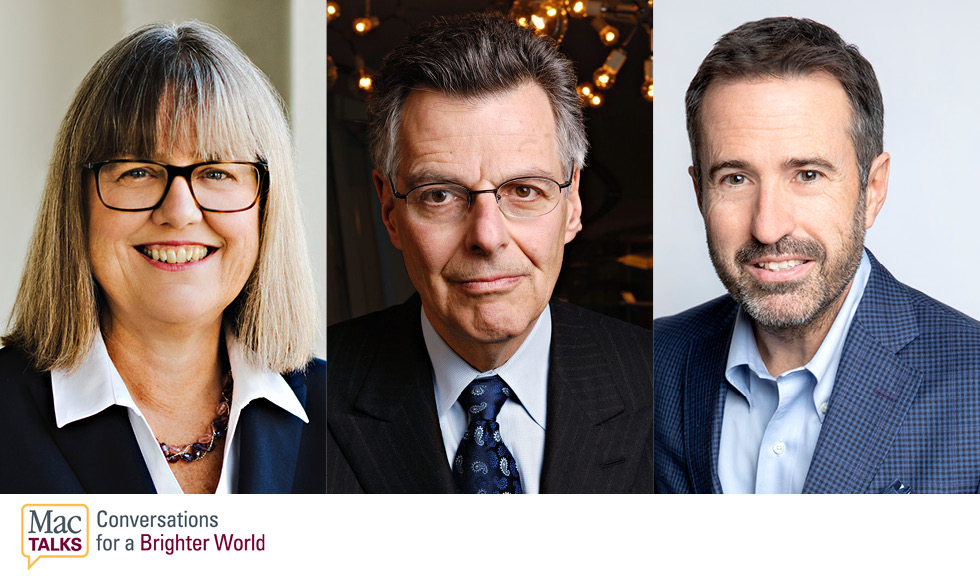 Join Mac grads and Nobel laureates Myron Scholes and Donna Strickland in conversation with author and innovator John Stackhouse in the third MacTalks event: Why the Nobel Prize Matters.

Join Mac grads and Nobel laureates Myron Scholes and Donna Strickland in conversation with author and innovator John Stackhouse in the third MacTalks event: Why the Nobel Prize Matters. Click here to register for the free virtual event on Wednesday Oct. 7, from 7 p.m to 8 p.m.

Oct. 5 is the first day of Nobel week — it’s actually six consecutive weekdays — a glamorous time in academia, when researchers whose “achievements have conferred the greatest benefit to mankind” are honoured for their life’s work.

But what does it actually mean for the winners? Does research or teaching get easier or harder? Do people point at you or stop you as you make your way across campus? And how does winning the Nobel change the trajectory of your life?

Join McMaster grads and Nobel laureates Myron Scholes ’62 and Donna Strickland ’81 as they talk about the impact of receiving one of the world’s most high-profile and prestigious prizes.

Why the Nobel Prize Matters will be moderated by John Stackhouse on Wednesday, Oct. 7, from 7 p.m. to 8 p.m.

Donna Strickland was co-recipient of the Nobel Prize in Physics 2018. With her PhD supervisor, Gérard Mourou, at the University of Rochester, she developed chirped pulse amplification, which has applications in industry and medicine, including cutting a patient’s cornea in laser eye surgery, and machining small glass parts for use in cellphones. She graduated in engineering at McMaster in 1981 and was presented with an honorary degree from the university in 2019.

She was named Companion of the Order of Canada and was a research associate at the National Research Council Canada. In 1997, she joined the University of Waterloo, where her ultrafast laser group develops high-intensity laser systems for nonlinear optics investigations.

Myron Scholes was co-recipient of the 1997 Nobel Prize in Economics for a new method to determine the value of derivatives. This methodology paved the way for economic valuations in many areas. He graduated from McMaster with an economics degree in 1962 and was presented with an honorary doctorate from the Faculty of Business in 1990. He earned his PhD and MBA at the University of Chicago.

He is the Frank E. Buck Professor of Finance, emeritus, at the Stanford Graduate School of Business. He has consulted widely with financial institutions, corporations and exchanges and continues to lecture for academic groups and other organizations around the world.

John Stackhouse is a bestselling author and one of Canada’s leading voices on innovation and economic disruption. He is senior vice-president in the office of the CEO at Royal Bank of Canada, leading the organization’s research and thought leadership on economic, technological and social change. Previously, he was editor-in-chief of the Globe and Mail and editor of Report on Business. He is a senior fellow at the C.D. Howe Institute and the Munk School of Global Affairs and Public Policy. His latest book is Planet Canada: How Our Expats Are Shaping the Future.

Click here to learn more or to register for Why the Nobel Prize Matters, a free MacTalks event.

This is the third instalment of MacTalks, an ongoing series of virtual conversations featuring McMaster researchers at the forefront of tackling some of the world’s most pressing challenges and bringing a global view to the many issues we face today.

The second instalment featured Gerry Wright,  the inaugural lead of McMaster’s new Global Nexus for Pandemics and Biological Threats and scientific director of the Michael G. DeGroote Institute for Infectious Disease Research, and author and journalist Maryn McKenna, a senior fellow at the Center for the Study of Human Health at Emory University.

Fall convocation: What you need to know

Please join our community in celebrating our students’ outstanding achievements and the installation of President David Farrar at the virtual fall convocation.

How can instructors create their own interactive content for online courses? How can using open platforms increase equity and inclusion in teaching? Where can instructors find high-quality, openly licensed educational materials? Learn about these topics and more during Open Access Week.